Meteorite class crashes in at UTD 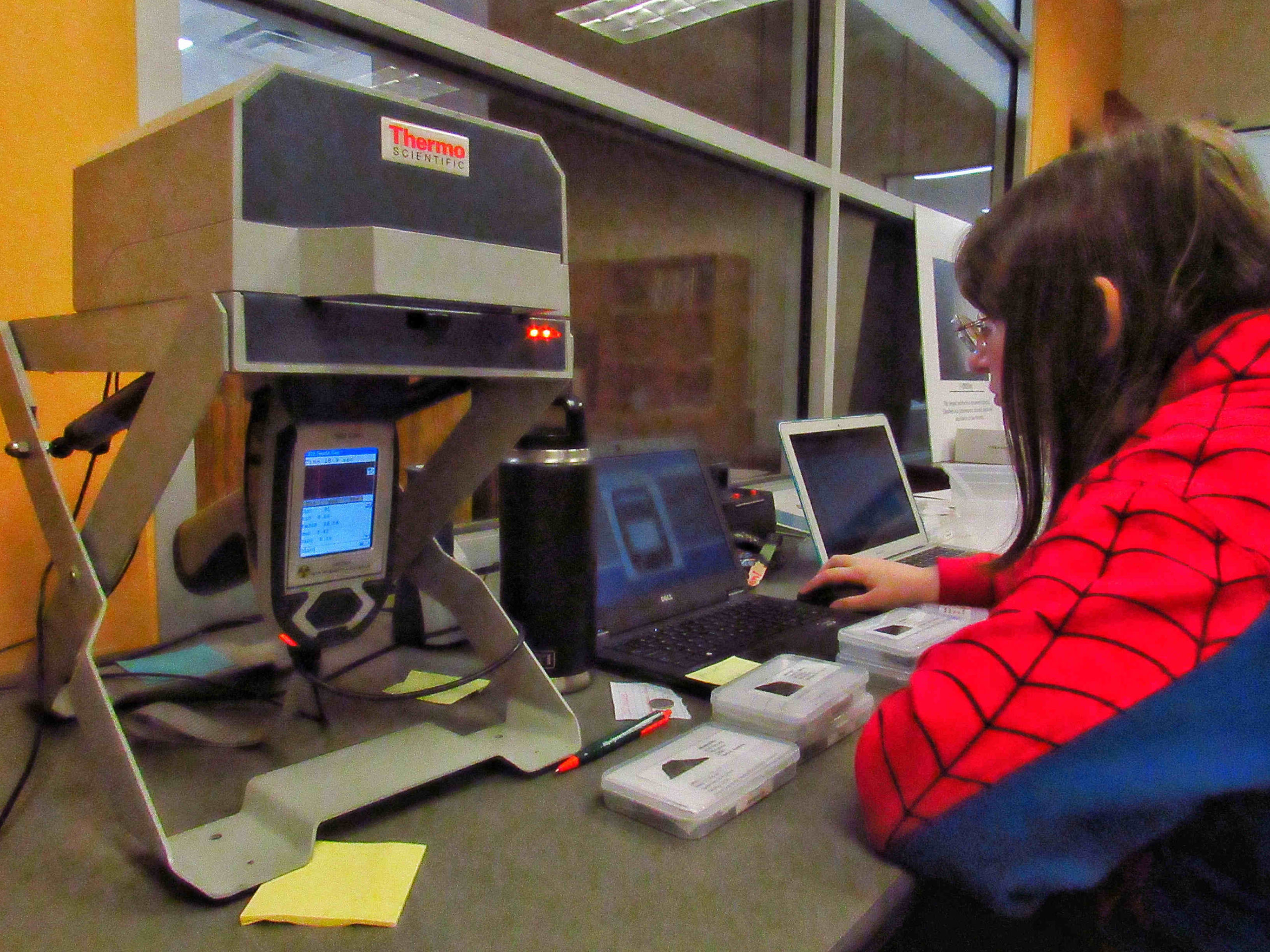 A student examines a meteorite in class. Photo by Andre Averion | Distribution Manager

As one of the catalog’s newest classes, Comets Love Meteorites allows students to study meteorites from around the world.

Otherwise known as GEOS 2340, this class is taught in ROC 2.203 under the tutelage of geoscience professor Bob Stern and associate professor of instruction Randy Griffin. Taught on a trial basis this semester, GEOS curriculum includes the history of our solar system, the asteroid belt and meteorites. Students can explore the unique structure and development of meteorites and the impact they have scientifically, geographically and historically.

“If you teach a course on meteorites and just make people read books about it and memorize stuff, it’s terribly boring, but having samples changes everything. You can touch these [meteorites],” Stern said. “When we were telling students to go over them, find one thing to do a report on, and then they were like ‘we get to take these home? What if it’s stolen, or what if we drop it?’ Like, I mean, they were really nervous because to them, it’s something that is very, very valuable. The reality is, the real value is the chance to connect students with the solar system so powerfully.”

Not only do students get to engage in lectures and presentations inside the classroom, they also get access to the Meteorite Research and Education Lab at ROC 1.213A. In this research lab, students get hands-on experience conducting specialized meteorite analytics. Using a powerful X-ray fluorescence gun (XRF), students test rock samples to see if they may be meteorites in disguise based on their mineral properties. Even students not enrolled in the class are welcome to help in the lab — with Stern’s permission — or bring in their own rocks for testing.

“The students that work with this in the lab, they are doing 99% of the work,” Griffin said. “They’re helping us establish a protocol that when people bring in stuff asking, ‘is this a meteorite,’ and they go through and do all these things that you can write up a little report template. So we’re very interested in what our student can do, really carrying the other leg.”

GEOS 2340 debuted this semester thanks to the collection Professor Stern received from series of donations around the world. UTD’s collection hosts meteorite samples as old as the solar system that crash landed in locations as diverse as Russia, Australia, the Philippines and even our own city of Dallas.

“We have worked with the Perot Museum because they’ve had a really nice mineral display,” Stern said. “They got that whole fourth floor about the solar system and the universe, and no space for meteorites. So I talked with the curator of the minerals and I said, you know, if you guys find the meteorites, let us know. Recently she said, you know, we found a meteorite. It fell and it was something they found in Duncanville in 1961, and now it’s here [in the laboratory].”

Currently, the class is mainly composed mostly of freshmen. Enrolled students engage in discussion after learning about a particular meteorite sample. However, any UTD students with an interest are welcome to stop by the laboratory adjacent to the geoscience club to ask questions or hang out.

“I came into this lab knowing next to nothing about meteorites,” said lab technician Kaitlin Pickens. “I mean, I thought they were cool. And I wanted lab work. So Dr. Stern was like, ‘Hey, you want to work in the meteorite laboratory,’ and I was like sure, why not? And I’ve learned so much about meteorites just by being around them. I have a much greater respect for them now than I ever did”.

This class is expected to return in fall of 2023 if the class is deemed a success by administration. Students who meet the honors requirement, or otherwise are given permission, can enroll in the class as an extracurricular, which is expected to grow as student interest increases. By getting access to these meteorites, Stern said, UTD is giving students a unique opportunity.

“These are the oldest things that anybody will ever touch,” Stern said. “There is nothing older in this solar system than a meteorite. So, when you put your hand on that meteorite, you will touch something that’s 4.56 billion years old.”