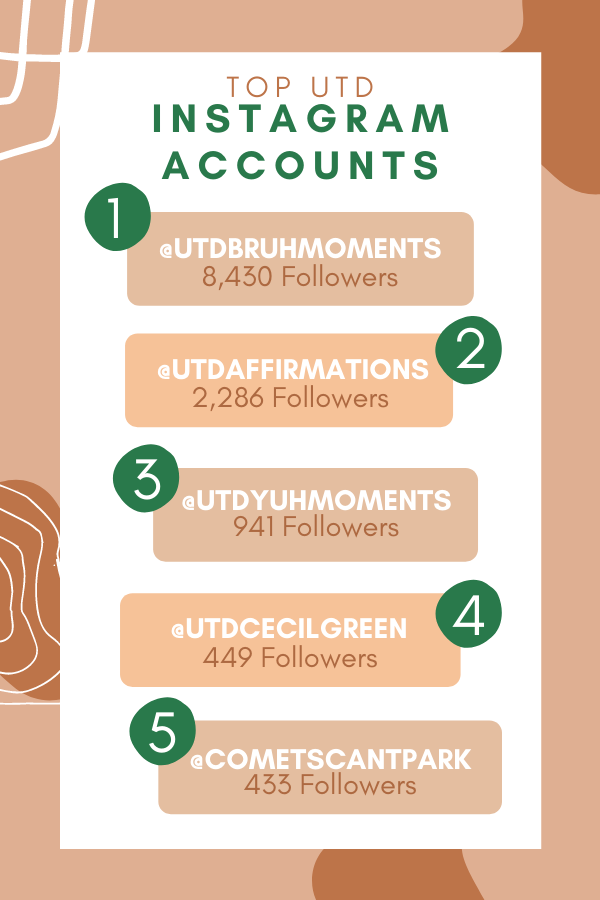 From statues to squirrels, from parking blunders to “Bruh Moments,” Instagram is filled with UTD-specific accounts dedicated to covering various aspects of the Comet experience. Despite their differences in content, they share a sense of community that goes beyond any snappy caption.

Because of the anonymous nature of the accounts, most of their managers spoke on the condition that they would not be named. Their structures vary, from an individual or a team collecting submissions to curating posts. Comets Can’t Park (@cometscantpark), for example, has two moderators looking for vehicles that break more than one parking rule at once. UTD Sunsets (@sunsets_at_utd) was an inherited account, whose current administrator shares both their own nature photography and others’ on the page.

Cecil H. Green’s account, previously featured by The Mercury, is run by neuroscience senior Rohini Kallianpur. Kallianpur posts portraits of the statue’s head outside Green Hall, along with the various accessories with which students and community members decorate it. She began posting as a way to engage with campus life and culture.

“UTD is pretty new, so traditions that you’ll see at other schools don’t exist here yet. I thought it would be fun to start something that might continue on beyond me,” Kallianpur said.

Other accounts focus on the University’s meme potential—or, to hear “UTD Wrestling” student Dwayne Johnson (@utd_dwaynation) tell it, documenting their day-to-day experiences. “The Rock” cites his inspiration as UNT’s similar John Cena account (@unt_cenanation) and hopes to bond with fellow Comets while making them smile.

“I think UTD as a whole lacks energy and school pride. Instagram accounts are an easy way to bring some extra joy into the lives of students, so it’s really no wonder there are so many of them,” @utd_dwaynation said.

Nine accounts responded to direct messages; 12 did not, most without recent posts. The oldest page still on the app is UTD Squirrels (@squirrelsutd), which ran from May to Oct. 2016. It was followed by Cecil H. Green in 2018, then Bruh Moments (@utdbruhmoments)- which surpasses many official University pages at over eight thousand followers, pursed by Affirmations (@utdaffirmations) at just over two thousand. Tobor Sightings (@toborsightings) takes the medal for shortest shelf life, with posts that span only two days, beating out the brief Nicki Minaj fan-page’s 15 (@utdbarbzz).

“Man, those jabronis make me laugh!” @utd_dwaynation said. “I’ve been thinking about making a joke account myself actually, but between wrestling classes, movie shoots, and lucrative Fortnite deals I just don’t have the time.”

Both UTD Chairs (@utdchairs, not to be confused with the discontinued @chairsofutd) and Sleeps (@utdsleeps)—who review furniture and naptime spots around campus respectively—rely on their own investigations around the University for content generation.

“My inspiration for this account came from exploring campus. seeing the variation in different interior design, I felt like it needed to be documented; and after seeing the [conical] chair in ATEC, I knew I had to document the different chairs around UTD,” Chairs wrote.

Sleeps stepped up- or laid down, rather- to fill what she saw as a gap in Instagram coverage.

“I was just sitting there one day thinking hmm what if there was an account that just rated the best places to sleep on campus,” Sleeps said. “I decided I shall make the sleep rate account. All the other UTD accounts inspired me… as well as sleep.”

That interconnectedness between accounts gave their answers a sense of community- something that many felt arose from the University’s student culture as a whole. Trees theorized that the plethora of accounts is tied to the “misfit” nature of its student body and agreed with Green on the newness of UTD’s campus culture, with a lack of solid ground that lends itself to many different interpretations.

“Our undergraduate student body has only existed for less than 50 years, with freshmen only being here for about 30 years,” Trees said. “Even then, the university didn’t grow much until the mid-2000s, so it makes sense that always-online internet culture would become the predominant culture on campus!”

It’s not all sunshine, however. Trees criticized Bruh’s focus on negative interactions with the university, for instance, and many pages have been abandoned over the years. Yuh Moments apologized for their lack of new posts, admitting that they were struggling to “find the ‘yuh’” lately. Still, a significant portion of these accounts are going strong, lasting through lockdown and pushing forward into the future- Bruh has even begun using their platform to fundraise for human rights causes, emphasizing social justice and “[passing] the kindness forward” in their interview.

“Accounts like Bruh Moments give students a common point of conversation for things that happen at UTD and provide a way to stay connected… Being able to say “bruh” and laugh about something on the Bruh Moments platform enriches students’ community experience and reminds everyone to stay positive,” Bruh said. “We believe positivity goes a long way, and we hope our impact is one that makes Comets smile.”

After all, while spin-off Instagrams are a silly part of student life, they can bring some much-needed levity to a stressful time. Sleeps and Bruh Moments are glad to bring smiles to students’ faces. Green enjoys the engagement with others on campus. Sunsets is happy with the impact that submissions-based accounts can have on the student body.

“I really value other students sending me their photos as I believe it helps build a strong student community centered around displaying the natural beauties of UTD’s campus,” Sunsets said.

Perhaps there’s hope for the pages on pause, too, even in the midst of global crisis.

“Reflecting on everything that students have gone through, I think I may start posting again,” Trees said. “I may as well play my part in making UTD a meme paradise.”