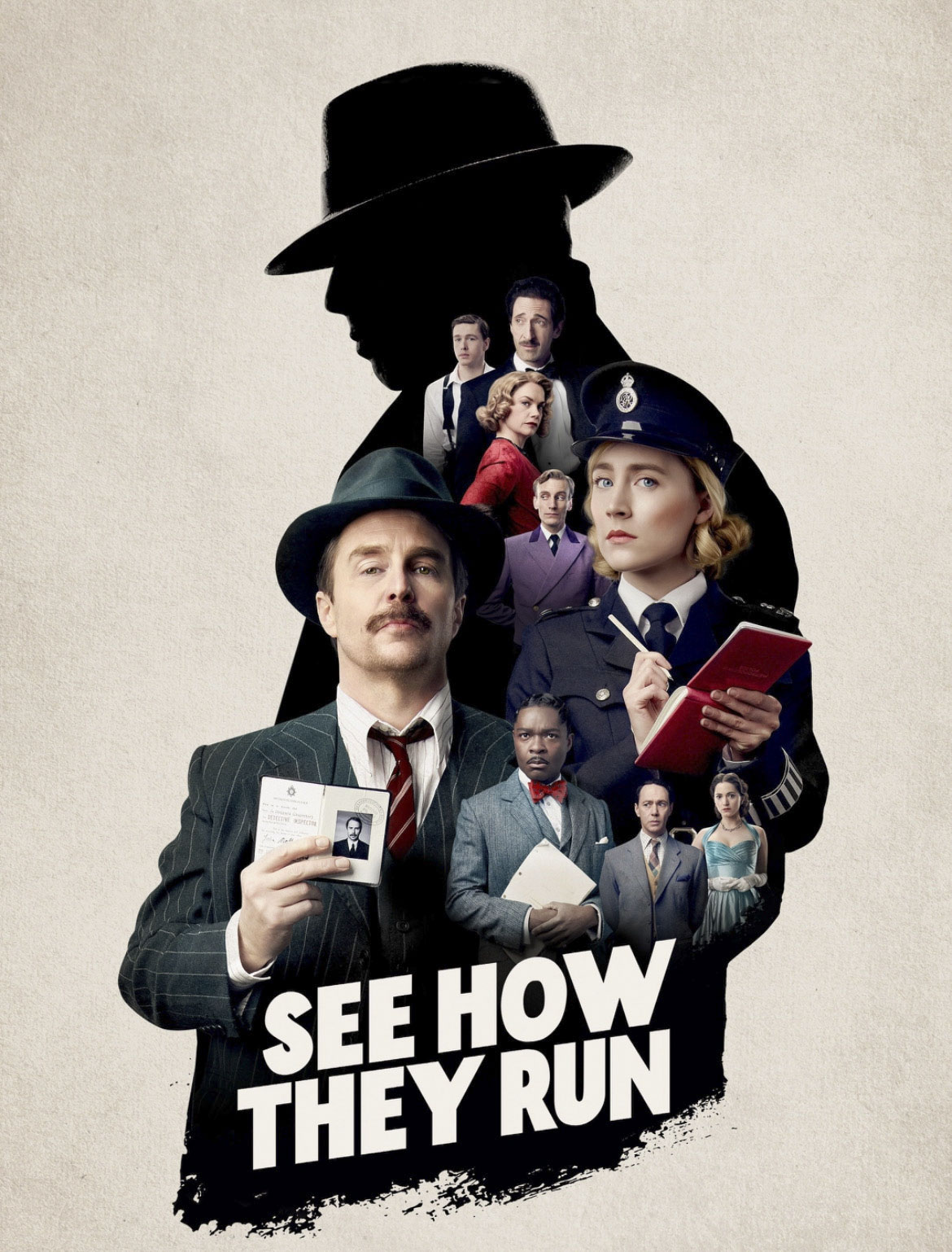 Murder mystery wows with a vintage aesthetic and quirky cast.

If Agatha Christie and Wes Anderson had a lovechild, it would be “See How They Run,” a classic ‘whodunnit’ that makes up for its predictability with a delightful cast and a whimsical filming style. “See How They Run” completely immerses viewers in the entertainment industry of 1950s London. The film may rely too heavily on its actors, but it proves a whimsical gem amongst dry humored murder mysteries.

The film begins with the death of repugnant Hollywood director Leo Köpernick (Adrian Brody), who was creating the film adaptation of Agatha Christie’s long running play “The Mousetrap.” Motives for the murder abound, as Köpernick’s disrespectful and crude attitude earned the disdain of producers, writers, and actors alike. It is up to jaded Inspector Stoppard (Sam Rockwell) and rookie Constable Stalker (Saoirse Ronan) to find the killer with more than a few bumps along the way.

“The Mousetrap” — which the film is centered around — is the longest running play in history, still being shown to this day. Fittingly drenched in British theatre lore, “See They How They Run” pokes fun at the absurdity of both the entertainment industry and mystery films. The filmmakers keep the dark tone balanced with plenty of puns and cartoonish characterization and use split screens and other dramatic filming sequences to create a matching aesthetic.

The film instantly had me sold on the dynamic of peppy Saoirse Ronan and grump Sam Rockwell in a comically small cop car. Unfortunately, the duo was heavily underutilized. The two leads had great potential, and their friendship should have been a highlight of the film. Unfortunately, their interactions were so limited that their relationship stayed relatively stagnant, making their bond seem one dimensional. Ronan and Rockwell remained a delight on screen, but at times were overshadowed by the band of charming murder suspects.

Constable Stalker is vivacious, naive and brings a flash of joy to every scene she’s in. Her comedic timing and fanatic interest in theatre makes every interrogation feel personal, and her obsession with theatre lightens the tone.

As another layer of irony, the entire film is a satire of theatre, and the rest of the cast is coincidentally made up of actors well-seasoned in British television and theatre.

The murder suspects were the perfect whodunnit cast. Despite their limited screen time, they all performed their scenes with intense warmth and fervor and made their personalities crystal clear with just a few lines of dialogue. Harris Dickinson was a standout actor in this film. His portrayal of Dickie Attenborough screams lead man while layering undertones of comical sensitivity and giddiness, erasing the stereotypical characterization that plagues Agatha Christie knock-offs.

While “See How They Run” follows the blueprint of comedic murder mysteries in a visually stunning mash of quirky personas, at times, it is hard to distinguish satire from lazy writing. Regardless of the director’s true intentions, “See How They Run” is sure to go on British film fanatics’ comfort lists.