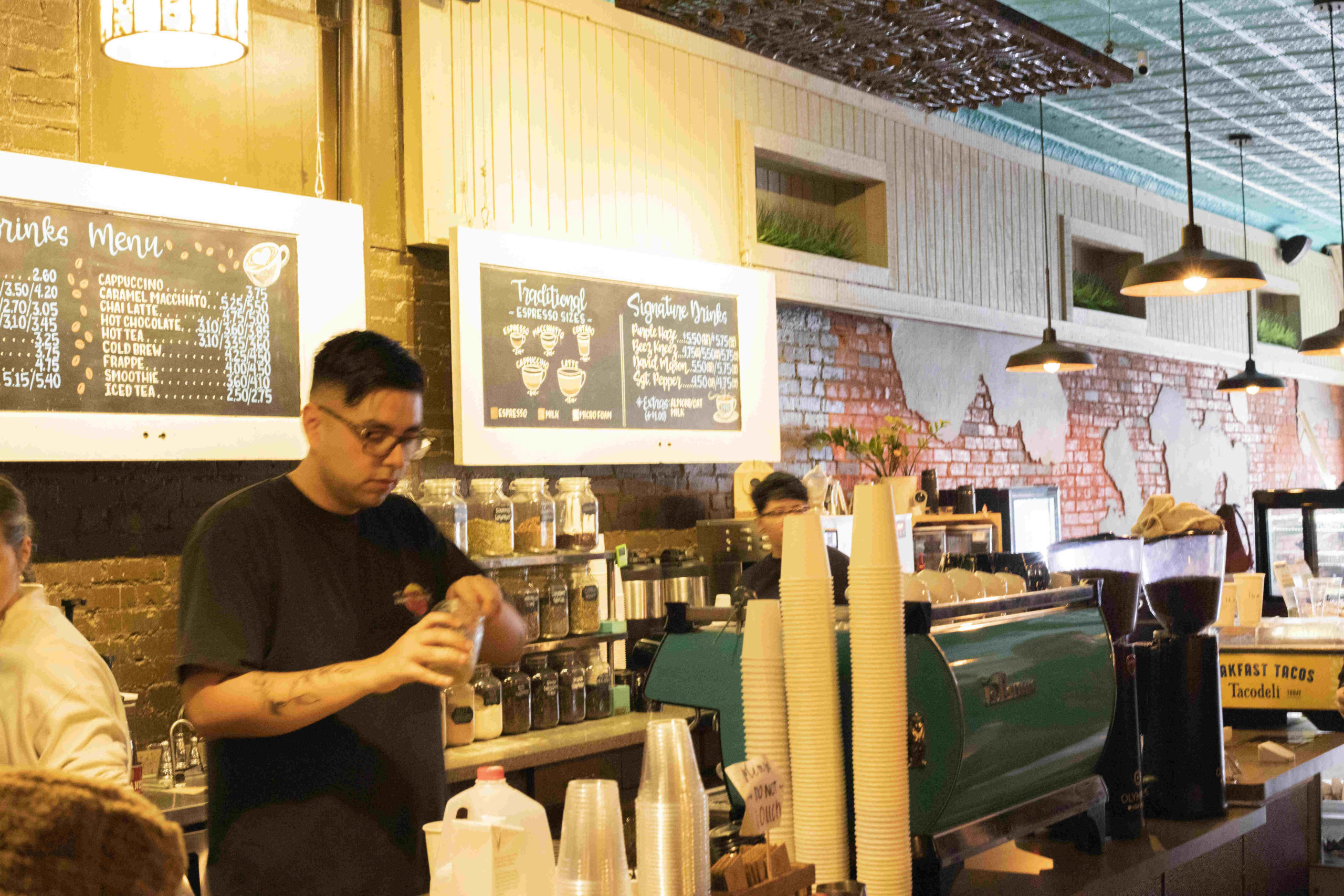 A large, refillable cold brew bottle just 15 minutes away. Do I have your attention? If so, the 1418 Coffeehouse might be the next spot for you to get your fix.

Located in Historic Downtown Plano, 1418 is a lively spot with many options and amenities for the prospective coffee consumer. Refillable cold brew to-go, beans for at-home coffeemaking and a surprising amount of food options round out the highlights of non-cold brew consumables. It’s not exactly within walking distance, but it is near campus if you’ve got a car or a friend who can give you a ride.

1418 tends to be a bit livelier than the average coffee shop, as it is generally filled with students and workers lining the couches, chairs and stools that comprise the café. The music is nice, but if you’re looking for a quiet study session, a good pair of headphones would probably be wise. The wifi is decent: not too slow but not light-speed either about seven Mbps down and one Mbps up. I wouldn’t rely on it for a turning in a very large project, but your general Word documents should be fine.

There are four options to really look at for lattes, being the signature drinks. While the Purple Haze – a vanilla-lavender drink – is the most popular mix, I ended up getting the Bee’s Knees. Unsurprisingly enough, it was the bee’s knees, with the ratio of honey and cinnamon not actually overpowering the coffee flavor. The price of the signature lattes is standard for a “special drinks” affair, at $5.50 for 12 oz. drink. But what about the cold brew?

Well, if you get the cold brew in a refillable bottle, it’ll run you around ten dollars the first time, with a $2 refill cost. And be warned: this is black cold brew, so if you’re not a regular black coffee drinker I’d highly recommend cutting it down with some milk and a sweetener of some kind at home. That said, it is a great cold brew for the black coffee enjoyers, and it will keep you going as long as your mental willpower will let you.

As for food, there is a good selection of $7.50 sandwiches to have. I had the Lucy, a chicken salad croissant sandwich that went down easy and filled me up surprisingly well. A choice between regular and jalapeño chips combined with a $9 drip coffee combo option makes it one of the best combo deals I’ve seen from a café. If only other cafés would just bundle their food with their coffee. (I missed out on the window for the tacos, but they’re available for $3.50 until noon). But the unique part about 1418 isn’t even the standard café fare: it’s the pies.

What do Deep Ellum and 1418 have in common? Apparently, they’re both locations where you can sample some of Emporium Pies’ selection, with 1418 getting deliveries in twice a week. Up to date with the seasonal flavors of the bakery, I was able to get a slice of blueberry rhubarb, but the standard Hot Operator and several other options were also available. At about $6 a slice, it is a bit expensive for a dessert, but it is well worth it if you can pick it up: it’s a much shorter drive and a lot easier to park at 1418 than it is at Emporium Pies’ home location.

1418 Coffeehouse is a lively spot with surprising options and a tasty latte. If not for the latte, you should go for the cold brew. If not the cold brew, the pies. If not the pies, the sandwich combo…I could go on. With excellent customer service on top of everything else, 1418 is an excellent spot to get your fix.