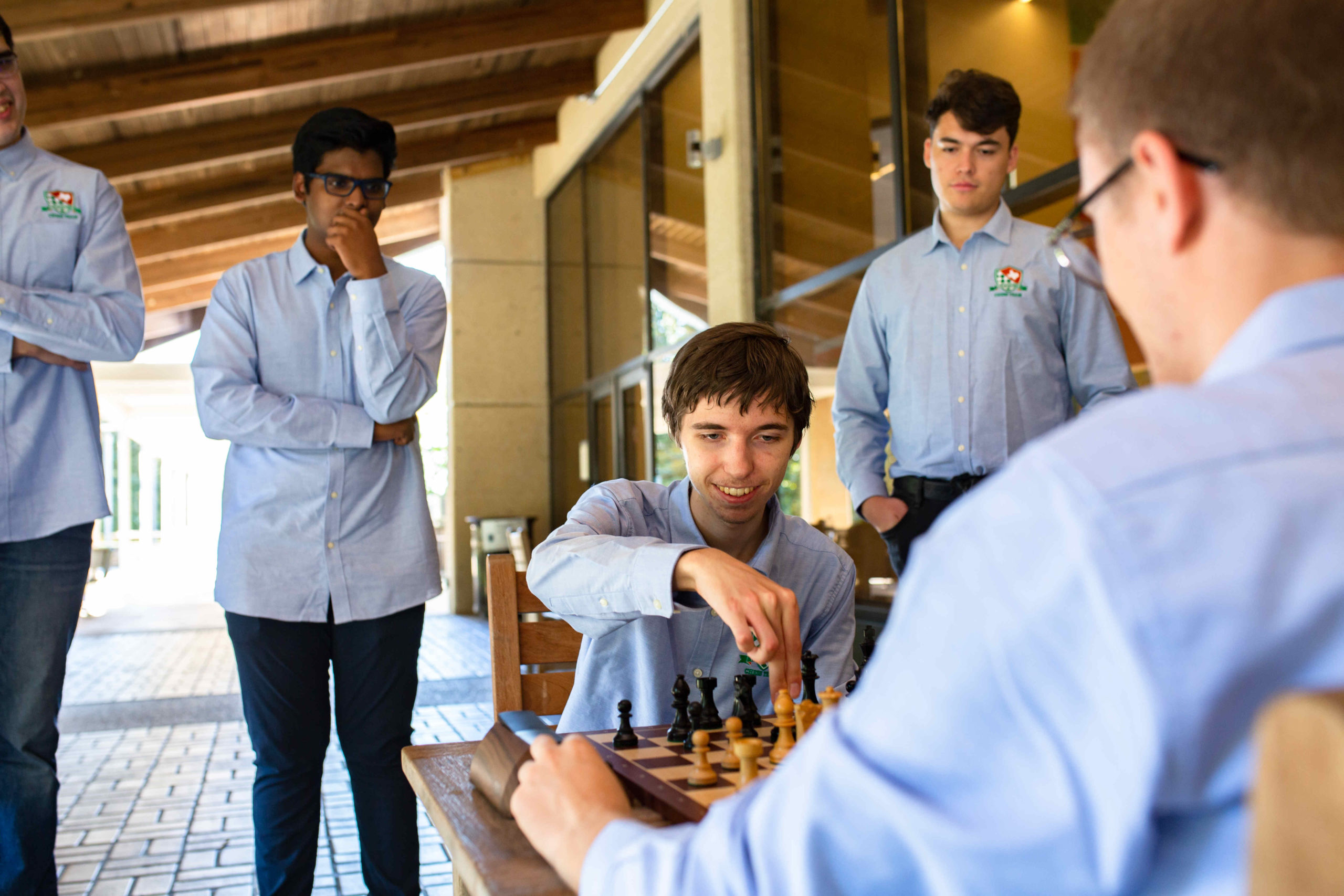 Brodsky plays against a fellow teammate outside the Student Union while other teammates look on. With a return to in person classes, the team hopes to hold an in person intramural for the community at large to participate in later in spring. Photo courtesy of Audrey Ruliawan

In a world filled with knights, rankings and timers, UTD’s chess team practices their game with excitement as tournaments start to reopen for in-person matches.

For the 18th time, UTD’s chess team has qualified for the President’s Cup, also known as the Final Four of College Chess, where the top four college chess teams in the country compete for the national title. Since fall 2020, the team has been conducting online practices and attending virtual tournaments. Despite the change in modality, the chess team members have still been spending several hours a week practicing for upcoming virtual and in-person tournaments, while balancing school, personal commitments and maintaining their rankings as international masters and grandmasters.

The President’s Cup will be held around the beginning of April in Lubbock, allowing the team to finally play in person; the team had previously qualified for the 2020 President’s Cup, but it had been canceled due to COVID-19. Now, as tournaments begin to allow in-person attendance again, the members have a chance to relive the tangible experience of competing in chess.

“You can sit in your apartment and play for an hour, two hours, and play these really fast games, so you can get quite a bit of playing time that way,” said Jim Stallings, the director of UTD’s chess program. “But it’s not quite the same as training for being right opposite a person, where they sense what you’re doing, and you sense what they’re doing, and it’s a different experience. That’s why we really need to be able to meet in the team room, which [the members] will be able to do when school reopens, and then we can play over the board.”

Competing in chess tournaments online has its disadvantages. There are increased amounts of strain put on players’ eyes, as some tournaments last hours and players must stare at a computer screen for extended periods. Additionally, the setup for these tournaments is not always easy; for example, players might have to arrange several cameras to prove that they are not cheating. For these reasons, international master David Brodsky, a sophomore computer science and math double major on UTD’s chess team, shares his excitement for being able to play and practice chess in person again.

As there are still a few months until the President’s Cup, the team practices together for about four to five hours per week studying games, potential chess opponents and different tactics. Outside of team practices, players individually spend a varied number of hours each week refining their skills and improving their openings.

“With the coach and other members, [we train] maybe six hours a week, and then by myself, at least another 15 hours a week,” said Guillermo Vazquez, a computer science graduate student and an international master on the chess team.

Tournaments and practices are not the only aspects of UTD’s chess team that will be moving to in-person. Chess intramurals will also be hosted this semester to expand UTD’s chess community. After the program’s success in organizing UTD’s chess intramural in fall 2021, the team is now hoping to introduce more activities and prizes for their spring 2022 intramural. More information about event specifics will be posted on the chess team’s social media as in-person viability is monitored.

“[Chess intramurals] are another way to allow for interaction between team members and the rest of the student body,” said Julio Catalino Sadorra, the chess team’s head coach. “It’s going to be a busy and exciting semester, and hopefully, it’s safe as well…it’s just amazing to see the students come out and play live.”