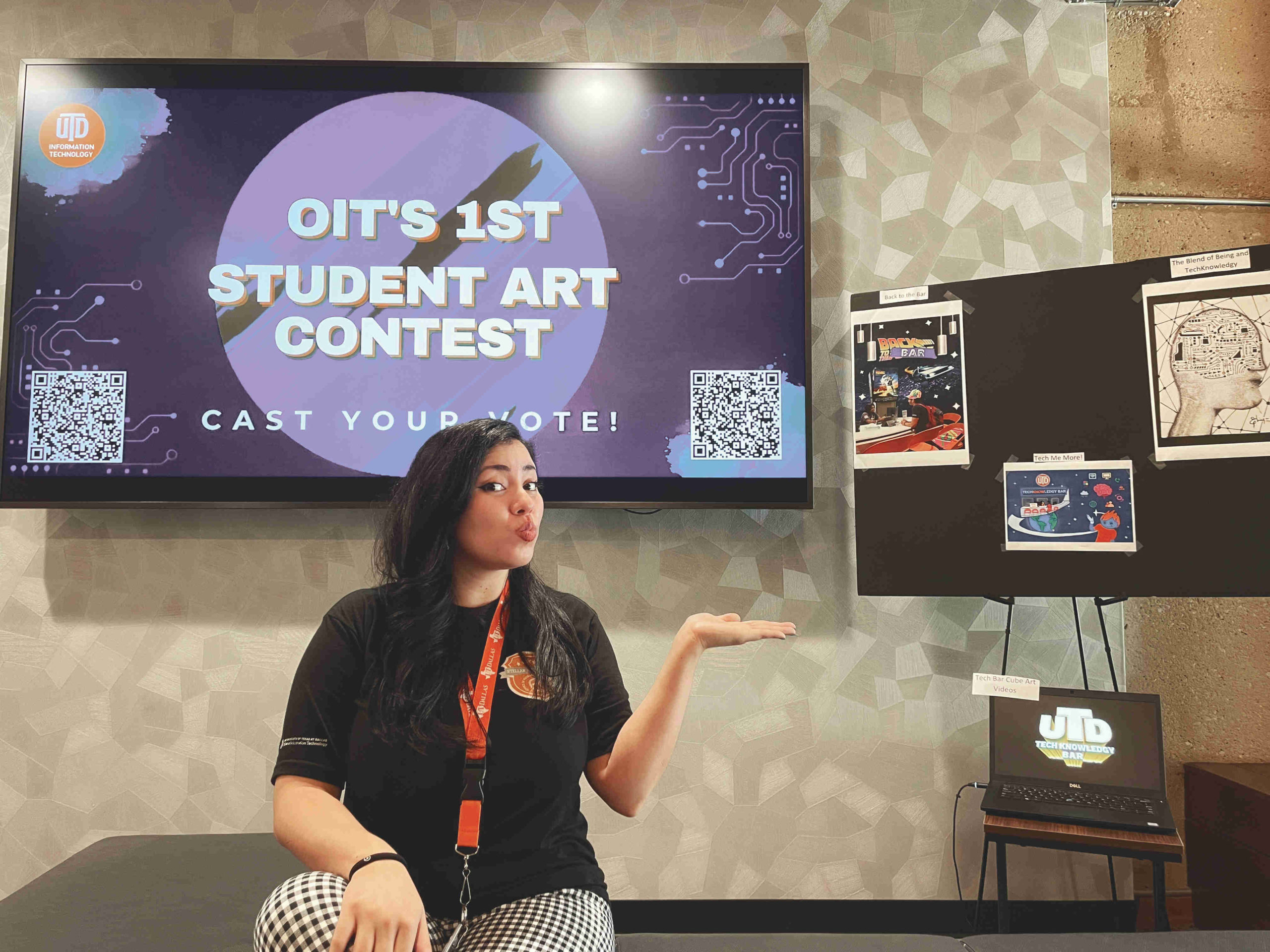 The TechKnowledgy Bar hosted its first official art contest this summer, uniting technology and artistic expression in the first of many outreach events.

UTD’s Tech Bar was first introduced as a free service ran by UTD students for Comets in Fall 2021. IT Support Specialist IV Amanda Pritchard said in the months since the Office of Information Technology (OIT) began this initiative, it’s aided students with freshmen laptop setup, software installation, and security check assistance while providing a thematic bar setting inside the Student Union. In the interest of welcoming more students to this free service, Psychology graduate Lauren Bernall, a current student assistant on the OIT event outreach, spearheaded the art contest in conjunction with Pritchard from July 1 to July 17.

“It’s an invisible barrier sometimes for people, just that little line that’s kind of drawn in the ground,” Bernall said. “Sometimes people walk by and look at the space, but are afraid to walk in. So having this art contest is giving a new audience access to the space and permission to go and to explore it. It’s breaking down that invisible barrier that we’ve seen.”

The hope, Bernall said, was that the contest would also bring more students together to defeat the stereotype that divides technology and art. In favor of interesting all categories of artistic talent for this contest, they decided to open this event to all UTD students.

“UTD is full of students from diverse backgrounds from different countries to different kinds of principles and subjects,” Bernall said. “So, we want to see what kind of masterpieces there are. Brilliant students can create using any medium of art, ranging from Photoshop, to paint, or using a little paint canvas if they wanted to. These submissions can be simple or highly complex.”

Students were able to come to the Tech Bar from July 18. to 20 to vote for their favorite among four art pieces, and the winner, who will be announced on Wednesday, will have their art piece framed on the west wall of the bar until the end of the summer. Pritchard urges that while creative expression will be a core feature of the Tech Bar and they’ll have more art contests in the future, they want to establish a rotation of several different facets of content beyond the art competition.

“Just like technology, [this] space is meant to constantly evolve and to grow with the needs and demands of campus,” Pritchard said. “We are planning on having that rotation of content there so that students can always see it as a proactive space…There’s a lot of traditions that we’re starting. This is a new space and this is one that I would like to see come back annually so that students can continually develop their skills and have opportunities to present and be invested in this space along with us.”