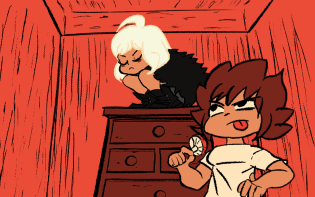 Many of us wish we had the power to go back and change things. “Seconds” by Bryan Lee O’Malley explores that natural urge to alter past regrets, with the twist that our protagonist uses the powers of a house spirit to go back and change those small regrets we all obsess over. There are greater consequences to getting a do-over, however, showing that facing the aftermath a of a bad decision might be the better way to move on from it.

“Seconds” follows a talented young chef named Katie, who runs a successful restaurant and is pursuing her dream of opening another one where she’s head owner. Despite things going well for her, as always, life happens. Progress on the new business starts to get delayed, her ex-boyfriend reappears, the fling she’s been having with another chef starts to go downhill and to top it all off one of her waitresses gets badly hurt due to said fling. If there were ever someone needing a do-over, Katie was it.

Now, here is where things get interesting. In the middle of night after the incident with the waitress, a mysterious girl appears to give her a chance for redemption. Yet, as we see Katie and the mysterious girl—who turns out to be a house spirit—start to develop a tumultuous back-and-forth relationship, we learn that there are rules to the magic where this “second chance” comes from, and Katie quickly gets in the habit of abusing it. By using the folklore of house spirits as the vessel for this time-altering magic, O’Malley creates a situation where we are made to see how our actions and decisions don’t just affect ourselves but also those around us in ways we might never be aware of. While her waitress was hurt, for example, that accident gave Katie the chance to get to know someone who had been desperately wanting to talk with her. That opportunity wouldn’t have come about without the mistake. Or that chef Katie’s romantically involved with: fixing her past mistakes would preclude her learning about his respect for her and desire to become friends and equals. None of this would have come to light because she was too obsessed with fixing past mistakes and wasn’t taking the time to slow down and focus on the good things around her.

O’Malley also creates a situation where the rules to the magic are beyond our comprehension, forcing the reader to just accept that this is an ancient thing that has always been around and not try to force logic into it. Katie’s unpredictable journey is all a metaphor for the phrase “God, grant me the serenity to accept the things I cannot change, the courage to change the things I can and the wisdom to know the difference.”

In terms of art style, if you didn’t recognize the name Bryan Lee O’Malley already, you might recognize his style from the “Scott Pilgrim” series. In “Seconds,” O’Malley’s art style is still the whimsical and cartoony style many fell in love with, but his use of panels and fourth-wall breaking is a bit more tame and intimate. As in “Scott Pilgrim,” O’Malley talks to the audience directly, but also to our main character, creating this rapport with Katie where readers can forget that it is him talking and not Katie’s subconscious or intrusive thoughts. This intimacy through fourth wall breaks is created by the way he chooses to organize his comic panels and text. For example, by having a lot of these fourth wall breaks with him in the margins and Katie within the panel, we see how there’s a continued back-and-forth between her as a character and him as the writer.

All in all, while regret is bound to happen, we can’t allow ourselves to get tunnel-vision and forget to live in the present. Along with that, we must accept that there are things we cannot change– the past being a definite example of what’s unchangeable. As satisfying as it can be in the moment to reminisce over lost possibilities, there is a grace to acceptance that we must learn to embrace.