'The Batman' provides a refreshing take on Wayne, more accurate to the comic hero 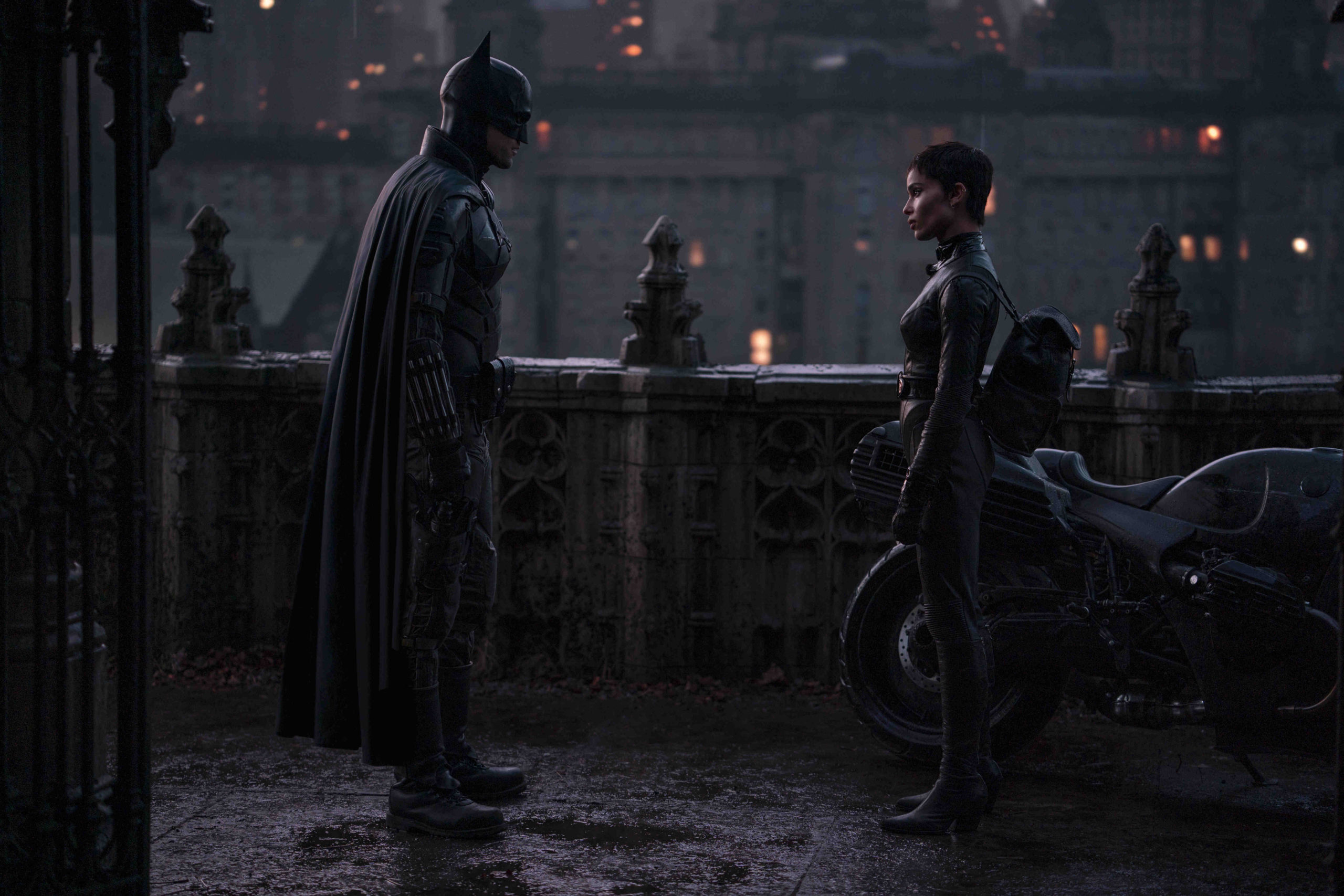 Batman and Catwoman discuss the issues with Gotham City. Pattinson and Kravitz perfectly display the complicated relationship between those connected by trauma. Photo courtesy of Warner Bros Pictures

While some Batman fans were left unsatisfied after viewing an angsty Robert Pattinson clad in a trenchcoat and greasy bangs, I left the theatre with the soundtrack, clang of armor, and roar of Gotham nightlife echoing in my ears. Despite some peoples’ distaste for Pattinson, I believe he gave one of the best performances in the long history of the caped crusader.

There have been many renditions of Gotham’s masked vigilante, but very few left me satisfied with the comic-to-screen adaptation. It is hard to take older versions seriously, and Ben Affleck was unlikable and pushed the “rich douchebag” troupe too far. Christian Bale, on the other hand, was the perfect combination of billionaire playboy and angsty orphan. Entering with a strong adoration for Christopher Nolan’s Batman movies and a lasting hatred for Affleck, I’ll admit I was initially unsure that Matt Reeves’ new adaptation would live up to my expectations.

Right from the get-go, it is clear that this film is a lot darker than the others. It takes strong aesthetic cues from film noir with its gloomy lighting, impeccable narration from Pattinson and rampant, realistic crimes. While this Batman lacks the charming, seductive persona that Bale had (and that Affleck attempted), his performance matches the film’s intense, dangerous atmosphere. Pattinson’s Bruce Wayne was awkward and a bit of a prick, and it was fantastic because it was so different from what we have seen from Batman before. Best of all, this rendition focuses on the mystery and deep web of crime in Gotham, finally letting Batman be the “world’s greatest detective” that the original comics intended. We see an intellectual side of the hero, unlike many action films that simply revolve around brute force.

So, while Bale played an immaculate Bruce Wayne, Pattinson is a better Batman. He was so expressive in everything he did, from scanning a crime scene for clues to his hand-to-hand combat with Selina Kyle (Zoë Kravitz). Some viewers saw that emotion as a weakness, but I thought Pattinson brought a new level of sensitivity and anger to Batman, at points making the viewer question if he was a hero or just a broken man with a questionable moral compass. This duality was refreshing: it made me see an iconic character in a completely different light, showing that our heroes should not be 100% idolized.

I already knew Robert Pattinson’s acting range went beyond “sparkling vampire”, but watching him act like a vengeful god, every action laced with bitterness, was goosebump-inducing. His glare was far different than his Edward Cullen smolder, showing the viewers he is straying far from the “heartthrob” roles that I feared he would be typecast in. Instead, getting to watch him portray Batman deftly solving a series of intricate clues was anxiety-inducing in the best way possible.

Pattinson and Paul Dano’s Riddler also had the best interactions between a hero and villain that I’ve seen in a long time. Better still, while Dano was completely unhinged and amazingly frightening to watch as the Riddler, the film also introduces our new Joker briefly and vaguely, which had me almost leaping out of my seat because the actor choice (spoiler alert) is amazing. I cannot fathom waiting a couple of years to see Pattinson’s Batman square off against the next Joker.

I urge you to watch this film to see where Pattinson falls in your Batman tier list. Before doing so, push away all previous notions of the actor if you only know him as a hot vampire. He brings a unique performance while sharing chemistry with a cast full of equally amazing stars. This is just the beginning for our new Caped Crusader, as Pattinson plays a Batman just beginning to test his wings in his second year of vigilante work, leaving plenty of room for his journey across the next few installments. This is one of the few superhero films that show clear character development, and I cannot wait to see more of Pattinson and how he develops not just the character of Batman, but of Bruce Wayne himself.