Sandro Galea’s treatise on medicine and how to fix it 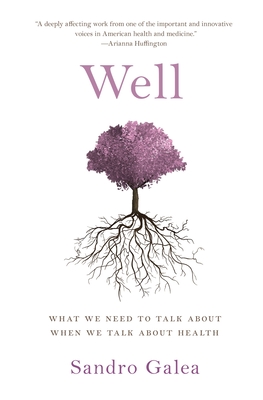 Maybe this book hit me so hard because I read it while violently ill, but I’d like to believe it’s more due to Sandro Galea’s sheer skill as a writer. Between a veritable horde of academic citations, clear explanations of a dizzyingly complex subject matters and an incredibly well-constructed argument for reforming the American healthcare system, “Well” is one of the most persuasive books I have ever read.

First things first, the author’s name alone is a big draw. Galea is one of the most cited authors in social sciences for a reason: he knows his stuff. Don’t let that STEM focus scare you away, though. “Well” stands out in this kind of nonfiction text for its persuasive use of narration and stories in advocate for healthcare reform, drawing on data and lived experiences alike to make his case.

And what a case it is! The thesis of this book is a complete restructuring of the way we define and approach medicine as a discipline. America tends to focus in on “sick-care” rather than “healthcare,” Galea argues, with reactive measures like cures research and medication to address symptoms rather than preventative actions that would prevent sickness from arising in the first place. Asthma is treatable, for example, but rates continue to skyrocket, including that of childhood mortality. “Well” asks a question I’ve never considered before: why aren’t the regulatory loopholes allowing pollution in residential areas and school zones considered part of this problem? If we widen our definition of healthcare and preventative medicine, we can address the environmental causes of asthma to bring down rates, rather than produce more and more inhalers.

“To be truly healthy, we must understand what produces health, follow where the data lead and then be clear-eyed about enacting the measures that address these forces,” Galea writes. “If we do this with the same vigor reserved for, say, taking antibiotics when we have an infection, there’s no limit on where society can go from here.”

He doesn’t stop at considering environmental pollutants either. Each chapter of “Well” is dedicated to different facets of this shift towards preventative medicine, including social bonds, economic inequality and political processes. There’s an in-depth discussion of LBJ’s wheeling and dealing to create Medicaid/Medicare, for instance—and there’s another green flag for quality in citing Robert Caro as the authoritative source on the former president—and what’s changed in the political landscape since then.

It’s important to note that “Well” was penned pre-COVID-19. It’s certainly aged well, with a prescient mention of vaccine hesitancy, although Galea understandably doesn’t spend too much time on it. Even his prophetic abilities are limited. Still, overall, the points he makes have aged incredibly well, and you don’t have to imagine Galea shouting in vindication: he is. Last fall saw the publication of his pandemic-focused sequel, “The Contagion Next Time.” This book’s critique of public health infrastructure makes good company with Bill Gates’ 2015 TED Talk on the world’s lack of pandemic preparedness

Galea does walk close to that cliff’s edge of covering too much. It can be tempting, writing something like this, to get carried away, and lose the central thesis in a “Book of Everything.” Miraculously, however, he pulls back from the pit, refocusing on tangible improvements to the American medical system. So bear with him through the discussions of philosophy and Auden’s poetry—it will not only come back to the point shortly, but be made relevant to the central point. Galea has a thesis, and he sticks to it in succinct and persuasive prose. Emphasis on “succinct.” I don’t know what magic he did to cram all this in 210 pages, but it kept me hooked throughout.

If ever there were a book to put on every medicine or politics-adjacent major’s reading list, this is it. When Galea manages to make statements like “Health is other people” and “We must love one another or die” between quantitative data and concrete proposals for improvement, I can’t help but recommend it to anyone looking for “Well”-ness in today’s world.