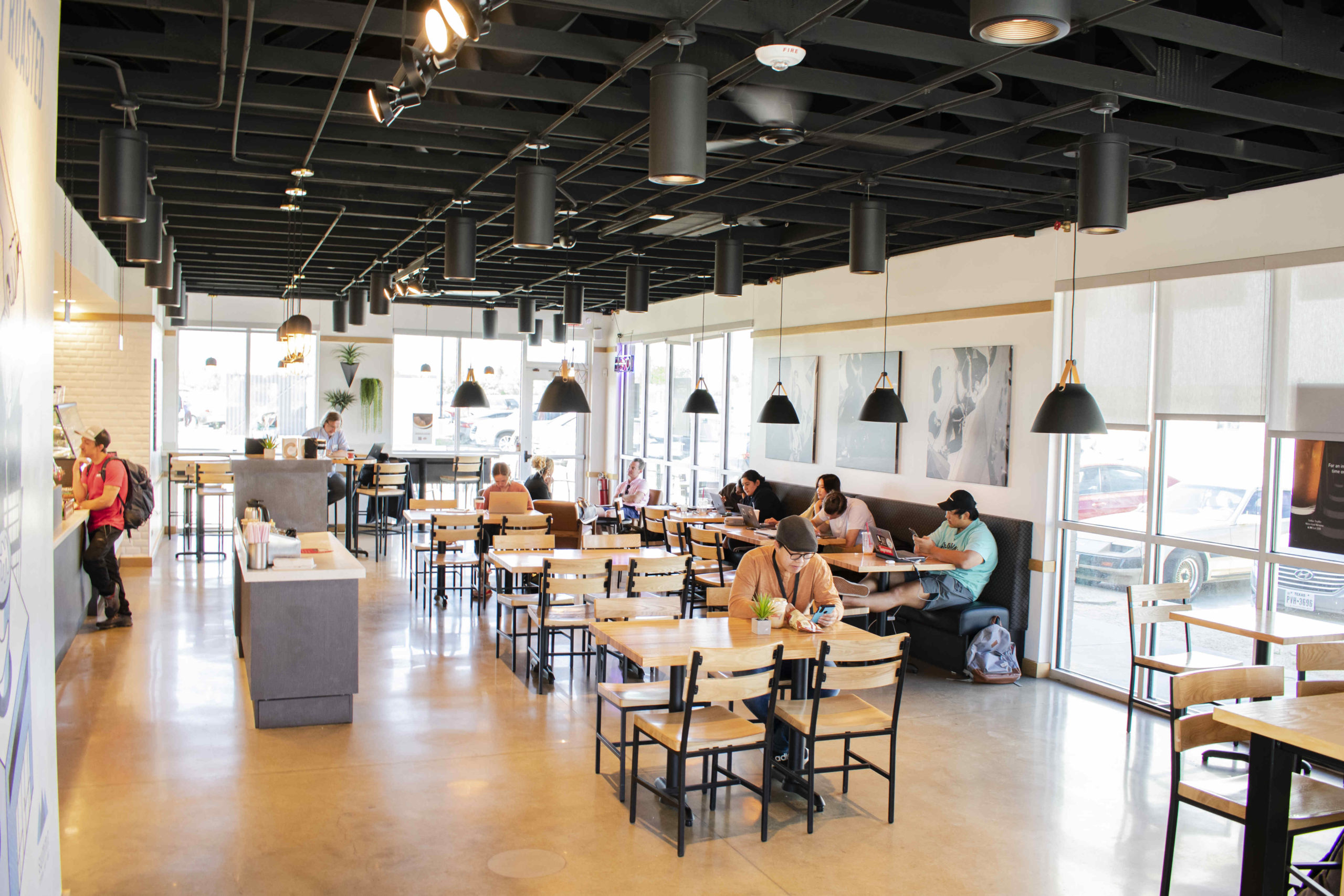 Since it is partnered with a climbing gym, beer, wine and a bouldering room are present alongside the coffee at Dunn Bros. Photo by Ben Nguyen | Managing Editor

Yet another northern coffee chain has transplanted itself into DFW in the last few years, but our particular local branch of Dunn Brothers Coffee arrived with some unique circumstances.

Just down the road from the Walmart on Coit Road, Dunn Brothers looks an awful lot like an upscale Starbucks at first glance. Take a few moments to take everything in, though, and the differences become clearer. A bouldering training room attached to the same building? Naan pizzas and Red Bull infusions? A beer and wine selection? Why is this Dunn Brothers the way that it is, and why does that make it better?

The Richardson franchise of Dunn Brothers opened in 2019 as part of the Summit Climbing complex across the street, under that facility’s ownership. It’s open from 7 a.m. to 9 p.m. and offers booze as a part of its dedication to the climbers from across the street. This features in the design of the coffee shop as well; the café takes up about half the size of the SU Starbucks and has a bouldering training room connected to it. Another part of the design arethe large windows that make up the majority of the outside-facing walls, which assistant general manager Jacob “Goose” Ostrander said was part of the intentional design, alongside the alcohol.

“[The owners] wanted the kind of space where people could come in, sit and work. It’s the same reason why there’s so many big windows that just kind of fit around the entire area, because it gives an open space… It gives you the room to have the privacy to work,” Goose said.

The café does feel open, and it has a great free internet speed of about 274.3 Mbps down and 38.4 Mbps up. But how does the coffee shape up? Well, a product primed for direct comparison is the Vanilla Iced Nirvana (a nitro vanilla cold brew that Dunn Brothers offers). It is not unlike Starbucks’ own Vanilla Sweet Cream Nitro Cold Brew. I originally thought that “nitro” was some marketing buzzword, but I was pleasantly surprised to be find that it meant that nitrogen was spun into the drink to give it a frothy texture—and it feels amazing. When you drink Dunn Brothers’ nitro cold brew, it starts with a bubbly froth before going smooth down the throat. It’s the best texture that I’ve had so far from a coffee, whereas the Starbucks offering might as well have been a differently named latte.

“But Ben, I don’t drink Starbucks because it tastes nice and feels good to drink; I drink it for the caffeine!”

Well, theoretical Starbucks fanboy, Dunn Brothers has them beat on that front, too. The “Infinite Black” brew they use not only has a great flavor (while its exact blend is a secret, it reminds me of a different Brazilian blend) but also packs quite the caffeine punch. As a caffeine addict myself, Starbucks’ cold brew lasted me until about 3 a.m., which is when I normally sleep anyway. Dunn Brothers’ involuntarily kept me awake until eight in the morning. At a similar price point (you can actually remove the nitrogen to shave off a dollar as well), Dunn Brothers has good-tasting caffeine. Why choose between caffeine and flavor when you can have both?

If you’re feeling upscale for lunch, the menu offerings are made to order and taste great, with the naan pizza being sized and priced for solo consumption. Approximately $10 will get anything food-related on the menu, but the coffee by itself is worth the visit— though I do recommend the chicken pesto pizza to lunchtime visitors.

While Dunn Brothers is an invasive species from the north, like Starbucks and Dutch Bros before it, its offerings of competitively-priced and flavorful coffee combined with an open working space make it a compelling alternative to the SU Starbucks. And, if you become a member of the Summit Climbing Gym across the way, you’ll get a 10% discount. So, Dunn Brothers provides a nice alternative way to get your latest fix— and a workout— near campus.