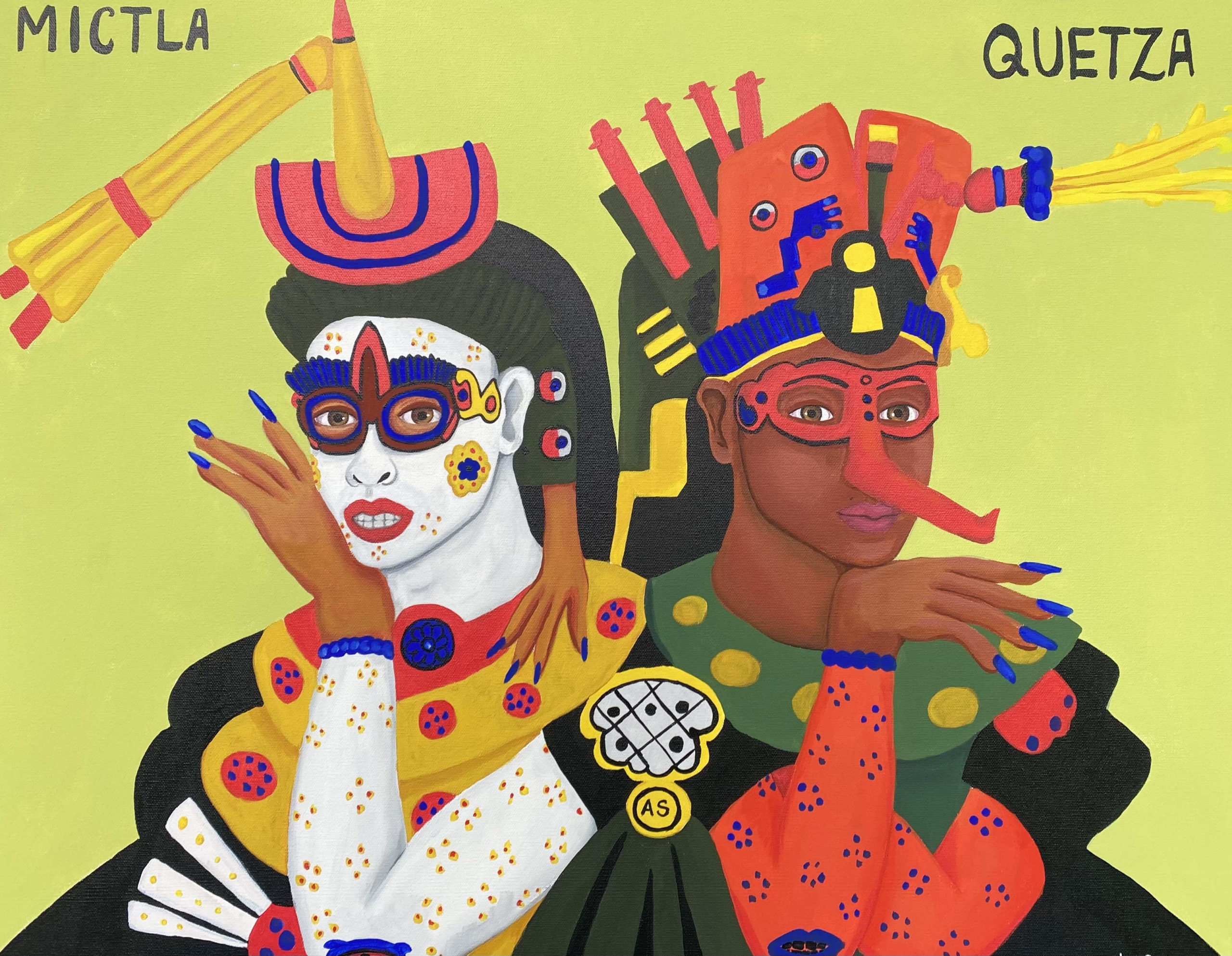 I had the opportunity to speak with Sebastian about “Serenade” and the many sources of inspiration for his work. Focusing on his career, this interview peeks into Sebastian’s curiosity and idiosyncratic character.

BB: Your exhibition at Cluley Projects, “Serenade,” opened about two weeks ago. The opening reception went great; there were a lot of people there really enjoying your art. How do you feel about it?

AS: I mean, it feels – it’s, it’s every word, you know? When I’m at my openings I’m like a spectator too. I kind of detach from my work and just let the paintings be the star. I like when people actually can connect to my work. So, it feels good. You know, it’s a reward for the long hours that it takes to paint.

BB: You can really see those long hours in your work, especially with those new oil paintings that you made for “Serenade,” like the one with the woman by the water. The title is “Moonlight,” I believe?

AS:Yeah, it’s called “Moonlight” or in Spanish it’s “Rumbos de Luna.” Sometimes I title my paintings in both languages, but it’s not necessarily a translation. It has the same meaning, but they’re different phrases. So Rumbos de Lunameans like, the path that the moonlight is showing you or following the moon, but it’ll sound weird in English. So that’s a way for me to try to engage the viewer with my work.

BB: And there’s so much to engage with. I also notice a romantic theme across your works in “Serenade.” Where did the romantic impulse come from and what were you inspired by when you started considering the idea of “Serenade”?

AS: My first thought about “Serenade” was, why not make a show that is going to be inspired by songs I have always liked? Music to me is like water. I’m not a musician, I don’t play any instruments, but I feel like I can connect to music. Music has always been part of my work. But more than that, I wanted the pieces to be like a piece of music for the people. To me, all those paintings in “Serenade,” including “Rumbos de Luna/Moonlight,” they were serenading to the spectators. Does that make sense? I could be literal and paint a Charro underneath a window serenading someone, but that’s not the way I do it.

BB: Your paintings are like, in the way that songs are, self-contained and melodic poems. You get the impression from the painting, and you walk away with something meaningful. Which reminds me of the work of Frida Kahlo, which your work references especially with its ex-voto iconography.

AS: I feel very flattered when my work is compared to hers, but I feel like the people see that connection because we were inspired by the same things. I love Catholic imagery, which she did, and I grew up in a very traditional Mexican family. We are both Cancers. I grew up looking at Diego Rivera’s art, and other Mexican artists, which she did too.

So, I feel like I grabbed the same ingredients, but I’m making a different recipe. Sometimes, I don’t mind being obvious about it. I have a piece that referenced “Two Fridas.” I don’t mind because it’s my story; it’s not like I’m copying her.

BB: What makes your paintings so unique is how you act out so many characters. What does this kind of performance mean to you and your pieces?

AS: I mean, I grew up involved in theatre. I used to do plays and costumes and stuff like that. It was always very fascinating that you get to play something else. Any artist that is painting people paints the person that they know the most. And I mean, I look at the mirror every morning.

If the character has a mole, like mine, that means part of me is there, but if you don’t see it, then it’s something else or another story. Painting helps me to battle depression and not think about things. I guess people see me in my paintings because what I’m going through at the moment jumps out.

BB: Your work is inspired by a wide range of things, from the theatre, to yourself, to Madonna. Do you look for inspiration in unlikely places or does it just come to you?

AS: Well, I like the outdoors a lot. Sometimes, I disconnect from everything, and I just go for a walk and listen to music. Sometimes I create playlists and then those songs start to become sketches. I mean, even fragrances – Calvin Klein One, Blue Jeans by Versace, Eternity by Calvin Klein. Smell triggers something in me. It really puts me in a mood and then that leads to music or a film or a book. Then the rest is in the canvases.

BB: If you were to give a scent for “Serenade,” what would you recommend?

AS: For “Serenade,” something with orange blossom and sage. Probably some patchouli but the main note would be orange blossom. I grew up in Monterrey, Mexico and orange trees are very common there and during the summer and autumn, the flower releases a scent that is very smooth. It’s not like the regular orange you’ll find in perfumes. It’s very soothing. So, it brings me, you know, good memories. We don’t have AC in Mexico so, when it’s hot all day, the nights are a little fresher, so people sit down outside just to refresh and you can smell the orange blossom.

BB: With your exhibition, you brought in an installation of your bedroom. Above the menagerie of items you’re inspired by is the line “Tu Amor le dio luz a mi vida,” Your love gave me my life. How does your relationship with love factor into your work?

AS:I’m a romantic at heart, but my work is not just about the love of a relationship. To me, it’s more of a love to yourself, a self-love. I think my work does deal with a lot of loneliness too, and a lot of sadness, but I like to embrace it. This relates to the serenade because Mexican music from the fifties, which is the music I reference for this show, is very melancholy and from the heart.

BB: Among a collage of music, pop-cultural and artistic references, your pieces often reference a wide range of religious subjects. The piece titled “Mictla and Quetza”from “Serenade”captures two Aztec deities in your unique style. What compelled you to want to take on these larger-than-life figures?

AS: I think the inspiration came from gender identity. When I was growing up, we went to Mexico City several times a year. As a kid, being there is just mind-blowing. I think it really got me to like value who we are in Mexican culture, where we came from and our ancestors.

But they don’t call them gods. They’re more like energy or entities? Quetzalcoatl and Mictlāntēcutli are like two forces. One of them, Mictla, is the force of destruction on the world. Quetza is this spiritual delight that came from the sky and the stars. So, it goes back to my aesthetic of good and evil, but the Aztecs didn’t see the evil as something bad because it was always a part of a natural process.

There are some carvings where Quetza and Mictla are together, and they are very androgynous. They don’t have a clear sexual identity and they are very fabulously dressed. They have these giant garments like they’re in a pageant. In the carvings, they’re also posing like they’re voguing. So, I’m like, this is a good opportunity to do something related to Vogue and Madonna. It’s a weird combination, but it makes sense to me. I have a lot more pieces that I’m developing on that because I feel like there’s a lot more to explore.

BB: And Madonna is in the middle of it, which is great.

AS: Right, the pagan and the religious. That’s who we are, that’s humans. We are like that. We have good thoughts; we have bad thoughts. I always like that duality. That to me is something that will never leave my work. Sometimes my sisters make fun of me because I like the Kardashians and I like the Real Housewives. They’re like, “How can you like this trash TV, but then at the same time be very spiritual?” But I like to have the other opposite. I need the other side too because I can’t always just be in limbo, you know?

You can check out Armando Sebastian’s solo exhibition, “Serenade,” at Cluley Projects on display through September 25, 2021.