Demonstrators turned out on Sept. 15 to protest rape-culture, promote consent 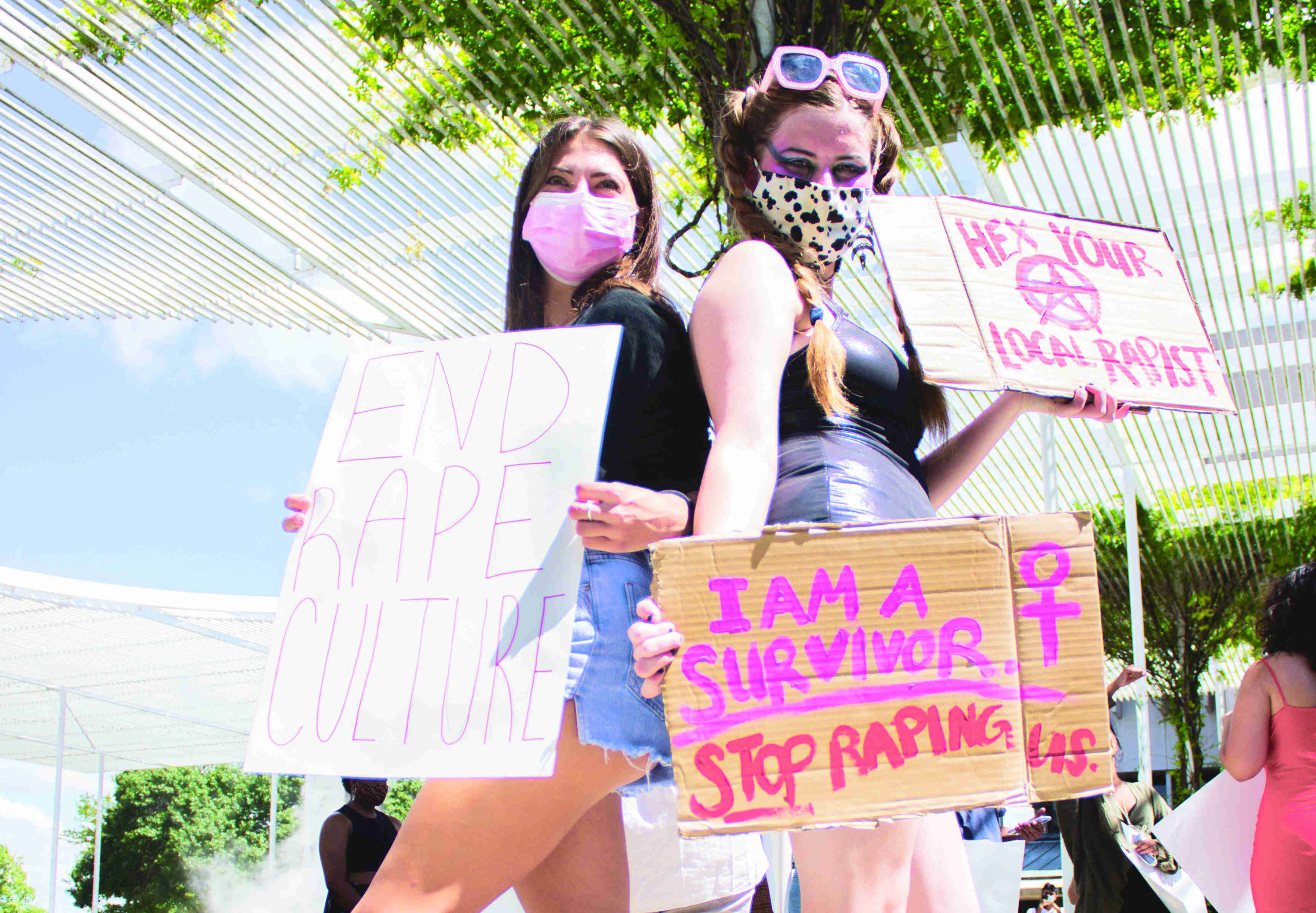 Groups of demonstrators wearing revealing clothing huddle together on-stage gripping posters that say “I’m a survivor, stop raping,” and “Boys will be boys held accountable for their actions.” After raising their posters in the air, they turn to face the crowd in front of the Plinth and chant, “Yes means yes, and no means no!” as Beyoncé’s “Who Run the World: Girls” blares through speakers behind them.

The demonstrators are here today for a Slut Walk: a protest against rape culture, particularly, the aspect that excuses sexual assault by any part of a victim’s appearance. It’s why many of the demonstrators are wearing short clothing: they seek to communicate that less clothing is a means of self-expression — not sexual consent.

The Slut Walk was organized by UTD student activist organization Deeds not Words. Biology junior and President of Deeds not Words CC Crocker said she was initially skeptical about calling the demonstration a Slut Walk, as the word “slut” is a derogatory term towards women. However, she later saw the demonstration’s name as a way to take back the term for victims of sexual assault who are “slut-shamed” after their assaults.

“We’re definitely trying to reclaim it,” Crocker said. “That’s what the whole national movement is trying to do: claim the word. And it’s not a negative thing: it’s body positivity and no one should be shaming you or victim-blaming you because of what you’re wearing.”

Among demonstrators present at the Slut Walk are victims of rape, Comets concerned with sexual assault incidents at UTD and individuals promoting body positivity. One such demonstrator is molecular biology junior Lizzie Schmitz who helped coordinate the demonstration.

Schmitz’s message is one that resonates with other demonstrators at the protest, such as psychology freshman Hannah Robert, who holds a sign reading “if your eye causes you to sin, gouge it out.” Robert says her poster is a way to showcase the hypocrisy in obscuring holy texts to ridicule women by what they wear rather than rapists for raping women.

“I believe that modesty for certain people can be a beautiful thing,” Robert said. “There’s nothing wrong with wanting to dress that way … but I think it oversteps the line when you impose yourself on other women and ridicule them for simply showing their own skin. Women are their own human beings; we have our own personalities and our own souls. That should be what we’re defined by: by our morals, by our rules for ourselves and what we live by personally and not exactly the clothes that we put on our backs.”

People other than women and sexual assault survivors also attend the Slut Walk to show their support for assault victims and protest the slut-shaming of women. Biomedical engineering sophomore Siddarth Jayakumar is one such supporter who said as a straight man, he felt a responsibility to be at the Walk.

“I know that a lot of who’s responsible for rape are straight men, even if it’s not all straight men,” Jayakumar said. “A lot of guys, they think when they see a woman dress a certain way, they’re inviting them over to talk to them, but women are allowed to dress however they want [without that implication]. It’s just a form of expression, you know? Just like everyday clothes are another form of expression. It’s not all about getting a guy or guys getting girls.”

Along with protesting hypocrisy in sexual assault cases and supporting victims of rape, attendees say the Slut Walk is a safe, judgment-free space for them to show skin. Accounting junior Chesley Turton and finance senior Jamesson Tankersley, who are the first men to show up to the protest, don crop tops — clothing they say helped them express themselves but would’ve felt uncomfortable wearing elsewhere.

“It’s a self-confidence thing and just wanting to support the ladies for doing [what they’re doing],” Tankersley said. “It seems kind of weird to be standing up there. I wouldn’t want to stand up there all day if I was just wearing this, so I’m impressed that they can do that.”

Overall, demonstrators such as Crocker, Schmitz, Robert, Jayakumar, Turton and Tankersley echo similar messages at the Slut Walk: that a person’s appearance is for themselves and should have no role in excusing sexual assault.

“I hope that males will realize that no matter what a woman is wearing, that cannot excuse their actions,” Crocker said. “Luckily, as society, we’re progressing to understand that a little bit better than we have in the past.”