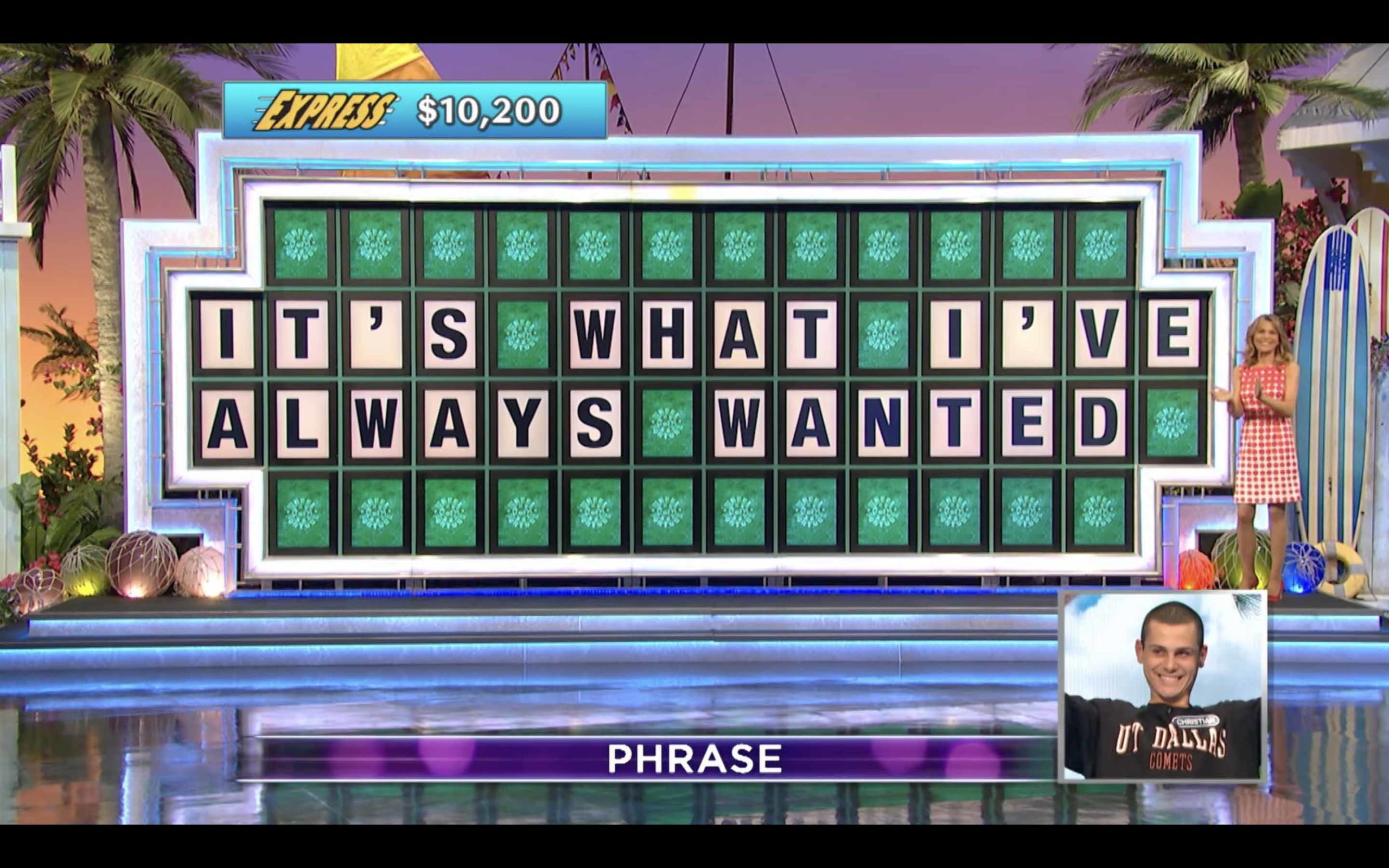 Nevarez won $6,000 and a vacation during an Express round for guessing the phrase “It’s what I’ve always wanted”.

While some students might spend their Wednesday night at home watching TV, Christian Nevarez – an interdisciplinary studies junior – spent Wednesday, April 7 in the studio of Wheel of Fortune to be broadcasted on TV.

Once the pandemic hit and classes shifted online, Nevarez moved to California, where – in addition to taking classes – he is now pursuing a dance career and working as an EMT. With those commitments to balance, Nevarez said he didn’t exactly plan on being on a game show.

“I had actually never really watched Wheel of Fortune ever in my entire life. I’m not really a game show person,” Nevarez said.

The thought came to him last September when a friend was visiting for her birthday.

“Me and my friend were getting ready to go out and get drinks,” Nevarez said. “I had already been drinking a little bit, and I was watching this game show, and I was like, ‘Oh my god, that would be so fun to be on a game show. How do I do this?’ So, I Googled it.”

Later that day, he submitted a minute-long video introduction; two weeks later, he attended an interview process through Zoom. It wasn’t until months later that he was notified he’d gotten onto the show and that his appearance would take place the following week.

On the day of shooting, the studio followed COVID-19 safety protocols, meaning there was no live studio audience. The staff was kind and the other contestants offered words of encouragement, Nevarez said.

In one round, Nevarez landed on the Express Wedge, where contestants can call out consonants and gain $1,000 per correct consonant. However, a missed consonant results in a Bankrupt, where the contestant loses all their money. By figuring out the phrase “It’s always what I’ve wanted,” Nevarez gained $6,000 and a trip to Mexico.

Although Nevarez said it was nerve-wracking to speak live on the show, he advanced far enough into the game to walk away with $17,000, which he will put to good use towards his career.

“I’m continuing to use that money to further be able to be more creative and not to work so much. Rent out here is expensive, so it’s nice to be able to have that cushion for a little while so I can focus more on my arts and my creative side,” Nevarez said. “And then of course finishing my degree. I’ve been in school off and on for almost six years now and I’m tired. I’m ready to be done so I can finally get my bachelor’s degree and move on with my life.”

After the show, Nevarez said he emerged with a newfound respect for people who can speak on national TV. That being said, he doesn’t foresee himself being on another game show any time soon.

“The universe tends to reward the crazy, outlandish decisions. Anything that’s ever happened to my life that’s been good or amazing or fantastic comes from a decision that was made on a whim, or was a risk,” Nevarez said. “It’s one of those once-in-a-lifetime things. I’m just glad I can check it off the bucket list: I did a game show.”

Written in the stars