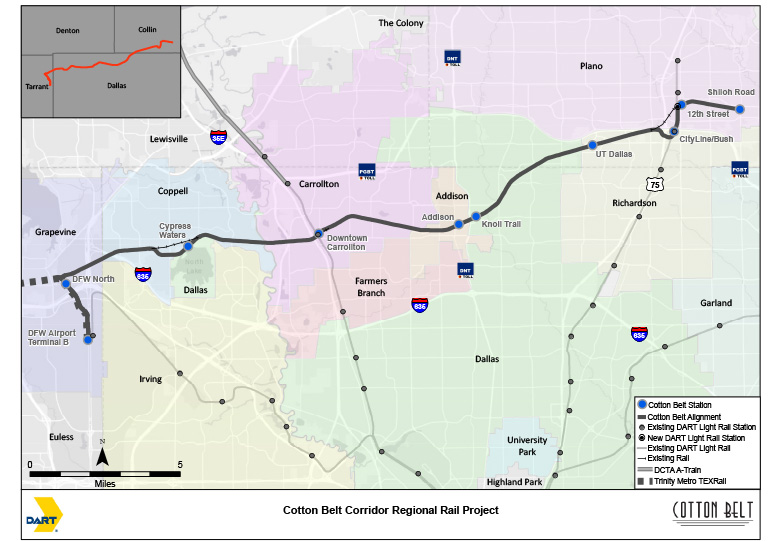 After years of running the same paths, DART has redesigned its public transit offerings to improve access throughout the Dallas-Fort Worth region. UTD students stand to benefit… if they can learn to use it.

Jan. 24 marked the official launch of DARTzoom, a system-wide redesign to reduce travel times and increase direct access to destinations across Dallas and its surrounding cities. According to the initiative’s website, this involves cutting some bus stops to maximize efficiency and ramping up service overall, with bus and rail lines projected to arrive every 15 to 20 minutes on high-frequency routes.

Calvin D. Jamison, vice president of Facilities and Economic Development, said that the increase in DART services near campus will benefit students.

“The DART expansion does not directly affect the 883 Comet Cruisers… however, we now have additional DART services in the areas adjacent to campus. For example, the new 232 route runs west/east along Frankford Rd, Synergy Park North Blvd and Renner Rd,” Jamison said in an emailed statement. “We have many students that live at apartment complexes near the Frankford/Coit intersection, and this new route passes immediately by these apartments.”

Moreover, those new services allow students using the 883 East bus route to transfer to the 232 and go west without passing through the UTD Transit Center at the front of the University. That should help to de-densify the 883 Comet Cruisers.

Comets for Better Transit president and history junior Daniel Yahalom is looking forward to the benefits these updates may hold for UTD students looking to get around town.

“The GoLink expansion was great, and a step in the right direction,” Yahalom said.

GoLink is a service that allows users to request rides, similar to Uber or Lyft, while within the newly-expanded GoLink service zone. While that area, even after expansion, still does not include UTD’s main campus, it begins nearby—just south of Campbell Road, about halfway to Arapaho—and is accessible in various areas around Dallas.

DART seems to be keeping well in touch with campus, even without direct GoLink connection. Jamison emphasized the collaborative relationship between UTD and the transit service.

“We work with DART to service the 883 routes as a 50/50 partnership. DART in turn is very flexible with our scheduling needs and route coverage to ensure that we are able to represent our campus in an appropriate way as UTD best understands the needs of the campus community,” Jamison said.

“We have seen enormous progress from zero buses in 2008 to more than 1.5 million riders pre-pandemic,” he said. “We are the fastest growing route in the DART system.”

Literature junior Jack Sierputowski, having learned his way around public transit from his hometown, Cleveland, has been using DART to get around town since his first semester on campus. From weekly grocery runs to Dallas daytrips, Sierputowski recommends Comets take advantage of public transit whenever available.

“Definitely get the school GoPass, because, you know, it’s free for us. Make sure you request it early, so you don’t get stranded at the airport,” Sierputowski said.

Past stranding mishaps aside, he pushed back against the stigma that is sometimes associated with using public transit- especially fears of robbery and physical harm.

“You’re not going to get mugged on DART trains, I promise. It’s probably the worst place to rob someone, considering it has fixed stops. By the time you get to the next one, they’re going to arrest you,” he said.

Students may obtain their free, unlimited-ride pass through the University. Once your request is processed, the GoPass mobile app can be used to explore the entire DART Service Area.

Expanding transit access is not set to end with the DARTzoom program, either. Jamison reported that UTD has finalized an agreement to complete a DART station and a “Park & Ride” area at Northside.

A Silver Line, connecting campus with the DFW airport, Addison, Carrollton and other destinations, is also planned to open for use by late 2024. DART is hosting Community Meetings for areas affected by the Silver Line project throughout its construction, both in-person and online; see the expansion’s page on DART’s website for upcoming events.

Despite the wait, students like Sierputowski are looking forward to the new rail system.

Still, a lack of publicity on the expansion and familiarity with how to use public transportation could prevent students from taking full advantage of the system.

“We appreciate better frequency and more lines, but the biggest obstacle DART has in UTD right now is that most students don’t know to use it,” Yahalom said. “They don’t know how to get their DART pass, how to plan a commute, when and where buses are available, et cetera… and the big DART launch, unfortunately, didn’t do much to address that.”

DART representatives did not respond to requests for comment.