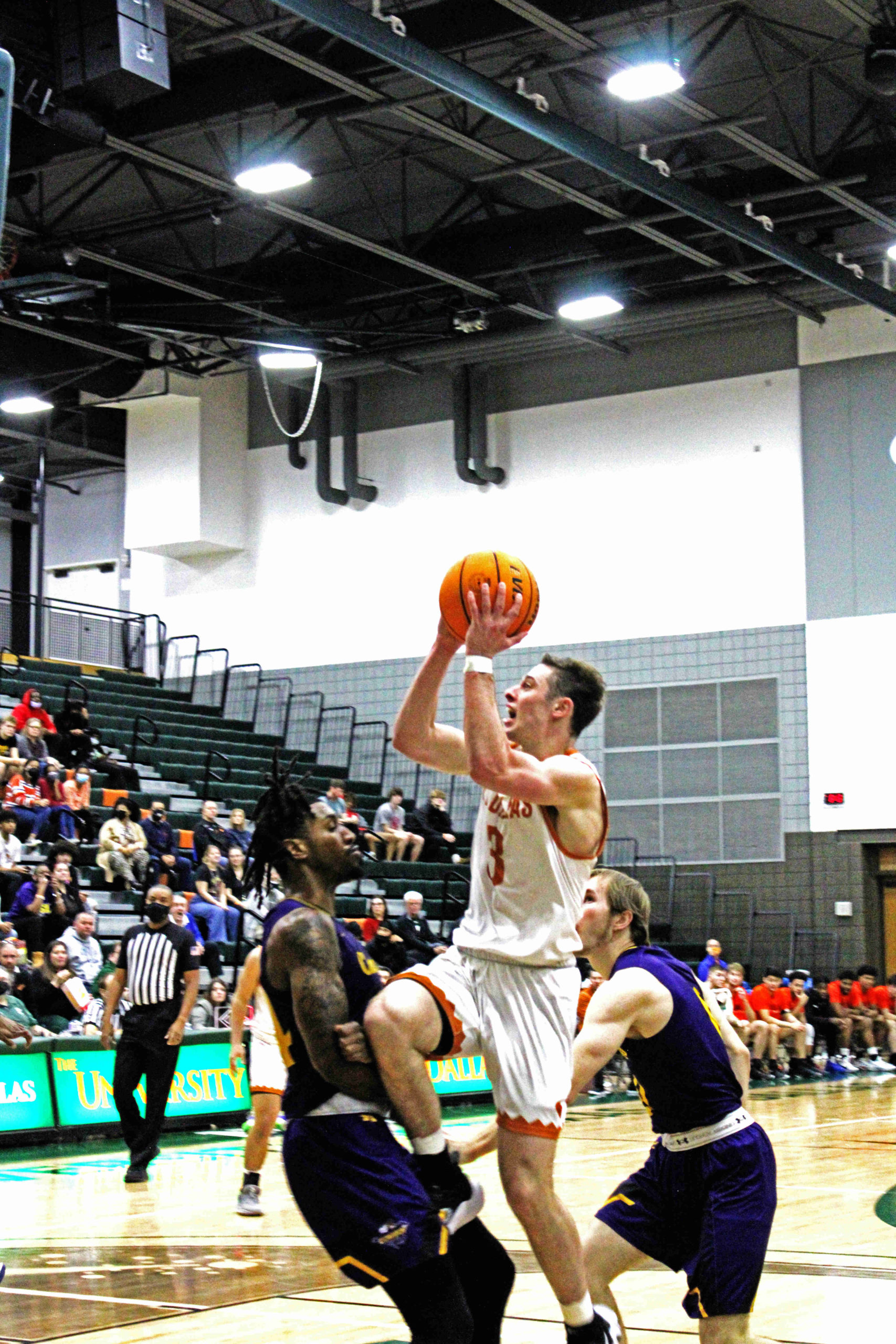 Freshman gaurd Luke Kiser goes for a layup in the Feb. 10 victory over Hardin-Simmons. Photo by Adamaris Dominguez | Mercury Staff

The Comets, fresh off a Monday win against Concordia, continued their home stand in the homecoming game on Thursday, Feb. 10, facing off against Hardin-Simmons squad.

The Cowboys came into the match having won four of their last five games and averaging 83 points per game in the process. Entering the game, the Comets were fourth in the ASC standings and 1.5 games behind the third-place Hardin-Simmons, but seeking to make up ground as they march forward into a tournament run.

Upon tipoff came a very back-and forth first half with turnovers occurring on both sides of the ball. Hardin-Simmons began to lose some ground with early foul trouble as the Comets were able to gain momentum with effective ball movement and many second chance points obtained within in the paint. The Comet’s defense shined, forcing 24 total turnovers in the game and allowing only 23 points in the first half. In addition, freshman forward Kameron Pruitt’s offensive play, with 12 points, five rebounds, and three steals in the first half sparked a seven-point lead going into the break.

The momentum from the Comet’s defense continued early on in the second half, with the team leading by as many as 12 points with 15 minutes to go in regulation. The Cowboys would not go down without a fight, however, scoring from outside the arc and forcing the Comets into difficult shots. Hardin-Simmons went on to score 14 unanswered points, including three consecutive threes from Chase Cobb, to take a 44-42 lead with 11 minutes left. Having four players in double figures enabled their late push as the Cowboys ultimately shot 51% as a team in the second half. But the real story of the game was the final five minutes, which were filled with intensity, competitiveness and physicality on both sides of the court.

After a late layup by forward Steven Quinn gave the Cowboys a 60-59 lead with 15 seconds to play, all eyes turned towards coach Terry Butterfield’s players and one final play call. In the end, it was a pair of free throws by Will Isaac which propelled the Comets to a dramatic 61-60 win. Isaac, having only played nine minutes, delivered two of the most important free throws of the season and helped the Comets improve to a 14-6 overall record and a 10-5 ASC division record. Postgame, Isaac stated that he was only focused on his last two free throws and not worried about anything else distracting him in that key moment.

“Honestly, it just came down to those last two free throws. I didn’t care about any of my play before that, I was just focusing on those two free throws, that’s it,” Isaac said.

In the end, the star player for the Comets remained Kameron Pruitt, scoring 24 points on 67% shooting and 10 rebounds. Pruitt praised the defense postgame, acknowledging the team’s impressive efforts were encouraging after “laying an egg on Sunday,” in which they allowed 85 points in a loss against Mary Hardin-Baylor.

“I think, bottom line, our defense was crazy impressive tonight. We kind of laid an egg on Sunday, but then we came back Monday, and then we came back today even harder,” Pruitt said. “So if we can keep this later stride in our season, I think we can go far in conference tournament.”

Coach Terry Butterfield expressed his relief following this big win, similarly attributing the victory to their stellar defense holding a potent Hardin-Simmons offense to only 60 points. Coach Butterfield also expressed his pride for late-game hero Isaac, stating his free throws as the difference between losing and going to overtime.

“I feel, just, excited for Will Isaac, who hit those two critical free throws. I mean, if you don’t hit those, we’re either going home a loser or we’re going to overtime, and that’s a lot of pressure,” Butterfield said. “I’m excited for our team, that we’re continuing to get better, and this is the time where you have to get better, because you know we’re all building towards the conference tournament.”

Late-season wins and handling close games, Butterfield argues, is what will help the Comets gain confidence in each other and their approach as they move forward with their tournament push. Approaching the last few games of the season, the coach and the team hope to utilize this game as a confidence booster.

“When your guys win a game like that, I think it should give them a lot of confidence in what we’re doing, in how we’re doing it, and confidence in each other,” Butterfield said. “It was really a team effort…you’ve got to be playing your best basketball at the end of the season…and I’m hoping that we’re nudging towards getting better and guys are seeing what could be as we go forward.”

UTD Rooms returns for student use