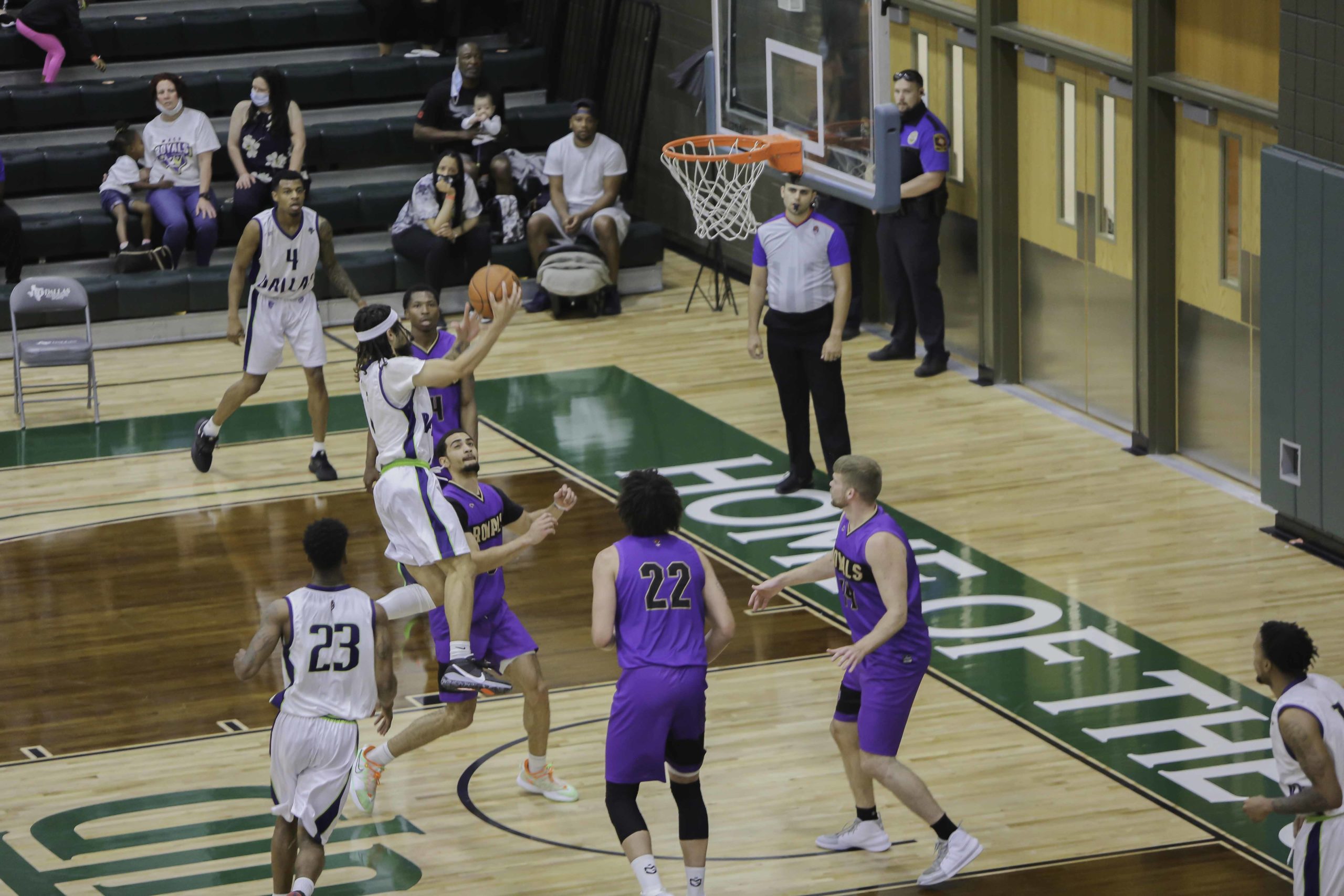 The Dallas Skyline, a minor professional basketball team, is calling the UTD Activity Center and University Housing home for its 2021 season.

The Skyline is part of the 35-team The Basketball League (TBL), which Team Market Owner Prescott Mack said is considered to be the third level of professional basketball in the US. Mack said that the TBL is considered a showcase league – ideally, players will move on to play at a higher level, either in the US or abroad.

“If you compare to UTD, we’re like NCAA DIII,” Mack said. “So, we’re still a really high level of basketball, just not as high as a Division II or Division I.”

The Skyline opened the season on April 9 to a crowd of about 150. In addition to the players and staff – all of whom get tested weekly and are required to wear masks – the team brought in cheerleaders, outside food vendors and two youth basketball teams. Mack said that he doesn’t anticipate selling more than 500 tickets per game, which meets the AC’s current 25% capacity limit.

“It doesn’t really affect us that much because we can still social distance and operate the way we need to operate, like sell enough tickets to complete our budget,” Mack said.

The team started competing during the 2020 season, using the Loos Fieldhouse in Addison as their home court. Mack said that from the beginning, it’s been a goal of his to have the team play at UTD. Ideally, he’d like for the Skyline to play at UTD for at least three seasons, before eventually getting into their own gym space.

“I knew the facility at UTD was really good,” he said. “I knew that the campus was really nice, and it always looks better to play at a college campus or any type of arena.”

Director of Athletics Bill Petitt said that their agreement with the Skyline allows the team to use the AC for two practices each week as well as 12 home games through the second week of June, but that there haven’t yet been any discussions of use beyond this season.

“We just have to see how this season goes and see if it would be something that we would be interested in doing,” Petitt said. “I think about all the freshmen orientations and the camps that our teams have in the summer normally, so I don’t know if that would fit into the schedule or not.”

As the Skyline goes into its second season, they’re still getting established in North Dallas; Mack holds office space in Richardson, and he wants the team to be active in community outreach and partnerships with local businesses.

In addition to the team’s use of the Activity Center for practices and home games, Mack said that Skyline players who live outside of Dallas will live on campus for the duration of the season.

Pam McElrath, associate director of Residential Camps and Conference Services, said that the opportunity to house professional athletes on campus is unique: typically, she works with camps, conferences and corporate interns who need summer housing. Citing privacy reasons, McElrath declined to say exactly where the players are staying but said that student residents remain the priority.

“We do have our guests in the same area as our students, but we have a lot of parameters we look at – is this somebody that could normally be in or close to our student population?” she said. “We were able to get them in based on the number of bed spaces that we have available, [but] our students obviously come first.”

Petitt said that it’s not unusual for external groups to use the athletic facilities. In the past, the university has hosted summer camps for the Dallas Mavericks and NCAA team practices around the conference tournament time. This is the first time that UTD is hosting professional games since former women’s basketball team the Dallas Fury played at UTD in 2004.

“It’ll be a chance to kind of expose the campus to this group of people,” Petitt said. “I’m not sure what the attendance figures will be like for them, but we feel pretty proud of the facility and feel like it’s another way to market UT Dallas.”