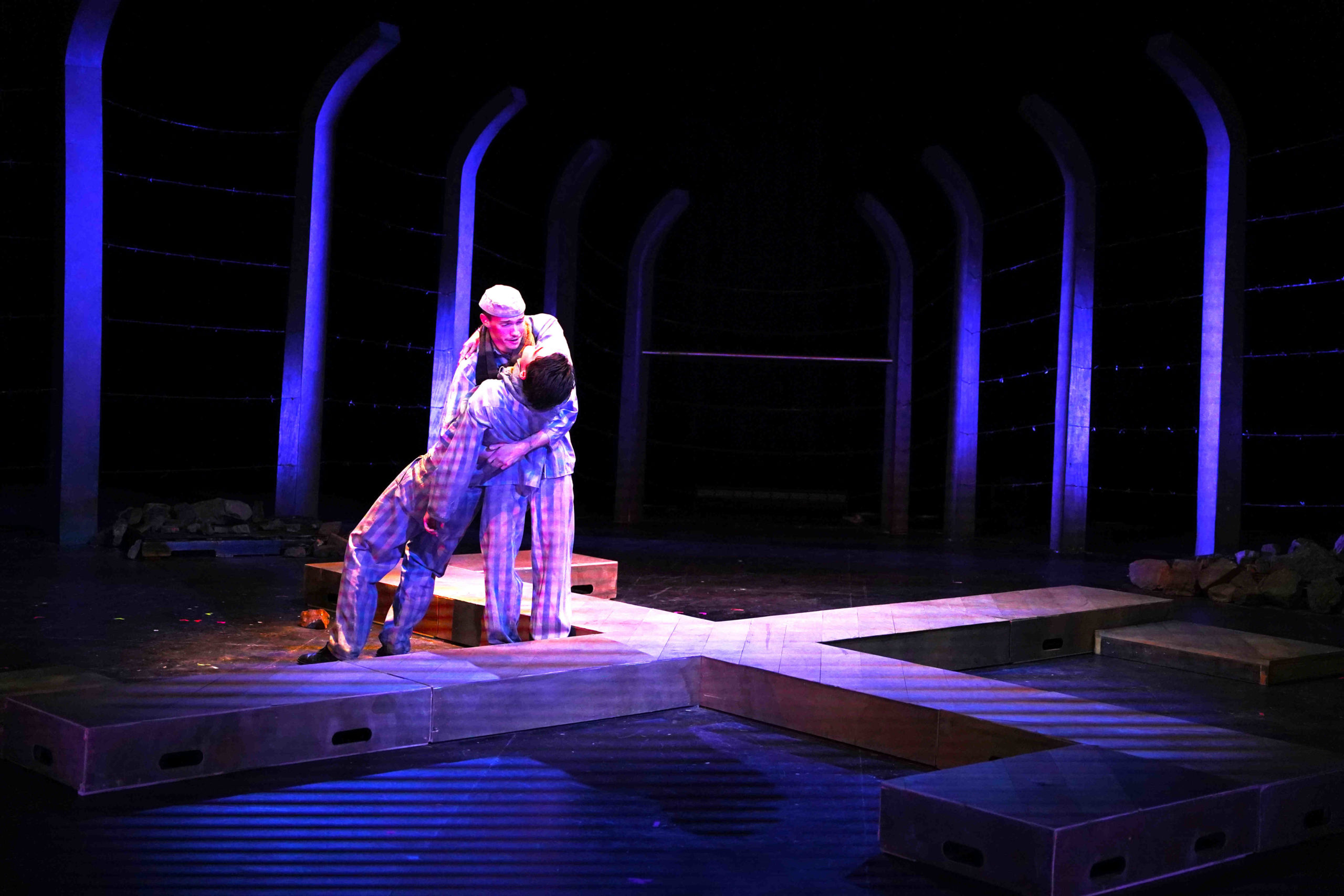 A series of brilliant cast performances from Mitchell Horn, Cal Thompson, Curtis Gerstner, Fahad Ahmed and others brings Treviño’s vision for the play to life on stage. "Bent" will run 8 p.m. shows on campus through April 30. Photo by Tatwik Bodepudi | Mercury Staff

With Holocaust Remembrance Day coming up on April 27, the UTD Theater’s spring play sheds light on an often-overlooked part of the horrors of Hitler’s regime: the persecution and murder of gay men.

History is not kind, here, and neither is director Chris Treviño’s staging. The show’s listed content warnings—including but not limited to assault, nudity and suicide—are accurate; proceed with caution. Cal Thompson, a visual and performing arts senior who plays the character Uncle Freddy, still found positivity in the show’s overarching positive message and representation, however.

“It’s a very heavy piece. It deals with a lot of very intense subject matter. As a queer person, having to deal with that and being in an environment where some people are hearing about it for the very first time can be very difficult,” he said. “But it is also a very gratifying play. Most of the characters in it—except for the Nazis—are queer.”

Playwright Martin Sherman’s “Bent” is set in late 1930s Germany, touching on Berlin’s underground LGBTQ+ scene and subsequent repression during World War II. The play opens just after a period known as the Night of the Long Knives, during which Hitler ordered the murder of critics and political opponents in order to consolidate the Nazi Party’s power. Protagonist Max is nursing a hangover with his lover Rudy and a guest from the night before when Nazi Stormtroopers force their way into the apartment, looking for their guest, who turns out to be a former Sturmabteilung trooper on the run. While Max and Rudy escape, Wulf (played by philosophy junior Daniel Underwood), is not so lucky. The pair swiftly go into hiding, but they are ultimately unable to leave Germany.

One of the highlights of this production is its deft tonal shift between comedic character interactions and the grim reality of their situation. Max and Rudy’s morning banter is just short of necessitating a laugh track, and watching Wulf realize Max is not the wealthy ticket out of Germany he’d been drunkenly promised the night before is excellent…until it ends with spilled blood. The switch that flips when a Stormtrooper opens the door instead of the couples’ expected nagging landlord is palpable. That wasn’t the first time I was lulled into a false sense of security by lighter scenes, either; by the end of the show, jokes just made me more nervous for the other shoe to drop. Still, the levity provided a powerful contrast to the show’s darker themes.

“Martin Sherman… hooks you in with the romantic comedy at the beginning, and then slaps you in the face with the end of that,” Underwood said. “From there, you’ve already grown attached to Rudy and Max and their dynamic and you have to witness everything that happens to them as the people in their life make their choices around them…it’s just a whole deal.”

Gay men during the Holocaust isn’t an easy subject to cover. Moreover, this play was one of the first to do so, originally opening in 1979, so it’s of historical note itself. Some of the revolutionary nature of debuting at a time when homosexuality in the U.S. itself wasn’t yet decriminalized—let alone accepted—is lost to time, but the context remains all-too-relevant. Director Chris Trevino worked with the cast to fully research and understand the show’s historical background before performing.

“We did a couple weeks of table work on the show, we watched ‘Paragraph 175,’” a documentary interviewing gay Holocaust survivors, Trevino said. “My assistant director, Hayden Lopez, did a compendium, a lot of research… so we’re saying it the right way and we know who we’re talking about” Trevino said.

Trevino, Thompson, Underwood, and other cast members all commented on the enduring relevance of the play. Murder rates of transgender BIPOC in particular are “alarming,” Trevino said, and anti-gay legislation such as Florida’s “Don’t Say Gay” law is a persistent problem.

“I’ve heard a lot of people talk about how heavily timely it is because of what we’re dealing with,” Thompson said. “And they seem surprised by it, but for a lot of queer people, this has always been the reality…It’s very real, and it’s gratifying to have other people finally take it seriously.”

Through its main character, Max, “Bent” engages a fascinating discussion of masculinity and gender norms, as well. ATEC sophomore Mitchell Horn’s portrayal of Max’s inner conflict throughout the show is riveting, especially when placed in contrast to biology senior Fahad Ahmed’s compelling choice of a Rudy that is more comfortable with feeling and femininity. Both are foiled by Horst, a fellow prisoner in Dachau, played brilliantly by finance junior Curtis Gerstner.

“Playing Max has been one of the best experiences I have ever had,” Horn said. “Not only is this play written beautifully, but the time I have spent with the cast and crew has been more than I could have asked for. This is a story that needs to be told.”

“Bent” will be running for a second weekend on April 28, 29 and 30, with shows starting at 8 p.m. in the University Theatre. Tickets are $15. The Thursday, April 28 performance will feature a post-show discussion on “Equity, Diversity and Inclusion in the Arts” available in-person and on Youtube. There will be a teach-in on LGBTQ+ history on Microsoft Teams at noon Friday, April 29, as well.

“This show is incredibly important. I hope everyone can come see it,” Underwood said. “From the bottom of my heart, to everyone that comes to see the show: you will enjoy it.”