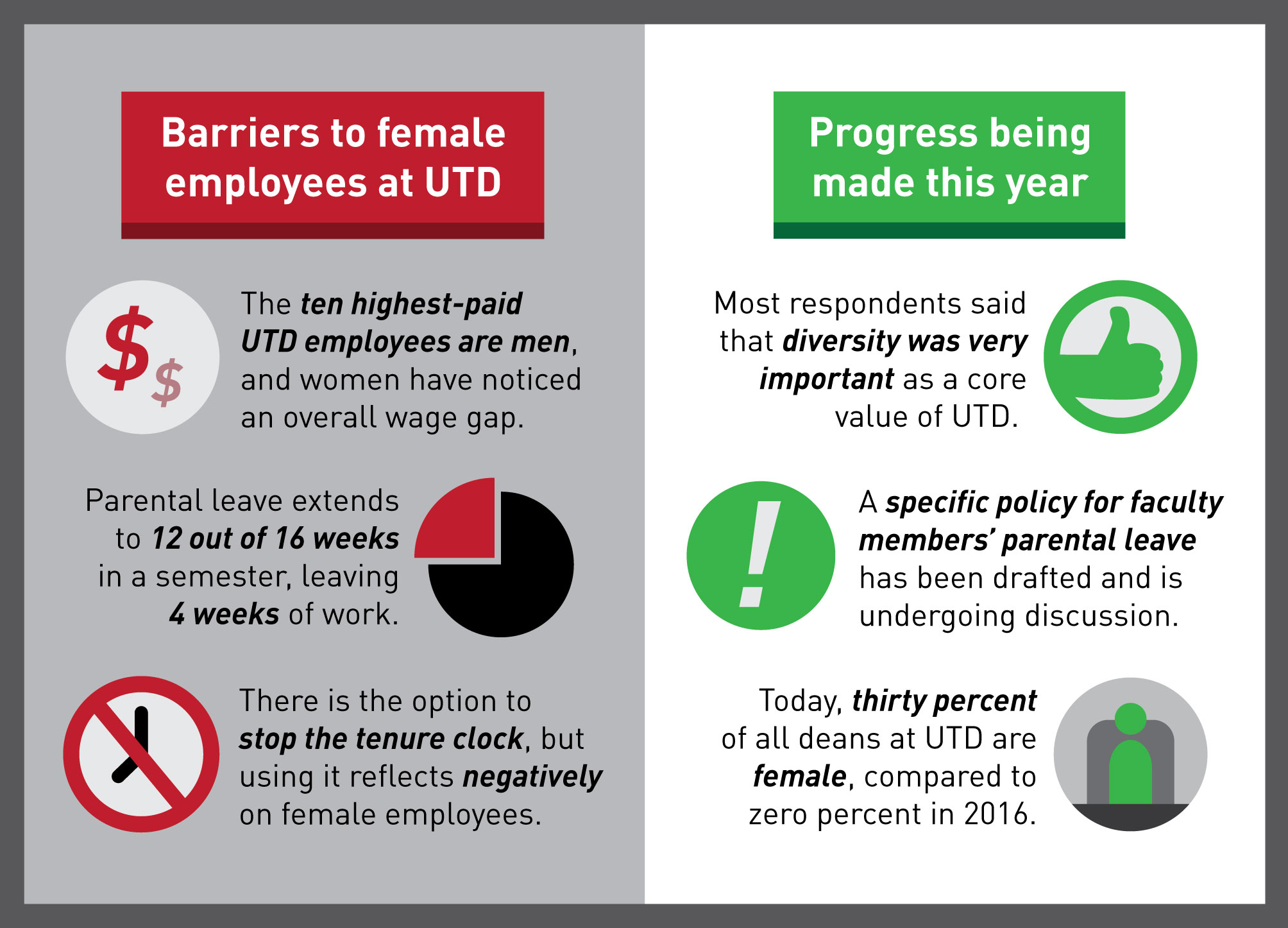 A climate survey of UTD faculty sheds light on parental leave and gender parity regarding women in the workplace.

In 2016, a survey sent out to all of the university’s faculty and staff addressed diversity in gender, ethnicity and other topics. Of UTD employees, about 27 percent responded to the survey. According to the report, there were major concerns about parental leave and diversity in the faculty ranks. Survey respondents said the parental leave policy is poorly designed; others said there are far too few women in administrative positions of power.

Public and Nonprofit Management Associate Professor Meghna Sabharwal researches the glass ceiling: an invisible barrier preventing female employees from reaching positions of power. She said a 2016 Diversity and Equity Committee climate survey of women — both staff and faculty — on campus clearly revealed that gender inequity within UTD is not a myth.

Universities sometimes have an option for tenure-track professors who are new parents to “stop the tenure clock,” or essentially hit “pause” on their tenure. However, research by the Institute for the Study of Labor shows that male faculty, rather than new mothers, are the actual beneficiaries of the policy. Sabharwal said she was advised by a female colleague to not stop her tenure clock; other female faculty recommended not having children during tenure because it’s just too difficult.

“I was told that I will be judged more in a negative light because now they would say, ‘She had extra years, she probably should’ve published.’ The standards will be changed,” Sabharwal said.

Sociology professor Sheryl Skaggs, who researches gender in the workplace, said UTD needs an improved parental leave policy because a lot of scenarios are handled on a case-by-case basis.

Although there is a parental leave policy providing 12 weeks of leave, the semester is 16 weeks long; this situation leaves parents, usually women, with four weeks of work in a semester. One survey respondent said the maternal leave policy does not work for faculty, and the dean or department head can either work with faculty or make it very difficult to take leave.

“I was actually told by HR that I could not take 16 (which would be a semester and make sense), even though I had the sick time saved up,” the respondent on the survey said. “Here, we need to beg with our administrators to find work-arounds and piece something together. It does not put women in a place of strength. I do not know one woman at this university who would say that our policy works — at all.”

“Where the questions have come in is when they’re teaching in the classroom, which is usually a 15-week teaching assignment, so that makes it harder for them to return to the classroom,” Burnett said. “So we have really tried very hard to work with that department and that individual, so we can maybe return them on an alternate assignment to let them finish out and not have any other resources of opportunities.”

Texas legislation determines UTD’s parental leave policy just like the other schools in the UT System. Director of Employee Benefits Marita Yancey said any deviation from the UT Systems policy is only allowable through law because it is a university funded by Texas and must follow state regulations.

The Committee for the Support of Diversity and Equity has drafted a specific policy within the last year for faculty members’ parental leave. Sabharwal said the committee is now sharing the policy with deans and hopes to take it to the president.

“Even though we don’t have that policy in place right now, we definitely try to understand the situation and work with the department and the employee,” Burnett said. “Our goals are to partner with all these departments and offer the best benefits we can to our employees.”

Another concern raised by survey respondents was diversity in faculty ranks. Almost 90 percent of respondents in all demographic categories said that diversity was important to them personally and that it was important to them that UTD hold diversity as one of its core values; 3 percent said diversity is not at all important. According to the climate survey, respondents reported significant structural and institutional barriers that interfere with the successful recruitment, promotion and fair pay of women and racial and ethnic minority employees.

Sabharwal said UTD is doing a much better job than when she began in 2009, however, with more women in leadership roles, more female program heads and greater representation for women in faculty ranks. Her research points to three key factors that alleviate the glass cliff and encourage women to stay: greater involvement in policy-making, a feeling of empowerment and an assurance of organizational justice and equity.

Skaggs said a notion that is often misleading is that just putting women in higher-level positions or leadership positions will create greater opportunities for women across the board; for real change to happen, it is necessary to hold the university to a higher standard.

“You can’t just necessarily have diversity training or things like that,” Skaggs said. “It’s really how people at higher levels are held responsible for creating an overall culture that doesn’t tolerate discrimination and allows opportunities across the board regardless of class, gender and ethnicity. We need to be teaching how to identify ways that we are potentially biased or hiring people exactly like ourselves.”

Another staff member, who identified himself as neither a female nor a minority, said that diversity must be a priority.

Some survey respondents, however, said they disagreed with certain efforts to promote diversity on campus.

“I’ll tell you that seeing special clubs, events and holidays for every group except white heterosexuals doesn’t make me feel welcomed as part of the community,” said an anonymous staff member. “Why should there be special groups at all? Why can’t we just go to class and do our work? Why should the university spend money and time on events, activities or groups at all? Meanwhile tuition is increasing every year.”

Another faculty person called the survey “politically correct pandering that reflects patronizing social engineering,” and 7.4 percent of respondents said UTD places too much emphasis on achieving diversity. However, nearly half of survey respondents said that building a diverse and inclusive campus community should be a key goal of UTD.

Sabharwal said, ultimately, both men and women need to be involved in the conversation. Women and men are a part of UTD’s faculty and staff, so any disparity affects both parties.

“Women are not the problem,” Sabharwal said. “Women are the solution.” 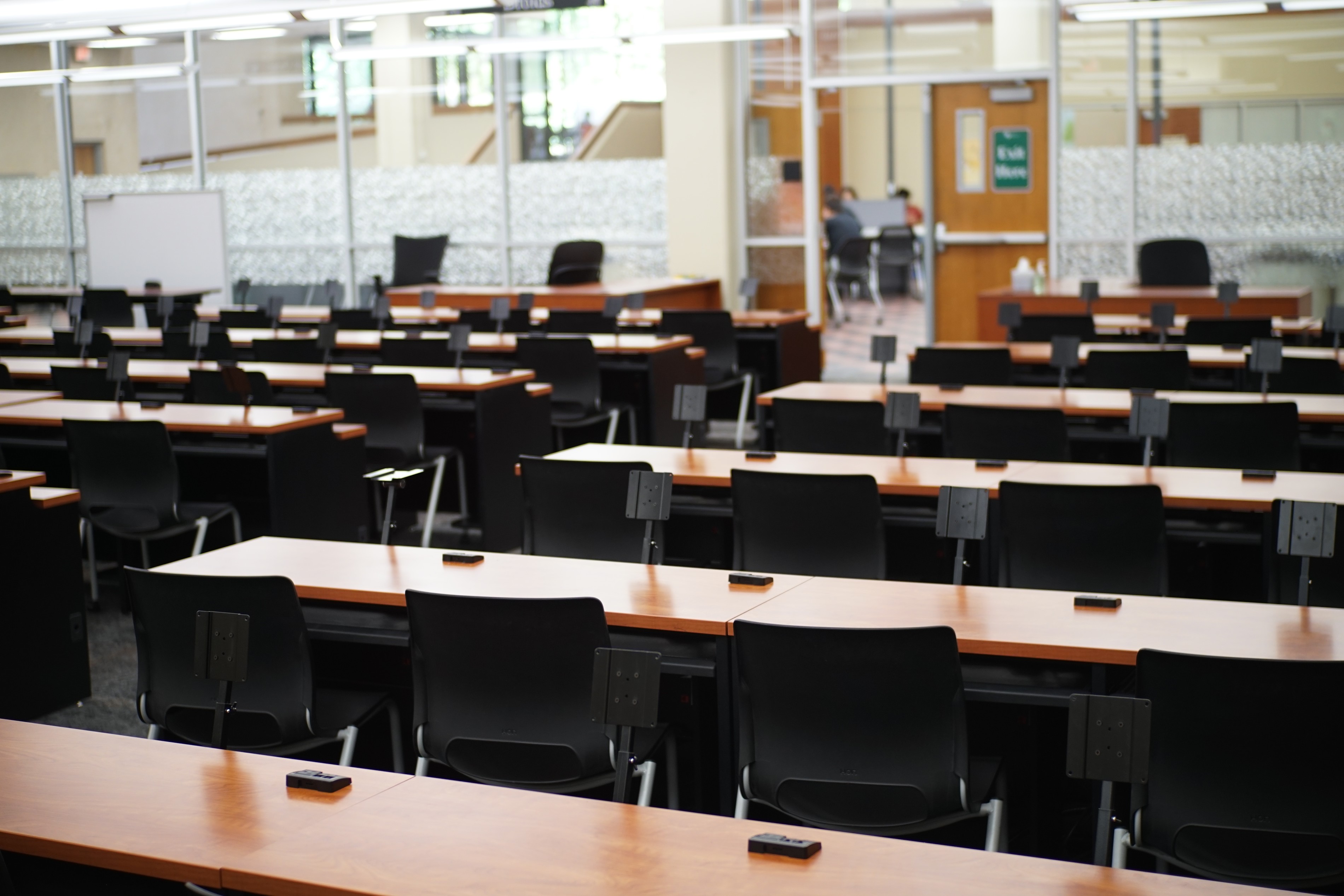