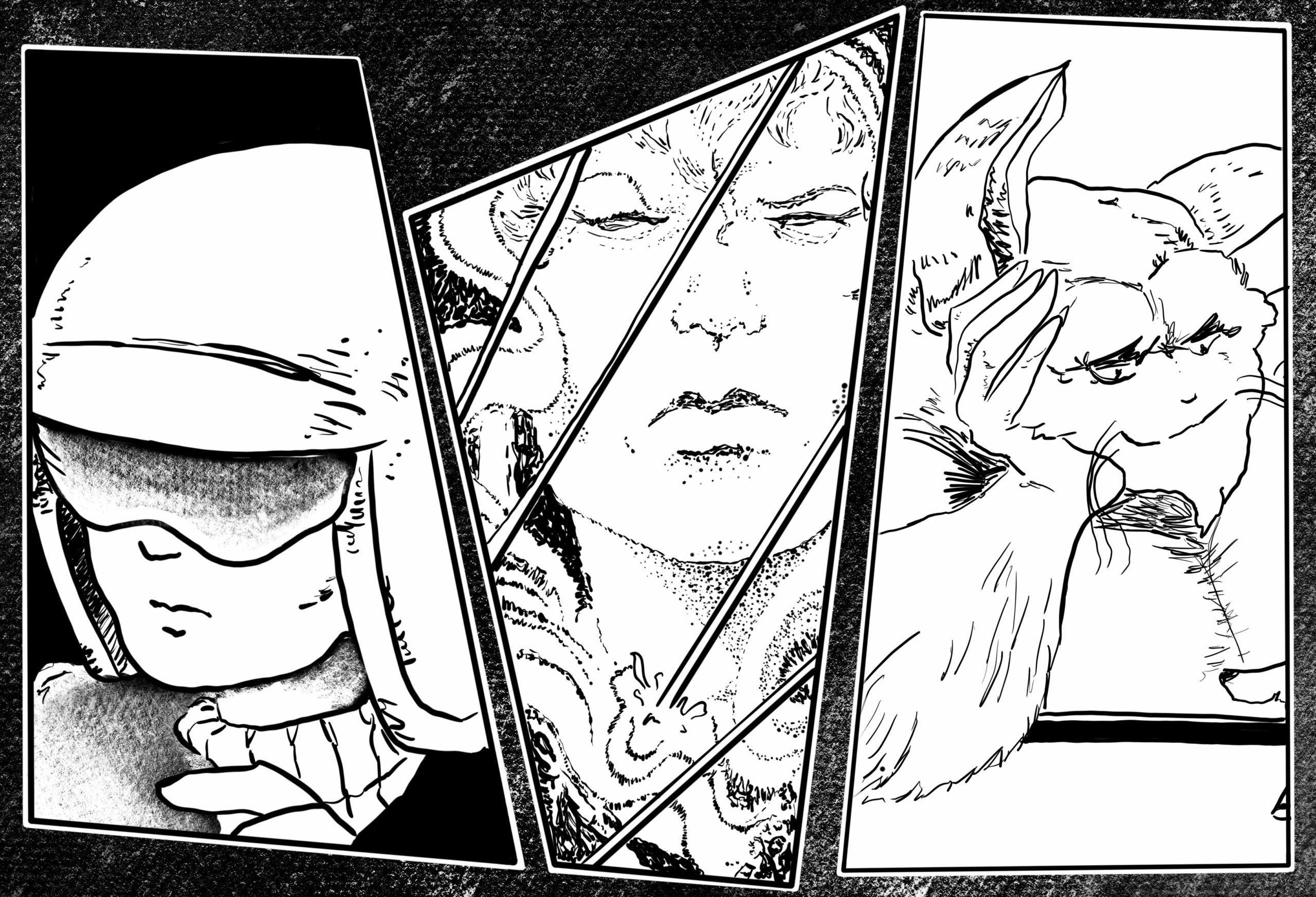 The series starts with Cassandra being interviewed about her time fighting the main antagonists of her galactic universe – the Bono Kiro – after they make a sudden reappearance. From the outset, we see our protagonist depicted as a tired, cynical, older woman who recounts fighting in a war in her youth without any traces of patriotism or pride. She’s a major contrast from the usual headstrong and optimistic protagonist that dominates the sci-fi and coming-of-age genres.

This framework makes her recollection feel intimate and real, but it also sets the stage for Wood’s worldbuilding, allowing the comic to emphasize a war of truly galactic proportions – not just the standard two-species conflict. That, in turn, prevents the series from falling into the trap of having humans come in as the allied third party to help out the good side and save the day, enabling the comic to capture the complexity of war from all sides.

From that interview, the reader learns that Cassandra is the daughter of the President of the United Nations. She is also the first human to be accepted into the Galactic Academy. Now, despite those two impressive facts, she is a bit naive, wide-eyed and excited at this stage in her life. Surrounded by many different types of creatures and cultures, cast against the backdrop of cool and beautiful scenes of space, it’s no wonder Cassandra is a bit awe-struck at first.

However, soon after being accepted into the Galactic Academy, Cassandra faces the rude awakening that Earth and its inhabitants aren’t well-regarded by other galactic species. She faces discrimination and bullying for her humanity but is eventually able to befriend the other outcasts, who later become the supporting cast and key characters that help in winning the war against the Bono Kiro.

Speaking of the Bono Kiro, while they are universally accepted as the bad guys, the author does a good job of portraying them as dangerous and smart enemies. Wood depicts them as brutal but calculating, and their leader is always calm, collected and diplomatic. That cunning is on full display in an arc where their leader takes advantage of Cassandra’s father’s desperation to find a solution to Earth’s problems. By portraying themselves as a necessary evil, the Bono Kiro entice her father into an alliance, despite his daughter’s affiliation with the Galactic Academy.

The Bono Kiro aren’t the only ones well-personified: Wood also makes it a point to highlight that the main cast are naive, idealistic and hopeful kids. This makes their reactions and experiences more relatable, especially when moments of destruction and grief are shown. Conversely, in moments of solidarity, as they seek each other out when they are fighting or upset with one another, their compassion for each other can be felt through the pages. But most importantly, the reminder that the characters are kids throughout the story makes the coming-of-age aspect of “Wandering Star”payoff. When reading this series, you grow with the characters, learning all the lessons they learn throughout the struggles of their war experiences.

Visually, “Wandering Star”is a product of its time, as the graphics add to its charm, make it even more endearing and unintentionally establish it as a classic 90’s sci-fi period piece. But, what really makes the art stand out from other comics is that it’s all hand-drawn, even down to the detailed line work and intricate stippled illustrations. This personal touch is also a really cool time capsule or footnote to the indie scene in comics.

Aside from the amazing hand-drawn art and the epic timeless story, you should read “Wandering Star” because it’s one of the best examples of a “labor of love” in existence. The story behind the comic’s creation is equally compelling: Wood worked on this book while she had a full-time job. Furthermore, the version of “Wandering Star”available for purchase is the second version because Wood wasn’t satisfied with the initial iteration and felt compelled to redo it to perfection. Wood embodies the spirit of a true artist and made this project not because she had to but because she was passionate.

If you want to support this fellow creative, you can leave a review on the Amazon listing for “Wandering Star”after you purchase it. In addition to bringing attention to this diamond-in-the-rough by leaving a review, you can even get a hand-drawn character illustration from Wood. All you have to do is consult the gallery of illustrations on Wood’s website, then email her a link of your Amazon review and the number of illustrations you would like. What are you waiting for? Go out and give this comic a read.