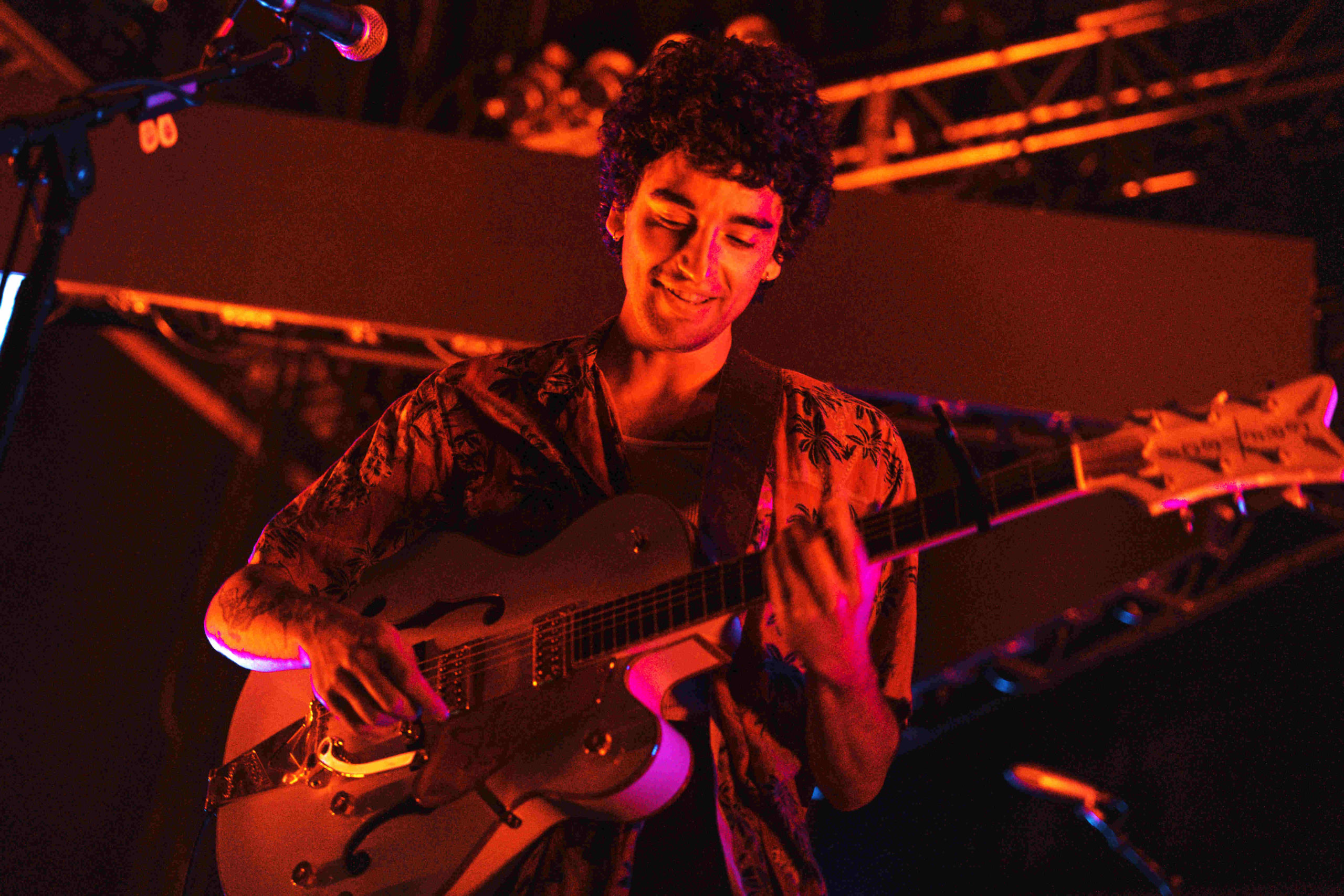 Melchor in performance on March 10 at the House of Blues Dallas. Photo by Tatwik Bodepudi | Mercury Staff

Indie folk-pop musician Adam Melchor opened for Chelsea Cutler’s “When I Close My Eyes” tour along with ROSIE at the House of Blues Dallas.

“Melchor Lullaby Hotline Vol. 1,” Melchor’s latest album, was inspired by his ”Lullaby Hotline” (973-264-4172) project, which was intended to connect with fans and test-drive new music by sharing a new song every Sunday. The hotline was created amidst COVID-19 lockdowns, Melchor’s soothing tunes contrasting greatly against the heartache of quarantine. This hotline is still in use; texting it gives updates about the artist and his current works in progress.

Melchor opened his House of Blues performance with “Last Time,” a somber song expressing the sadness and anxiety that comes with goodbyes. Melchor’s sweet guitar playing was backed by bassist Matt Olsson and drummer Mano Ruiz. “Last Time” is a great introduction to Melchor’s music and a great transition from ROSIE’s fast beats and high energy.

Following that slower song, he performed “I Choose You,” which music-listeners can find on multiple music platforms in its normal, upbeat form or as a more relaxed “Wedding Edition”. Melchor’s adorable personality shone through his guitar skills and clear passion for performing; he didn’t skimp on audience interactions, continuing to share personal anecdotes and funny quips throughout the show. Despite a majority of the crowd being unfamiliar with his work, he had the crowd laughing and swaying to his songs, displaying his skills as a performer.

“Moon in the Morning” was by far one of my favorite performances of the night. The song describes a romantic partner who has other priorities, one who’s prone to disappearing like a moon on the verge of daylight. The song is bittersweet, with a serene beat and tone, but has a story that tugs on the heartstrings of anyone who has wished someone would “lay in the bed for a moment” instead of leaving.

Melchor talked about how his music career wasn’t successful till the release of his single “Joyride,” one of my personal favorites. He originally worked at a pizza place and performed small gigs at restaurants; after a long road trip to clear his head and experience more self-exploration, he wrote “Joyride,” a sentimental tune that shows his talent for storytelling and is reminiscent of adventures with old friends and the calm of countryside drives.

Melchor redefines “indie-pop” with a folk twist, creating a special aura over the usual chaos of a concert crowd. It is not just his music that garners attention, but his cheeky smile and attention to his band members and audience. I highly recommend listening to his music, or perhaps catching one of his concerts on Chelsea Cutler’s tour. Unlike a “Moon in the Morning,” Melchor won’t be disappearing from the music scene anytime soon.