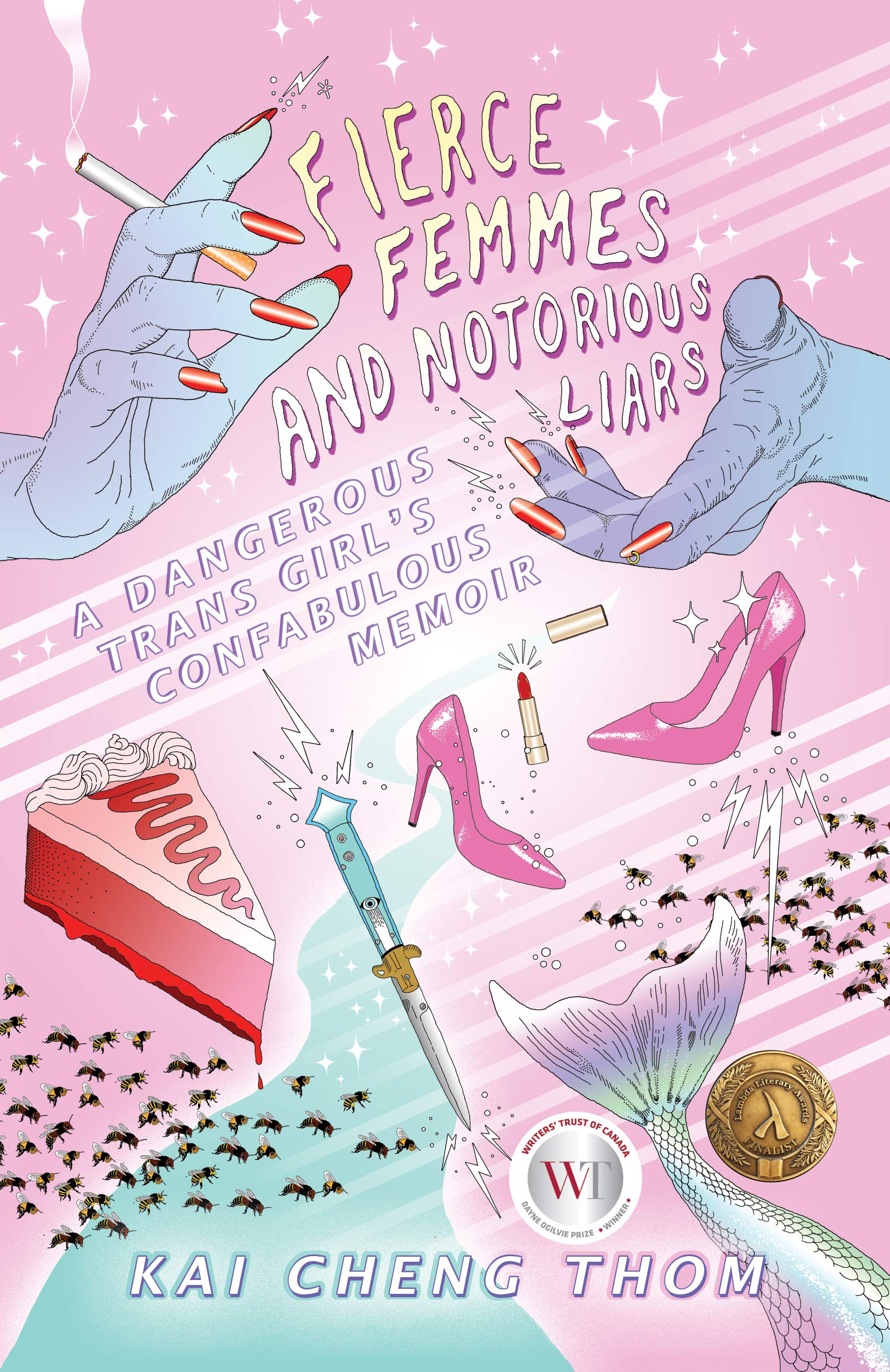 Running away from home, reinventing yourself and encountering roadblocks along the way – it’s a typical structure for a typical coming-of-age novel. However, “Fierce Femmes and Notorious Liars: A Dangerous Trans Girl’s Confabulous Memoir” is far from a typical story.

“Fierce Femmes” follows a young, first-generation Chinese-American girl’s journey of self-discovery and recovery with glittering prose. Every sentence feels like a Baz Luhrmann blockbuster or the Harley Quinn dream sequence from “The Suicide Squad”, with descriptions leaping off the page to pull you into their fantastical world.

“Instead of kicking, I blew a kiss at the TV,” the novel’s unnamed narrator recounts. “A spark jumped from my lips, skipped off my palm, and darted…The screen exploded in a glorious symphony of electricity and shattering glass, and a thousand razor shards flew through the air and turned into crimson butterflies that danced through the room on their way out the window.”

The story doesn’t pull punches on discussions of trauma and violence. Readers may want to be careful around Thom’s descriptions of assault, police brutality and self-harm. Even so, I found it more of a healing book than a hurting one. This book bucks all stereotypes of a transfeminine victimization narrative: when the main character is tailed at a bus stop, for example, she beats the snot out of the creep with martial arts mastery, and every subsequent fight scene matches it for power and tension. Thom’s action is hair-raising and cathartic, which serves the story she’s telling well.

After the titular fierce femme leaves her childhood home for the “City of Smoke and Lights”, she finds family in mentors like Kimaya and Rapunzelle who help her get a shoebox apartment and a shady doctor. Despite their desperate circumstances, she’s overjoyed to be surrounded by women who understand her – and that emotion is incredibly understandable, with the way Thom renders them in fairytale prose. There’s alchemy in the way she takes these women’s shared pain and turns it to gold, a collective healing that takes place once they find and support one another through the events of the novel.

“Fierce Femmes”, while labeled as a memoir, smudges the line between truth and fiction beyond recognition. The exact events of the story are – as its subtitle suggests – confabulous, meaning it fills in gaps in the details with fabricated facts and experiences. The author cites author and activist Audre Lorde’s concept of “biomythography” as inspiration for the tale, weaving together history and mythology. It reminded me of Tim O’Brien’s ever-relevant “The Things They Carried” and its interplay between “happening-truth”, or verifiable events, and “story truth”, understood as genuine experiences, even if the details are somewhat fictionalized.

“I will tell you everything—the truth, the whole truth, nothing but the truth—someday soon, I promise,” our narrator writes to her sister back home. “I’m still just figuring out what exactly the truth is, you know? Sometimes fiction is truer than facts, and the trouble is knowing which fictions are facts and which facts are fictions, if you know what I mean. I’m not sure that made sense, but whatever.”

Still, I hesitate to call her an unreliable narrator, as she’s fairly reliable in telling you when not to trust her. Her letters to her younger sister, claiming that there’s “nothing to worry about, definitely no violence or murders or anything” are transparent, with the paragraph before them describing just that, and an outright lie is swiftly followed by an apology and a retelling. Now, if that retelling includes elements like zombies and magic, well… it’s more about the emotions involved, anyways.

Even with that element of unreality, the world built up throughout “Fierce Femmes” feels solid and grounded. There’s not too many settings overall, with the main body of the novel occurring in the City of Smoke and Lights’ downtown district, but every sparkling turn of phrase and neon-glow descriptor has me forgetting that this wasn’t a graphic novel. The magic here is tangible in a way you don’t find in many other books and frankly, I much prefer the glorious Alzena the Witch to any witches offered by an Author Who Must Not Be Named, whose writing is soundly beaten here in both skill and politics.

I’ll admit to being skeptical at the start. Any story that begins by proclaiming itself “the story of…” is suspect in my book. Thom’s debut novel, however, proved me wrong with every page. This is the story of a dangerous girl, one who learns how to stop hurting herself and fall in love. And if it’s mythologized, so be it: she puts the “fabulous” in confabulous, subverting and breaking free of all expectations.

Because, at the end of the day, her experience rings true. After all, “…maybe what matters is the story itself: what kinds of doors it opens, what kinds of dreams it brings.”

This is the only food website you’ll ever need