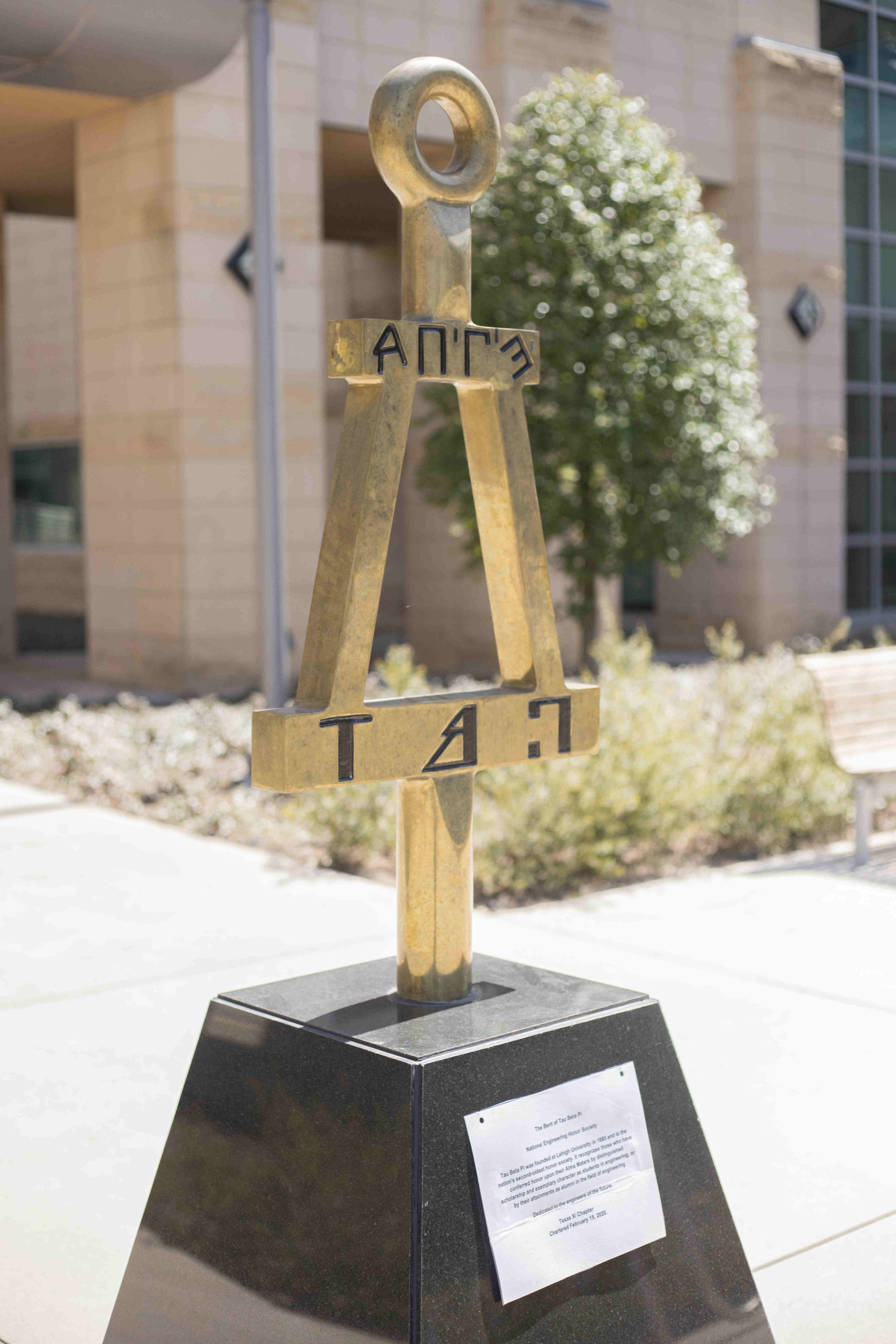 Walking past ECS North’s courtyard, you might have noticed a new monument – one that seems to have shown up overnight. What is it and where did it come from?

This new structure, introduced on Feb. 11, 2022, belongs to UTD’s recently-created chapter of Tau Beta Pi, a prestigious national engineering honors society. Associate Professor of Mechanical Engineering Robert Hart and Associate Professor of Bioengineering Todd Polk are the new chapter’s advisors, who worked to get this monument to commemorate the honor society’s entrance into UTD. The sculpture, referred to as “The Bent,” represents almost 140 years of tradition and honor associated with the organization.

Tau Beta Pi is the nation’s second oldest honor society and the only honor society that represents every engineering field. UTD’s chapter was established in 2020, when 41 individuals were inducted. There are currently 251 colleges with a chapter of Tau Beta Pi, and “The Bent” is a symbol that each of them represent the society.

“[This organization] is meant to provide opportunities to our students,” Hart said. “Almost every engineering school has a chapter, and as we grew the engineering school here, supporting a chapter here was just the logical thing to do. There are opportunities for leadership development, scholarships, networking and alumni activity after graduation, so there are all kinds of benefits to being a member.”

Hart and Polk, who are members of Tau Beta Pi themselves, showed excitement about the statue’s sudden arrival. The professors spent the past couple years raising the funds to get the monument, submitting proposals for its approval and waiting through a campus beatification before it could finally be placed in ECS North’s courtyard. Now that “The Bent” has finally found its home on campus, UTD’s chapter of Tau Beta Pi will be throwing a celebration in its honor.

“It feels wonderful actually, to have The Bent on campus,” said Feriha Ahmad, electrical engineering senior and president of UTD’s chapter of Tau Beta Pi. “Finding it on campus, right in the middle of the ECS complex, lets everybody who walks past it see it. It is really cool to see a physical monument that represents the excellence in engineering at UTD regardless of Tau Beta Pi membership, and then on top of that there’s that extra special, ‘this is for our organization on campus and everything that we’ve done.’ It feels like a monument to all the engineers.”

“The Bent” is a watch key in the shape of a trestle bent, resembling a parallelogram. A trestle is the part of a beam that supports and bears the weight of the structures above it. As such, “The Bent” represents an engineer’s responsibility to their field and Tau Beta Pi’s willingness to support engineers in their endeavors. The Greek letters from the organization’s year of founding, motto and values are inscribed on the statue’s base.

“Excellence in engineering comes with a strong responsibility to your industry, to yourself, to your peers, to the world that you’re creating things for and the hard work and integrity that goes into that,” Ahmad said.

“The Bent” also plays an important role during Tau Beta Pi’s inductions. Students of a certain academic caliber are sent an invitation into the honor society. During the ceremony, inductees are given a smaller version of “The Bent” that is roughcast and needs to be polished, which symbolizes putting in the work to achieve your goals, exemplifying Tau Beta Pi’s fondness of hard work.

Pol said the monument is not yet complete. “The Bent” still requires a plaque that describes what it is and its relation to Tau Beta Pi. Ahmad and the organization’s other officers have been working on the specific wording that will be used for the plaque.

“The UTD chapter of Tau Beta Pi has only been around for two years because UTD as a whole is a very young university,” Ahmad said, “so I think that a lot of people don’t really recognize the name of the organization at first or if they get an email invitation it gets brushed under the rug. I think having [“The Bent”] on campus highlights who we are and gives us more recognition.”

Finding something in common to ‘taco’bout