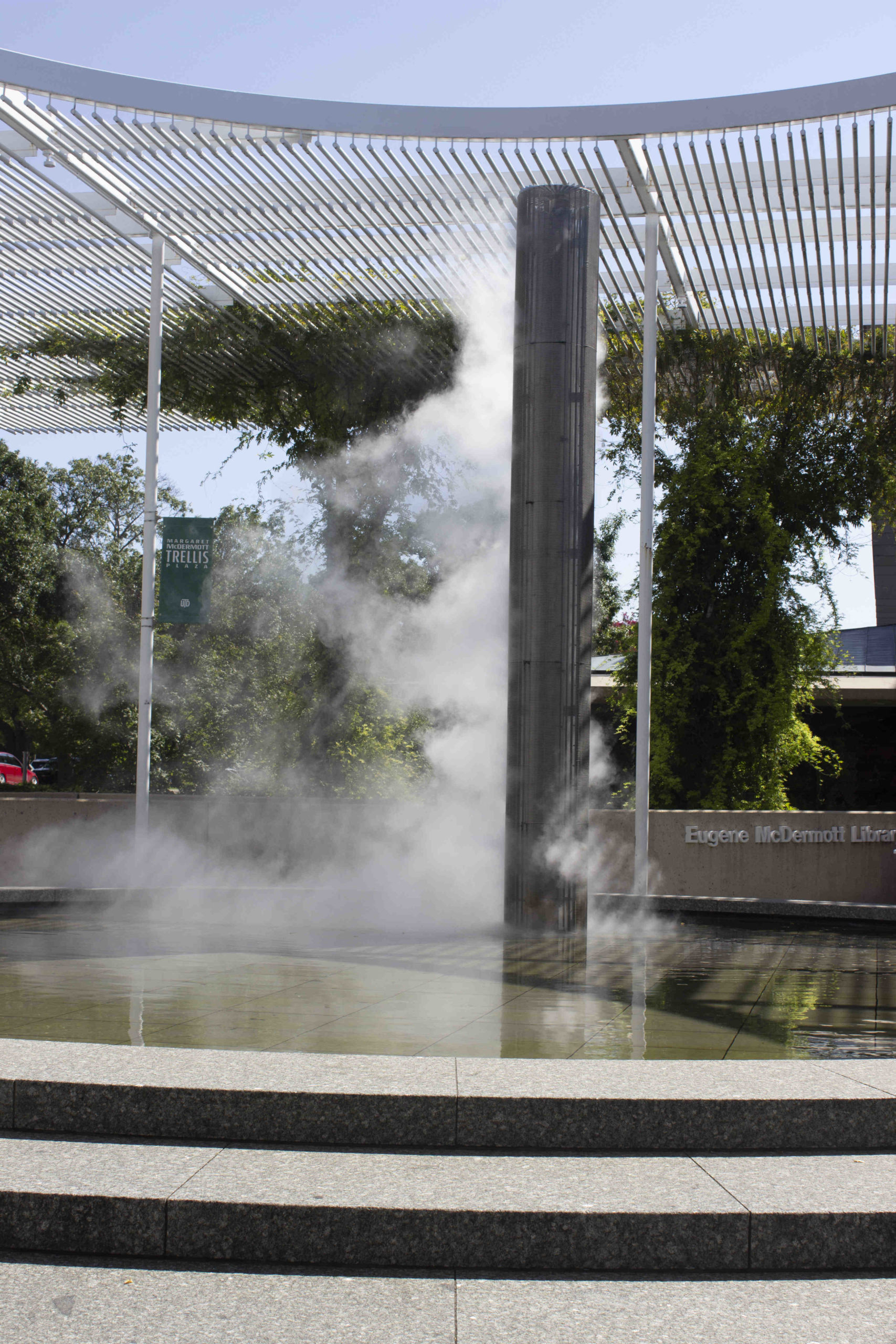 Like many aesthetic elements of campus, the Plinth is a gift of Margaret McDermott. Its cycle is on for three minutes, off for 17 minutes. Photo by Shriya Vyasam | Mercury Staff

Kelly Kinnard, Assistant Vice President for Facilities Services, said that the schedule of the mist column is on 20-minute intervals. It turns on for three minutes and off for 17 minutes. The timing is designed so that the pipes underneath the fountain would not get ruined, based on manufacturer advice.

Eugene McDermott was one of the founding fathers of UTD. When he passed away, his wife, Margaret McDermott, made UTD a campus with more aesthetic appeal and constructed things like the magnolia trees, the Plinth, and the mist column at the Plinth.

“What you see here [gestures towards the plinth area] all the way down to Campbell was a gift from her in 2008,” Kinnard said. “She wanted an actual campus, not just a corporate campus. This was what her vision was.”

The Plinth has become a major attraction on campus for students and visitors, and many organizations hold events there for fundraising and outreach. One of its most prominent features is a mist column in between the Student Union and the Eugene McDermott Library. Due to Texas’ heat and humidity, the mist column was constructed to cool off passersby.

“Because if you’re standing close to it, it cools you off,” Kinnard said. “That’s what it was for. It was to, it was to offer a little bit of relief from the heat and all this concrete.”

The mist column also lights up at night, which provides the campus night life a source to continue hanging out or study throughout the late hours of the night.

“One of my favorite things is to stand down there by the entry circle [gestures towards the area] and look up this way at night,” Kinnard said. “It actually feels like a college campus.”

The infrastructure is surrounded by a type of vine called Wisteria. Eventually, the plant will grow all around the outside border of the Plinth and act as a roof covering the area. The wooden planks on the perimeter of the structure are meant as a trellis for the vine to grow on. Kinnard said there are no construction plans for changing the area in the foreseeable future.

“What I do know is we’re going to try to keep … to the vision that Mrs. McDermott had,” Kinnard said. “What you see here, she approved, and in a lot of cases had a lot of input in how it went. This project here was $30 million … That’s a lot of money. So given that level of investment, we’ve got to keep it looking nice.”

There has never been a vandalism issue in the circle with the mist column. However, there has been a history of students putting rubber ducks or food coloring in the water.

“On occasion they’ll put food coloring to turn them green.” Kinnard said. “Which just absolutely frustrates our people to no end.”

As students walk across campus to attend classes on a daily basis, the mist column offers a way for them to stop, cool off and appreciate their surroundings before going back to the reality of being a student at UTD.

“Some people have said that it’s calming. Some say it makes them want to pee.” Kinnard said. “Whatever it is to someone. I just hope they enjoy it. That’s the main thing.”