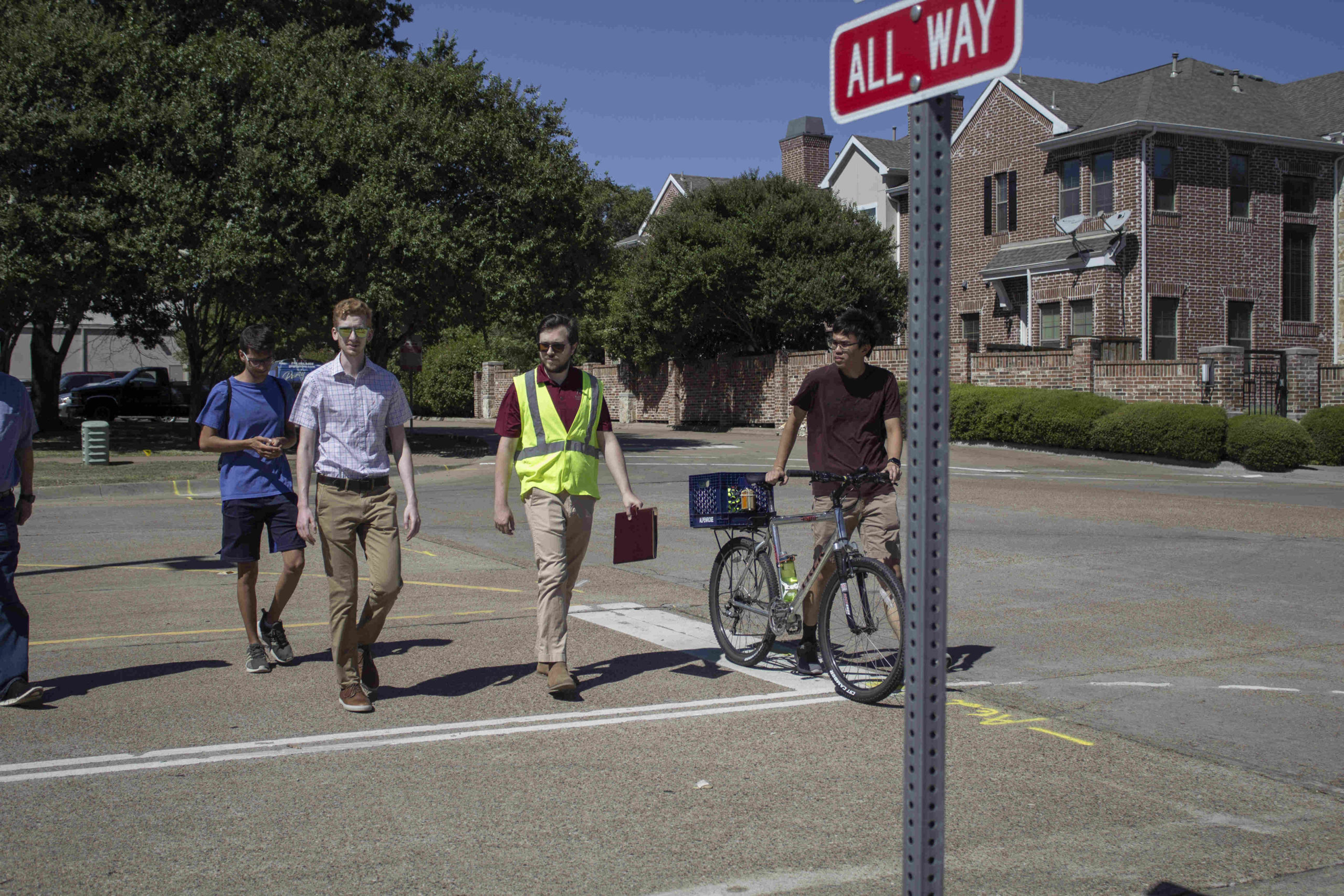 Daniel Herrig and club advocates walked sections of Campbell Road to experience firsthand the difficulties that students encounter every day. Lack of shade and traffic noise were just a few of the main issues encountered. Photo by Ruby Bui | Social Media Manager

Members of the UTD club Comets for Better Transit walked through sections of West Campbell Road and Jonsson Boulevard with Daniel Herrig, a Project Manager with the City of Richardson. The goal of the walkthrough was to gather community feedback on safety issues with the road and possible solutions.

Comets for Better Transit was founded in December 2021 with the goal of creating an environment that is more friendly to those who do not drive, either by necessity or by choice. Before this meeting, members of the group collected feedback from students and locals on the section of Campbell between Waterview and Coit and compiled a list of issues and ideas. Throughout the walk, the road proved hostile as projected, as noise from passing cars made it incredibly difficult to communicate and direct sunlight was almost inescapable. History senior Daniel Yahalom, the club president, explained the group’s goals for the project.

“A lot of us just want to build an environment where driving isn’t the only choice,” Yahalom said. “Because, as we’ve seen today, even though there are technically ways to walk or bike down Campbell or Johnsson, they’re not really feasible options. Our goal is to get students to know that alternatives can exist and to get the city government and university administration to take action on it.”

Herrig—a transportation engineer involved in Richardson’s Active Transportation Plan—hopes to focus on improving connectivity of bike, pedestrian and transit paths in the area. The walkthrough was meant to give firsthand exposure to the issues that local UTD students face in everyday transportation.

“I really appreciate walking with students who I can tell are very thoughtful,” Herrig said. “Y’all are not just bringing up issues, but you’re bringing up ideas also, and so that’s great, to be able to kind of talk about both … I love hearing the ideas, how proactive that is. To try to think of what’s a good solution to the problem I’m having and to be able to work on that together.”

Herrig said that he values community feedback’s use in getting a sense of future development and what needs to be done in both the short and long term. While the date has not been announced, Richardson’s Active Transportation Plan will have an open house sometime in the fall. This event will be an open forum to receive feedback on how connected local walking and biking trails are and how well they service important community destinations.

Mathematics senior and club secretary Devan Bailey commented on the cost of the Richardson area’s deficit in transit. Bailey said that most students don’t go outside off campus beyond visits to Northside, and that the city of Richardson is losing a large opportunity by separating campus from surrounding neighborhoods.

“That’s something a lot of students have complained about– that there’s no campus life,” Bailey said. “And part of that reason is that there’s nowhere to go other than campus. And there’s no places to meet people. Everyone’s spread out—people commute, but then they don’t stay, because there’s no reason to stay. And I think it’s really important to give reasons for people to stay around campus…and connect with the community.”