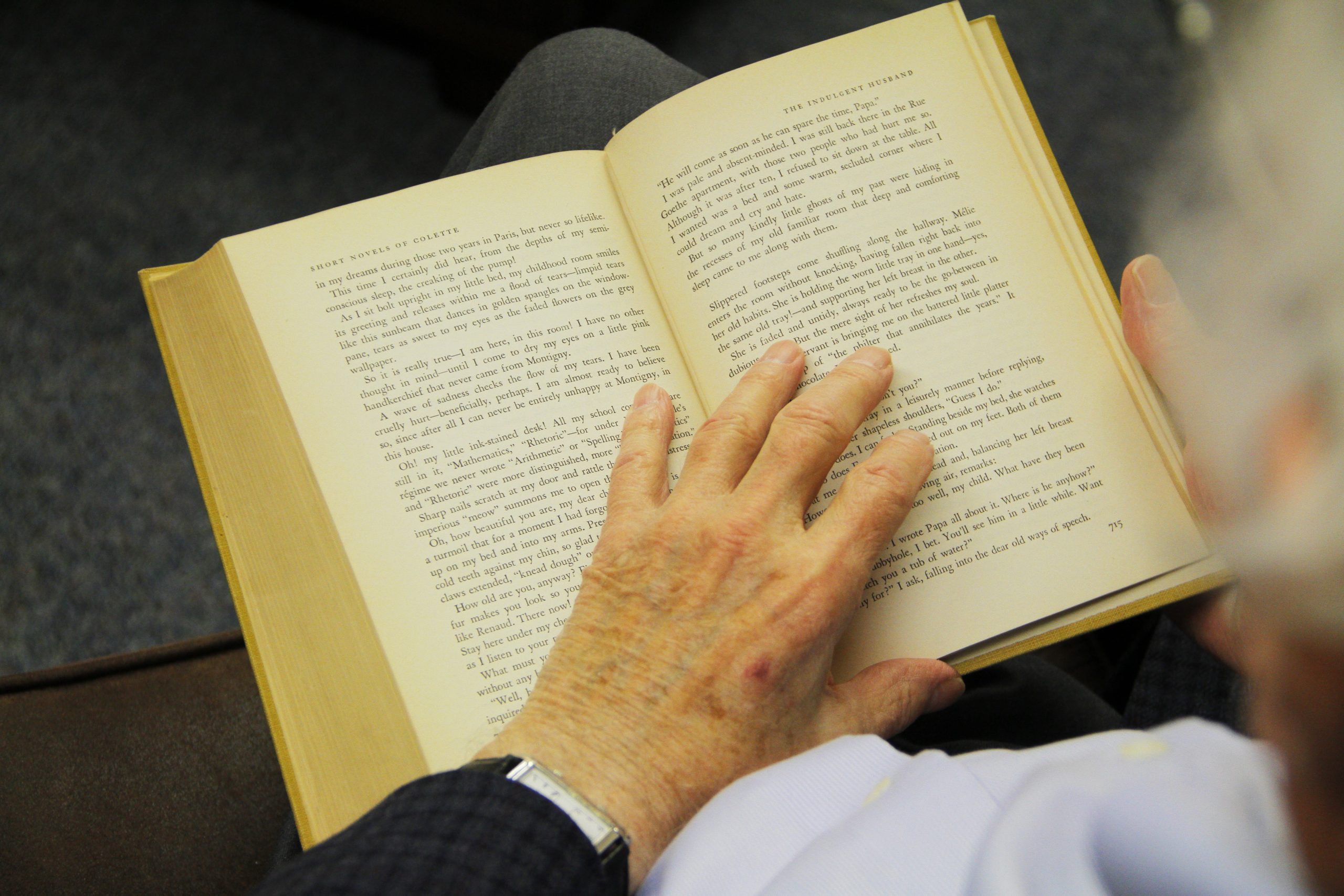 Close reading is one method of analyzing literature, only requiring the text. Photo by Roshan Khichi | Mercury Staff

Leather-bound books and dusty archives are classic images of what research in the humanities may look like. However, what are examples of research in subjects such as literature and poetry?

“I have a certain methodology which takes historical texts as cultural texts,” Murphy said.

“I was trained in new historicism and cultural materialism, and that means I never read a text and then make meaning out of it by itself. I am always going to also want to know what’s going on historically at that moment.”

For example, while she was studying “The Faerie Queene,” a poem by Edmund Spenser, Murphy noted that a character had multiple strange symptoms, and she realized that the symptoms matched a disease called greensickness, which was mentioned in medical texts of the time period.

“I was able to then take that disease and read it back onto the text, so I can say ‘Oh wait a minute, if she’s suffering from this and this illness has social and cultural meaning in the time the poem was written in, then we can read that meaning as a layer on top of what we’re already reading,’” she said.

On the other hand, there are other methods to study text. One such approach is close reading.

“Close reading was developed in response to the G.I. Bill because you suddenly had people coming to college who had not had a classical education, and close reading was one way to give those students access to the text because you didn’t need to know anything else,” Murphy said. “You just needed to be reading the text.”

Another methodology is a theoretical approach in which the researcher reads the texts and applies the ideas of a theorist to make sense of that text. The first step in creating a theory is reading many texts and theories, Murphy said. Then a researcher will compare the texts, and if they still have a question that isn’t answered, it could be a start for a new way of thinking that current theories don’t sufficiently explain.

“It’s an iterative process because each time you’re building on something else. Sometimes I’ll have students who think of it as having missed something in the past, but I don’t know that we as literature people see it that way. Every text has the potential for infinite meanings,” Murphy said. “In my personal opinion, a good theory can help you go ‘Oh’ about a text. A not good theory would make you either say ‘Well duh’ or ‘I don’t know why that matters.’”

When comparing research in the hard sciences and literature, Murphy said one similarity is that both look at an object of study and researchers try to make sense of it and then use it to understand other things in the world as well.

“I will read a text…a bunch of times, (making) notes as I read it,” Murphy said. “I’m doing sense-making of the text. Trying to get at what’s in there, what’s going on, does this look like something I’ve seen before?”

Underneath the umbrella of literature is the discipline of creative writing. Nomi Stone, assistant professor of creative writing, is a poet and anthropologist, and combines those two subjects in her work. Her first two books are inspired by her anthropology research for which she spent two years doing field work in military training camps around America.

“The project entailed being on the ground interviewing a lot of people, which is called ethnographic research,” she said. “I interviewed military personnel and role-players from the middle east as they acted out these different roles within war.”

These sites were made to look like middle eastern villages, where soldiers can rehearse war before they are deployed. Stone approached her project with questions, but tried to stay as open as possible so as not to overdirect the study.

“In this book, I was researching militarism and violence and also the impact of the lives of those who are conscripted within these spaces, the repercussions of working in these spaces, and what would it mean to be a person used as a military technology,” Stone said.

The methodology used in anthropology is qualitative rather than quantitative, so researchers engage with memory and people’s impressions in their own subjective lens. Stone’s two disciplines provide different approaches to reaching a conclusion.

“I write in two different ways, both anthropological essays and poems,” Stone said. “In the poems I am more interested in doubt and questions. I feel less urgency and give more room for the reader to form their own conclusions. In anthropology, it’s through a lot of slow observation and that allows you to come to a point of critique that feels true to you.”

Stone said many different books and poems use some kind of research.

“Especially if you’re going to use metaphors in your poem, for example, if you want to use glaciers to talk about the heart, you have to really understand how glaciers themselves work so you might do a deep dive into the science so you might research that in books, on the internet, or ask scientists,” Stone said.

In addition to writing and publishing poems, Stone reads essays and articles in the field. Articles researching poetry may cover questions of craft such as manipulating sound and syntax.

“Syntax, which is the relationship between the sentence and the line as it unfolds in a poem, is a really important dimension because it helps you control the release of revelation the poem so there might be essays about how to think about syntax,” Stone said.