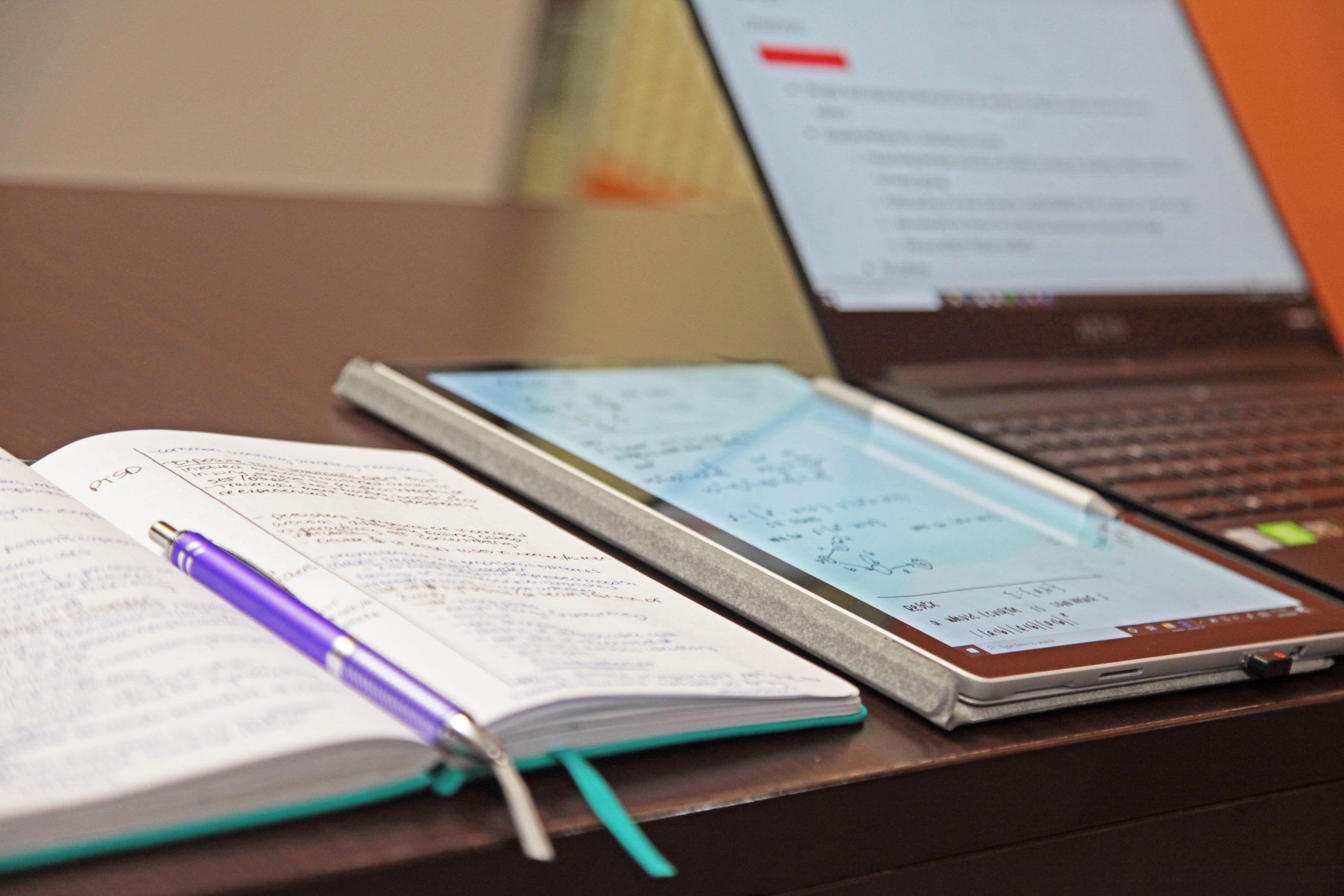 In a survey by The Mercury, 54% of respondents said they took notes on everything during class including what the professor says and the content on the PowerPoint and board. Photo by Pavan Tauh Mercury Staff

There is a myriad of ways to take notes during a lecture, some of which students carry over from their high school experiences and some that they learn while attending college. Survey results reveal that, despite recent studies showing otherwise, UTD students favor written notes over typing out their notes electronically.

In a survey of 102 students conducted by The Mercury, 23% of respondents said they took notes on an electronic device such as a phone or laptop. As previously referenced in a previous Mercury article, there is evidence to suggest taking notes on a laptop does not affect information retention. In a 2014 study published in Psychological Science, the authors wrote that although more notes are good, people who type out their notes tend to transcribe lectures verbatim rather than trying to process the information given, which they claim is detrimental to learning.

In the survey, 54% of respondents said they took notes on everything during class including what the professor said and the content presented via PowerPoint or on the board. International political economy senior Alyssa Aman writes down both what the professor says and her own interpretation of the material in her notes. She handwrites her notes using colored pens which she said helps make the information stick in her brain, and said typing out notes didn’t help her do that.

“Each color is like a different part. One color would be the topic and then another color will be the subtopic, and then another color would be all that information within that subtopic,” Aman said. “Then along with whatever the professor says, whatever’s written on with the PowerPoints, I would write down everything in my own words and divide it. Like, let’s say they said one thing or they showed one thing, after I finished writing that I’ll write a semicolon and then write it in my own words.”

Senior lecturer of the Honors College Eva LaDow requires her students to write out their notes during class to force them to get the most salient pieces of information down, which she said is how students took notes when she attended university, graduating in 2004.

“I don’t do it to be cruel or not to acknowledge the technology of the modern era,” LaDow said. “I want students to be focused on the class, just not distracted by technology.”

There are students, however, who don’t take notes because it doesn’t benefit them or they don’t feel the need to. In the survey, 7% of respondents said they did not take notes. For project-based classes or classes that deal with a few important concepts, note-taking becomes less necessary.

Psychology senior Vartika Varshney said she doesn’t take notes for her business administration minor classes, and she seldom sees other students taking notes either. She said the material they work with involves more rote memorization and intuition than application, and that professors usually will post the slides for students to use.

“I know my first couple of JSOM classes, I did take more notes just because I wasn’t sure of the difficulty level at first. Then after that I realized … you don’t really have to take as many notes. Sometimes I’ll write a couple things down, but it’s like more things that I want to remember because all the content is usually there. The professor’s PowerPoints and stuff, they already have all the things that you need to know on there.”

The Student Success Center teaches students how to be successful in their courses, including improving their note taking methods through strategies such as mind-mapping, organizing and paraphrasing. Success center peer leader and biology junior Aliya Arni said that most students who come into the center have very basic note-taking methods and write everything the professor says down without understanding it. She said some of the strategies peer leaders teach incoming students is learning to paraphrase and synthesize information rather than writing everything down word for word.

She said she doesn’t advise against using laptops to type out notes and that she recognizes that both methods have their benefits, although she personally prefers writing her notes. She said the most important thing is to paraphrase and think about what is being said during the lecture before writing it down, although the strategies and needs to write notes down differ for each type of class.

“It really is trial and error to a certain extent because you really just need to try and see what works for you,” she said.