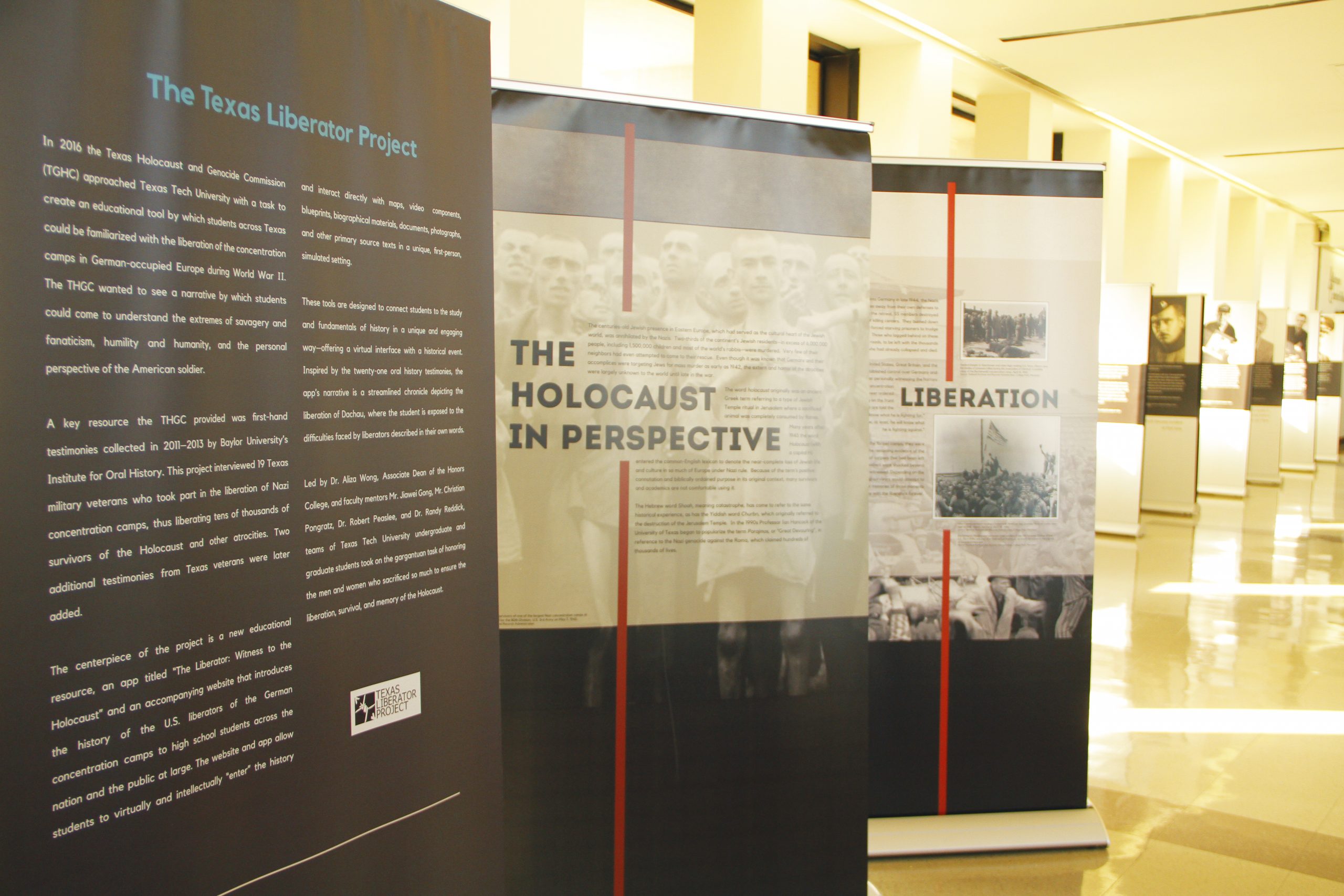 The banners will be on display outside the Ackerman Center until March 12. Photo by Roshan Khichi | Mercury Staff

In a hallway just outside the Ackerman Center for Holocaust Studies lies an array of banners featuring 21 individuals: the Texas servicemen who liberated concentration camps in the aftermath of World War II.

This is “The Texas Liberator: Witness to the Holocaust,” an exhibition curated by The Texas Holocaust and Genocide Commission and is part of the Texas Liberator Project. The exhibit, originally created at Texas Tech University, is located on the fourth floor of the Erik Jonsson Academic Center and will remain there until March 12. From March 7-10, it will be moved to the Alumni Center for the Annual Scholars’ Conference on the Holocaust and the Churches.

The banners depict an introduction of the American perspective of World War II and the rise of Nazism, then into firsthand accounts of Texan soldiers who witnessed the Nazi concentration camps. Each account is detailed and deeply personal, a diary of individuals who could not forget what they saw.

Nils Roemer, interim dean of the School of Arts & Humanities and director of the Ackerman Center for Holocaust Studies, said that the exhibit was brought to UTD in honor of Holocaust Remembrance Day, which was on Jan. 27.

Along the hallway, the tall black-and-white banners are lined up in rows, carefully placed in niches. The banners illustrating the history of the Holocaust and a map of the concentration camps are situated on the left side, while the liberators’ accounts and quotes are written on banners occupying the right side. Roemer said that placing the exhibition in a public hallway, rather than a gallery, invites students who might never have visited a gallery to still come across the exhibit.

“We tend to go for things … that we’re interested in. And I think it’s part of your educational experience on campus to be challenged and confronted also with things that you didn’t look for,” he said. “It’s not a fancy place, and it’s kind of a little weird to see it in that way, but I think it’s in many ways perfect because it gets much more attention where it is right now than if I would have put it into some fancy museum somewhere.”

Roemer said he wanted to have the exhibit because often, people think of the Holocaust as an event that happened long ago and far away, but realizing that many local Texans were involved in liberating camps brings it closer to home.

“We work together with the Texas Holocaust and Genocide Commission that had also sponsored this project, and the woman who had organized it — Aliza Wong — we had invited her last year as a guest speaker to come to one of our conferences,” Roemer said. “We then thought, well this is really an exhibit that we would like to have.”

Wong, associate dean of the Honors College at Texas Tech University, said that she and Pete Berkowitz, the former chair of the Texas Holocaust and Genocide Commission, wanted to create a project with the Texas Liberators’ oral histories that would impact the younger generation.

“We started off with an app and I gathered a team from five different colleges. As we started working with the students, we just started to get more and more excited about the project,” she said. “Beyond building the app, we thought, well, why don’t we make a book? So we wrote a book and then … we said, well, we really need a website because without the website, there aren’t the educational resources. And then we thought to ourselves, wouldn’t this be a beautiful museum exhibit.”

One of the banners in the exhibit highlights a man named Raymond Stewart Watson, who recalled his experience walking through Buchenwald, a Nazi concentration camp in Germany.

“I went through (Buchenwald). They had a lot of steel doors and stuff. You can see from some of the pictures we have that they stacked the bodies. They were just stacking up. They’d have them facing one direction on the first layer … And they were — I couldn’t count how many people that were just — just dead,” the quote reads. “Every one of them were skin and bones. It was awful. I mean the odor was bad, and well, you just didn’t think a human could treat humans like that.”

Wong said that when she teaches the Holocaust and the liberation period to her students, she reminds them that many of the young men who fought in the war and liberated the camps were only 18 years old, just like them.

“Some of them had never left the state of Texas. And all of a sudden, they enlist where they are drafted, and they are sent in trains to New York and Louisiana, places they’ve never been, never imagined that they would go,” Wong said. “Next thing you know, they’re on a big … boat and are crossing the Atlantic ocean, and the doors open, and they’re landing on the shores of Normandy and fighting their way through the battle … then all of a sudden, there they are in Dachau.”

True to form, plenty of the banners depict pictures of young men  posing in military uniforms. Their youthful faces contrast starkly with their accounts of the concentration camps.

Roemer said that he hopes that the exhibit gives students a different perspective and that this exhibit relates to many students who come from different countries and have been very close to other forms of violence.

“I’m teaching a class on refugees. When we initially asked the students to introduce themselves, out of the 40 or so students that are in class, over 10 of them said that they themselves or their families had been refugees,” he said. “Those college kids that went to liberate the camps became the witnesses to atrocities, and many of us are in those positions as well … If we don’t want to be tormented by those memories individually, we need to find ways where we don’t just celebrate our diversity on campus but where we … think about ourselves, not just as common students, but also as individuals who came from other places and that some of these places were places of violence of sorts.”

The app for the project can be accessed through the project’s website, texasliberators.org. It features a first-person perspective that allows students to experience the end of World War II in Europe and the work of the Allied Liberators releasing prisoners and victims from Nazi concentration camps. The app’s narrative is inspired by the liberators’ testimonies and is a chronicle depicting the liberation of Dachau. Users will confront difficulties faced by the liberators in their own words.

Wong said that she worked with computer scientists, Holocaust scholars, and a Ph.D. student to create something that was interactive while respecting the history and the story.

“That’s where really came together as a group with historians, archivists, Holocaust scholars coders and graphic designers to say, ‘Okay, so how do we make this historically accurate?’” Wong said. “So on the app, Dachau is actually created to scale. We actually sent one of our graphic designers to Dachau to actually go into the archives, take a look at the blueprints and try to understand everything from the foliage to … what did the barracks look like. We went back to old aerial photos of what were the words that were printed on the rooftops of one of the buildings.”

Roemer said that even when we try to forget something bad in our lives, in a way, everything stays with us — that’s how our memories work.

“Here you have these — I mean look at these pictures of these older men … they are now grandfathers, right? And when you hear all of a sudden how they talk about something that happened so long ago, you still see in their faces how painful these memories are,” Roemer said. “You get to understand more, in many ways, (that) the history never quite ends.”