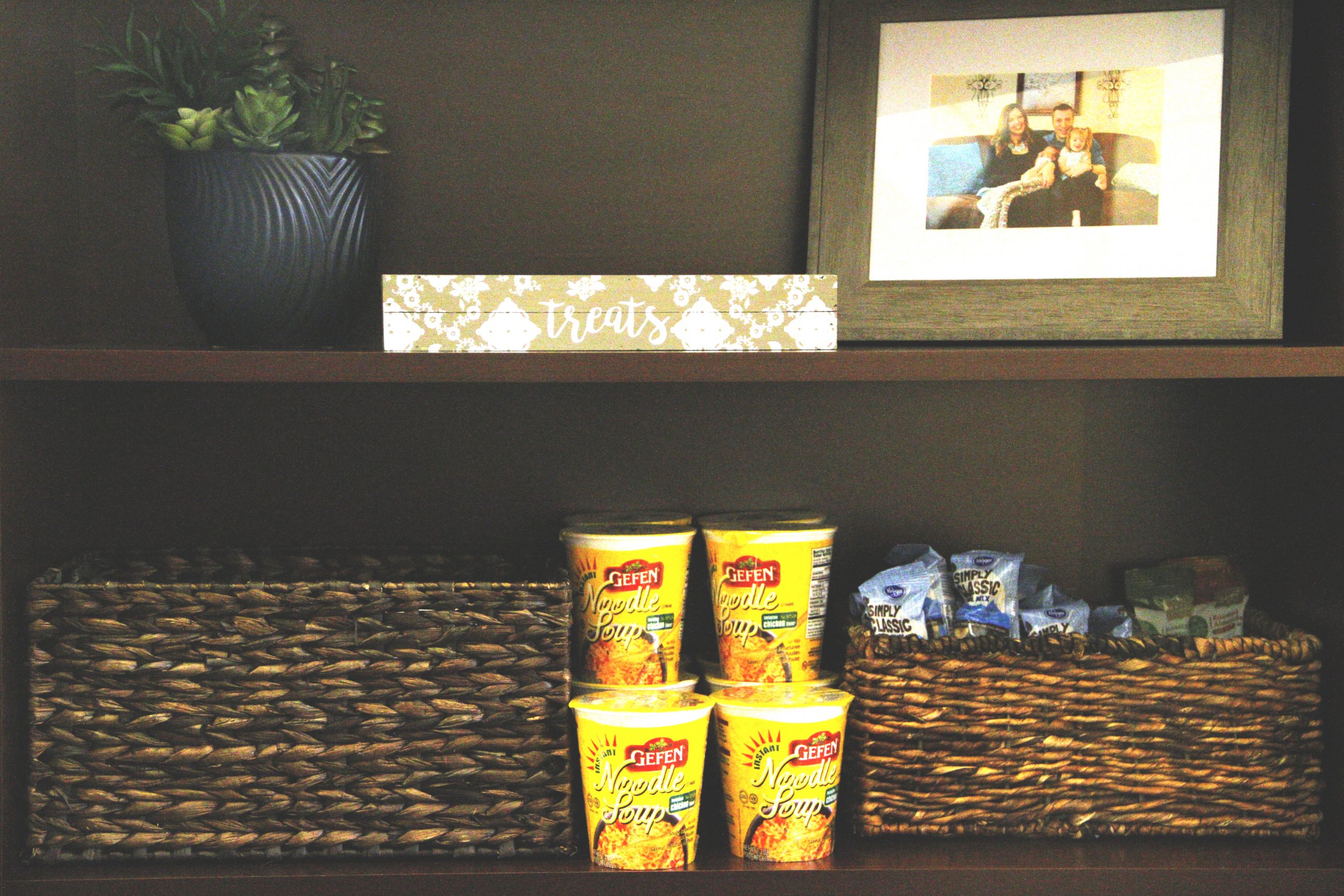 Schwark was rearranging her office last semester when she decided to use her bookshelf space as a makeshift pantry. Photo by Roshan Khichi | Mercury Staff

After finding out that over 40% of college students face food insecurity, one professor took matters into her own hands, building a makeshift pantry in her office for students.

Senior lecturer of Brain and Behavioral Sciences Gayle Schwark gained attention for her food pantry on Feb. 10 when she sent an email to her students letting them know it was available to them. One student shared the email on Twitter, where it received over 60,000 likes and a GoFundMe raised nearly $300 for the pantry. Schwark opened the pantry last fall, and now runs it using donations and her own money.

“I was in the middle of rearranging my office and stuff and I was like, ‘You know what would be a great use of this bookshelf instead of books that nobody’s ever gonna read? How about I put some food on the shelf,’” she said. “The next day, I’d gone to the grocery store and just picked up a bunch of stuff and bought some baskets and that was kind of how it happened.”
Although campus resources such as the Comet Cupboard offer assistance to students, Schwark said she wanted to decrease the stigma surrounding food insecurity.

“I think there shouldn’t be a stigma … I don’t think anybody should feel any less than proud to be saying, ‘Hey, I’m spending my money on going to college, so sometimes I need some help,’” she said. “There’s nothing wrong with that. I just thought if I can at least tell them there’s no need to explain, just come on in, grab something and go, then hopefully the students who maybe don’t feel comfortable utilizing other resources might use this one.”

The Hope Center for College, Community, and Justice found that food-insecure college students were more likely to have lower grades but were more active participants in the labor force. Their 2019 survey found that less than 10% of food-insecure students used a campus food pantry.
Schwark said that an act of kindness from a stranger, along with current statistics on food insecurity, are what prompted her to open the pantry. She said that at the time, she was working at an accounting firm when a client came in to pick up payroll for his employees. During their interaction, she complimented the employees at his restaurant. Schwark said that her compliment prompted the client to hand her a stack of coupons for free meals.
“This was the day after I had just eaten the last of the food in my house. It happened in that moment to be that I was either going to eat or I wasn’t going to eat and he just gave me enough food to last me like two weeks probably,” she said. “To him it was just like, ‘Hey, I got these in my pocket, here you go,’ No big deal kind of thing. But to me it was the difference between eating and not eating. And so I kind of felt like now that I’m in a position where I can try and do something similar for people who need it, I would like to be able to do that.”

Once Schwark found out her email to students had gone viral, she had mixed feelings.

“I don’t feel like I should be getting praise for this because there’s so many people who are doing so much more than I’m doing and those are the people who deserve to be in the spotlight,” she said. “The amount of positivity that’s come from this has been incredible. There are so many people who want to help and who want to make a difference. People have emailed me who said, ‘You’ve inspired me to do this’ and ‘I want to do the same thing’ and stuff like that. That part of it has made all the attention worth it, I think.”

Schwark said she’s been redirecting those offering donations to the Comet Cupboard, which is located MC1.604 in the basement of McDermott Library. The Cupboard offers non-perishable food and personal care items free of charge to currently enrolled students. Students are allowed to take one to four items per visit and are also welcome to volunteer using the application on their website. The site also features a list of needed items such as canned food, dried pasta and boxed milk. Student organizations can also sign up to host food drives for the Cupboard through their site. Online donations can be made at giving.utdallas.edu/CometCupboard.

Schwark said that her generosity isn’t unique, especially at UTD.

“The university is full of people like me. There isn’t a single person I know that if a student walked into their office and in any way indicated to them that they were unable to afford food, people would take their own personal lunches and say, ‘Here, eat this.’ Everybody would do this,” she said. “I think that’s what I wish more students would realize is that the whole faculty, all the staff, everybody cares about the students to the same degree, if not even more than I do.”