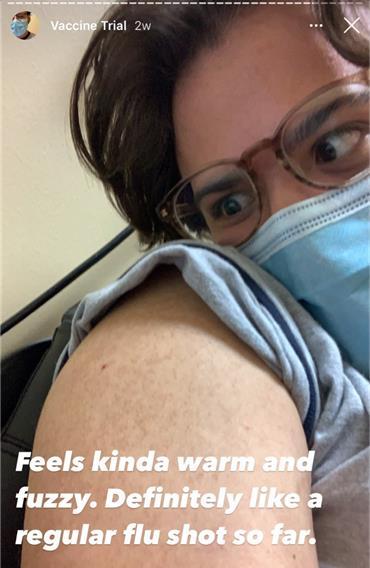 Andujar documented his experience with the vaccine trial on Instagram. (Photo courtesy of Andres Andujar)

Amidst a pressing nationwide need for a vaccine, a UTD student took it upon himself to participate in a two-year COVID-19 vaccine trial.

After seeing ads for vaccine trials on social media in September, accounting senior Andres Andujar started researching pharmaceutical companies to find ones currently conducting vaccine trials. He settled on the pharmaceutical company Pfizer, which currently works with German company BioNTech SE on the development of a COVID-19 vaccine through the modification of mRNA. So far, Pfizer has spent about $2 billion on vaccine development. According to an open letter from Pfizer chairman and CEO Albert Bouta, Pfizer plans to apply for Emergency Authorization Use in the U.S. after the safety milestone of the vaccine is reached by mid-November. Pfizer could not be reached for comment.

“I think, as long as the trials have to be, the obvious need for something to be ready soon meant that people have to act fast and get involved. And the science needs to get done quickly and efficiently if we’re going have a global vaccine that everyone can use in like a year,” Andujar said.

Andujar signed up for the trial on Sept. 25 and was notified that he qualified within 48 hours. He said that the company had collected enough volunteers but was still looking for diversity in the genetic profile of its participants.

“They were excited about my participation because I was Latino, and they had already met their quota because like … basically everyone from any part of continental Asia was covered,” Andujar said. “They basically only needed Latin Americans, Black, Alaskan-American — basically minority ethnic groups.”

His mother wasn’t pleased, he said, and it took him a while to assuage her fears. He approached his father about the trials first for his approval, and later his mother.

“She freaked out, and then I told her the signs, and she became slightly less freaked out and was still pretty mad at me when I left to go to my appointment,” Andujar said. “And then I called her at the clinic, and I was like ‘Hey, I’m here. It’s all good,’ and then I called her, I’m like ‘Hey, they injected me. I’m all good,’ and then after the observation period was over I was like ‘Hey, I’m fine. I’m coming home.’ So I tried to assuage her fears, and I think overall they ended up being fine with it.”

Andujar said he spent the night before his appointment reading articles about the vaccine technology the company used, and he couldn’t sleep.

“I think there is this innate fear that all of us have about taking the vaccine. And I think I definitely experienced it, and I was like ‘Well, I can at least rationalize that I’m healthy and young and the least likely kind of person to actually be affected negatively by something like this.’ And even if I am, I’m also more likely to be fine in the end if something does happen, ultimately,” Andujar said. “Emotionally it was definitely like a sense of altruism – that I’m doing this not for myself but for people who can’t really …  if they’re immuno-compromised or if there’s some other reason they can’t take the vaccine. It’s the healthy population that has to take it upon itself to shield the vulnerable.”

Andujar underwent a medical screening, and a week later, he was given an initial dose and stayed for a 30-minute observation period. Like flu shots, the vaccine was administered in his upper arm, he said.

“I honestly didn’t feel anything. My family and I went to the arboretum the next day – like I was expecting there to be more sensation, but there wasn’t, which is a good thing,” Andujar said. “It could also mean I was getting a placebo. But that’s part of the science.”

He plans to receive a second dose in three weeks. The trial involves frequent follow-up appointments with increasing time periods in between for a total of 26 months. Andres has to document the process weekly and record any associated symptoms as well as whether or not he gets COVID-19 during the trial. He receives $119 for each visit and $5 for every week he fills out his journal on time.

“All I have to do is fill out a weekly journal of my symptoms, and then if I ever get sick, I have to report it in my little trial journal. It’s like an app.” Andujar said. “I was expecting it to be more rigorous, but it’s really not. It’s just like a bubble. It’s just like ‘I’m good.’”

Andujar documented his experience with the trial on social media to dispel fears about doing trials and taking the vaccine. He screen-recorded his weekly journal entries and posted a vlog recounting his experiences on Instagram, where he answered questions and took photos of each stage.

“In the end, it’s going to be better for everyone if we take that – not entirely miniscule – but that risk, for the good of everyone,” Andujar said. “And if I can take away some of the mystery, then people in universities and my old high school friends will hopefully see my story, see my thoughts on it, and I did it and I’m fine. So that’s my little contribution to global public health.”