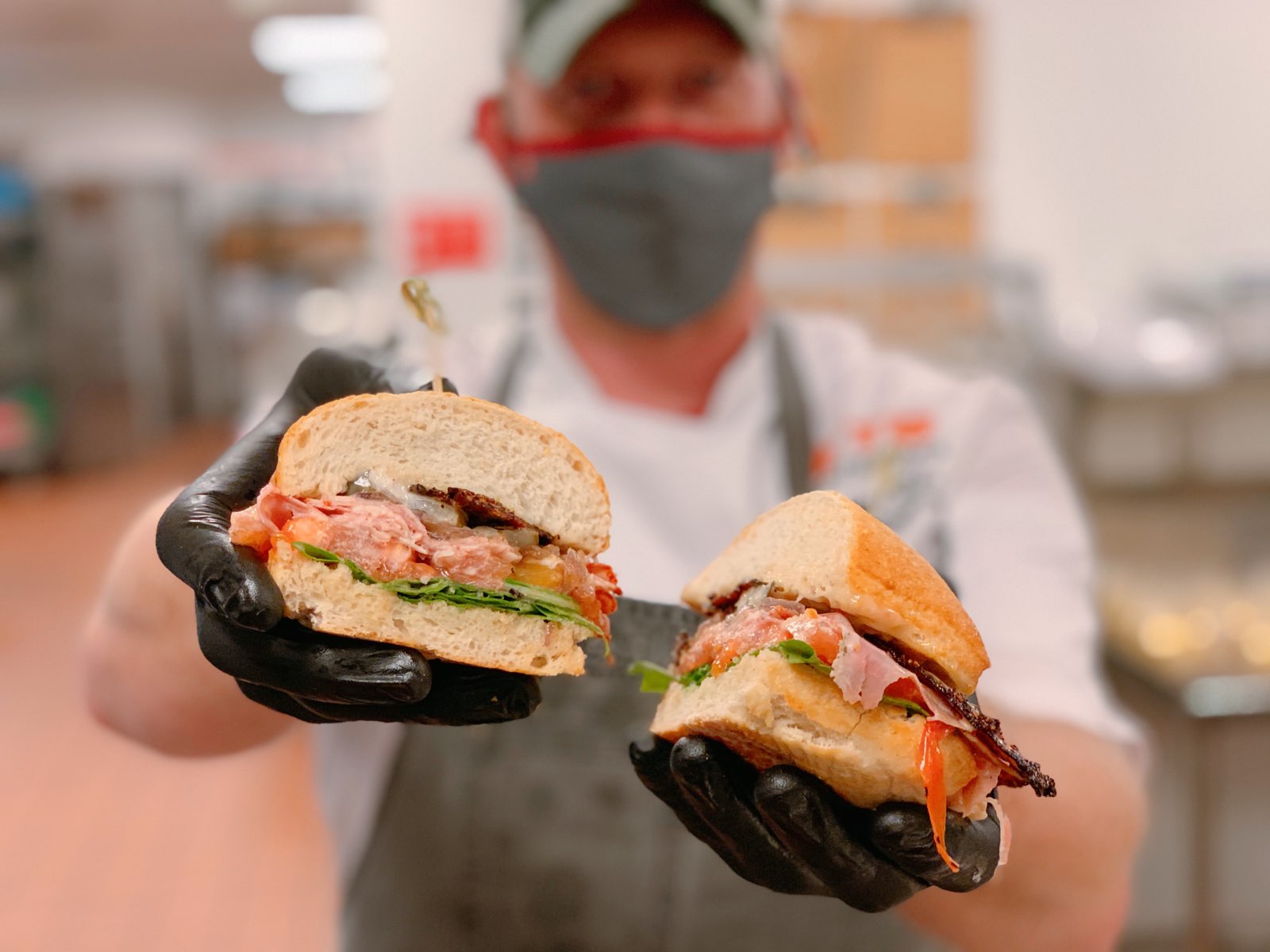 While making sure the UTD dining hall was running smoothly by day, chef Michael Tyler was in the kitchen working on the eighth prototype of his newly created signature sandwich by night.

The “MEATeor” – coined by Tyler alongside UTD Dining staff – is an original sandwich crafted for submission to the third annual Food Management magazine “Best Sandwich in America” contest. Sandwiches will be judged mainly on description and presentation and will be recognized in the newest issue.

“I’ve been loving cooking ever since I worked for a small caterer downtown for about 15 years and learned my way around a kitchen,” Tyler said. “I thought participating in this contest would be fun. I saw that a lot of other people were doing it, and I’m always looking for that next edge and always being able to try to be creative and try to kind of push the boundaries a little bit.”

The sandwich is made with three types of meat – capicola, porchetta and crispy spicy sriracha bacon – and topped with arugula and horseradish pickles, grilled tomatoes, red onion jam and brown sugar aioli (a traditionally mayonnaise-based sauce) on a toasted crusty ciabatta roll.

“I like to kind of express myself with a bunch of different global flavors,” Tyler said. “I’m on a really big kick for doing some Italian stuff right now. I love to do Italian food; I make my own pastas as well. But it’s kind of incorporating a lot of that and I kind of jump around and study different regions here and there. And I like to kind of expose myself to different things and learn new ways to do things.”

The competition was something that Tyler’s peers introduced and pushed him to do. The submissions were due by Sept. 24 and asked for one high-resolution photo, a description including what makes the sandwich special, an ingredients list and when and where it is served.

“They wanted submissions for whatever you could come up with for special occasions, or just to be able to celebrate certain things,” Tyler said. “But as far as my personal sandwich goes, I wanted to experiment and play around with a couple of higher-end pork meats, and incorporate them all into one – make it a little spicy, make it a little sweet and just kind of give it a little bit of an edge that way. I wanted to kind of show the differences in what you can do with one product.”

Tyler said it took him about a week to perfect the sandwich after trying out around two different variations a day. He went through a total of eight or nine iterations before settling on his final choice, with a little help from his coworkers. His sous chef and other members of Chartwells tasted each version and provided input and suggestions on improvements.

“That’s what kind of helps me refine it and get to that final product,” Tyler said. “I got feedback all along the way of the different sandwiches. And I think the final version was just when everybody was like okay, that came out good. That’s essentially what I’m looking for. Everybody was in agreement with it.”

Results have yet to be announced but are expected by late October or early November. Tyler says he is always focusing on his end goal and would be willing to implement his sandwich into his catering menu if presented with the opportunity. Though his sandwich isn’t curated for any special occasion, he still has a vision of the best way to enjoy it.

“The perfect setting to eat my sandwich would be downtown in a park with a glass of wine, on any day that ends in ‘y’,” Tyler said.