Class of 2012 Chris Grider has been in federal custody since Jan. 21 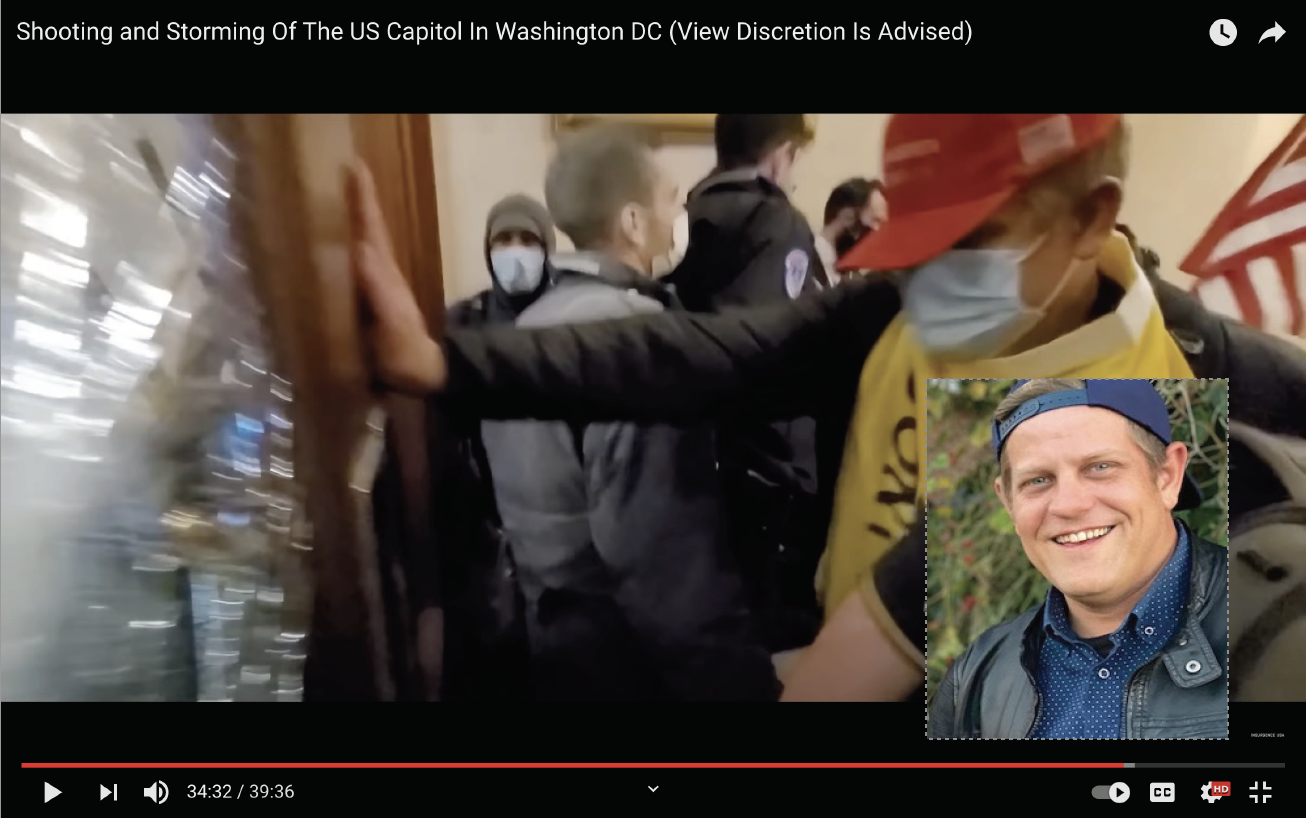 Grider, a yellow ‘Don’t Tread on Me’ flag draped around his neck, was caught on video pushing then kicking a barricaded door leading to the Speaker’s Lobby. (Headshot courtesy of Brent Mayr. Video screenshot courtesy of John Sullivan (YouTube channel: ‘Jayden X’)).

Grider graduated from UTD in 2012 with a master’s degree in fine arts. In 2014, he and his wife opened their own winery – the Kissing Tree Vineyard – in Eddy, Texas. In 2016, Grider even held a wine tasting event at III Forks Steakhouse for UTD alumni in honor of the homecoming season.

Now, in 2021, Grider is currently being charged with multiple counts such as the aiding and abetting of the destruction of government property in the Capitol riot, entering and remaining in a restricted building, disruptive conduct and obstruction of an official proceeding.

Last month, hundreds of individuals gathered around the Capitol in support of Donald Trump, former president of the United States, to protest the result of the 2021 presidential election. While the gathering started as a protest, some participants escalated it into a riot: seizing United States property and forcefully barging into the Capitol building. The aftermath of the attack left five individuals and one police officer dead. Following the riot, the FBI found evidence of links between participants and right-wing extremist organizations such as the Proud Boys.

In an interview with the KWTX news channel, Grider said he wanted to join the event to protest against possible election fraud.

“Maybe it was, maybe it wasn’t, but what troubles me is the ‘nothing to see here attitude,'” Grider said in the interview. “The president asked us to come in support; that’s why I am here.”

Brent Mayr, Chris Grider’s attorney, said Grider hopped on a plane to support Trump after listening to Trump’s speech urging citizens to attend a protest the day of Joe Biden’s announced victory and was unaware of the turbulent events that were to occur on Capital grounds later that day.

“He decided to travel to Washington Wednesday morning with his buddy to be there for what they thought was going to be a peaceful protest to support their president,” Mayr said. “The next thing you know, it becomes violent. It was simply a case of wrong timing.”

Mayr said that Grider realized the protest was turning violent when he saw Ashli Babbitt’s dead body on the floor and knew in that instant that he needed to leave.

“He told media outlets that seeing that dead body on the ground was unbelievable,” Mayr said. “He said he would’ve never imagined it would come to this.”

U.S. Magistrate Susan Hightower is holding Grider under federal custody due to strong evidence showing his active participation in the riots. He has been in custody since his arrest on Jan. 21. The judge refers to an arrest warrant that said Grider aided a man trying to break glass into the Speaker’s Lobby by handing him a black helmet.

Grider was also identified through photos in multiple locations around the Capitol, such as the rotunda and the hallway. He was seen wearing a flag on his chest with the words “Don’t Tread On Me,” a black jacket and a MAGA hat. Additionally, Grider was seen on video directly outside the Speaker’s Lobby, pushing and then kicking the barricaded door.

Mayr said that Grider was just one among the masses and didn’t forcibly break or enter the Capitol. All he did was walk through the doors. Mayr said Grider turned himself in when the FBI issued a federal arrest warrant against him.

“He was not making any efforts to damage property or hurt anyone. He just wanted to be a part of the protest,” Mayr said. “When he learned that they had charged him, he surrendered himself without anyone coming after him.”

Grider’s family and friends, Mayr said, described him in their testimonies as a loving and caring person who helped people of all different community backgrounds. He was an active member of the church, and relatives said that he was dedicated to his business and family.

Michael C. Galdo, assistant U.S. attorney, filed a motion to keep Grider in custody without bond until his trial. Yet, Mayr claims that the evidence uncovered is not enough to determine this case’s potential outcome.

“He is 39 years old. He has never been accused of any violent act. He’s married, a father of three and owns a winery,” Mayr said. “He’s not a member of any right-wing militia; he doesn’t ascribe to QAnon. He was just a Trump supporter.”