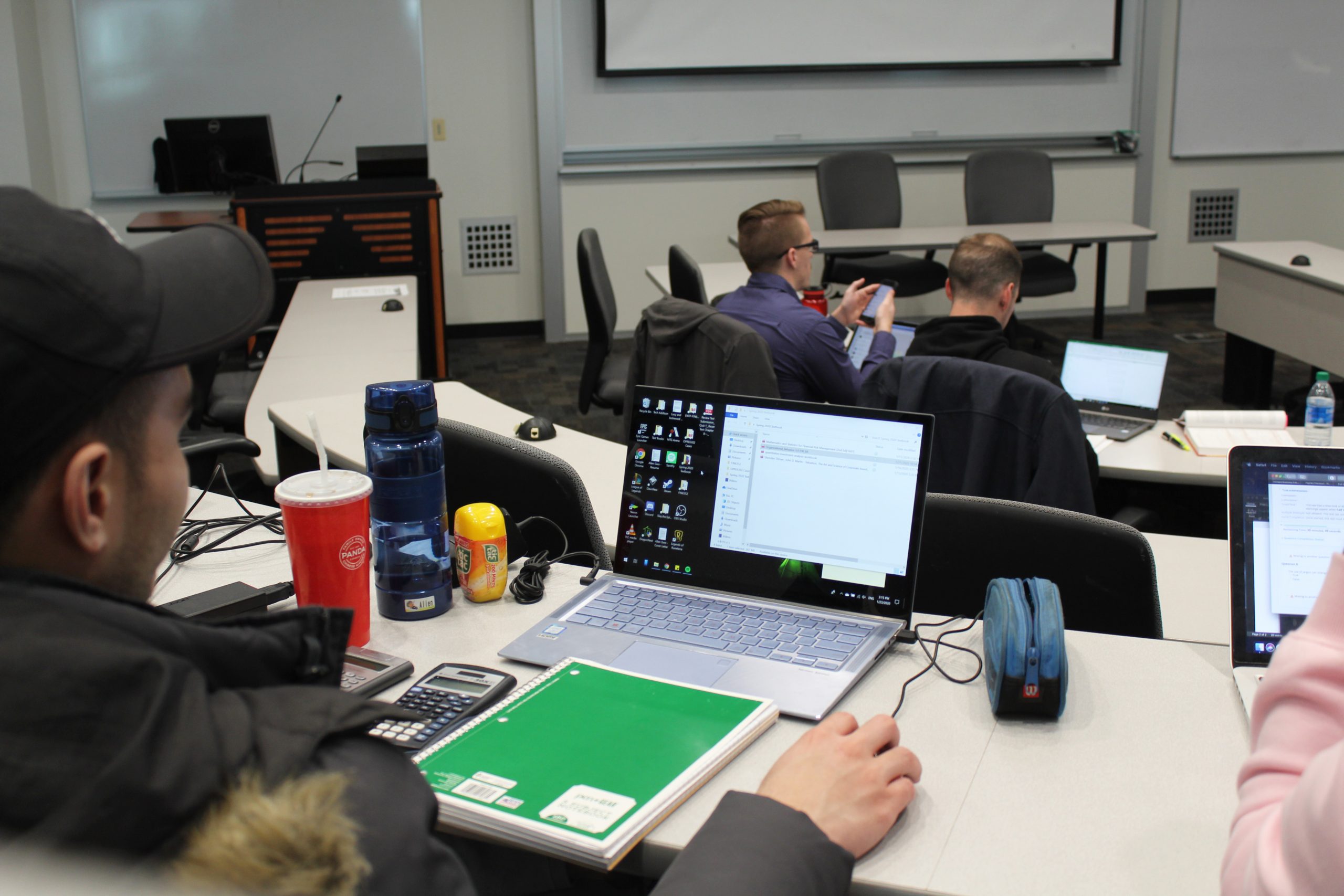 One professor said that the practice of banning tech in class may actually be ableist. Photo by Bhavan Mehta | Mercury Staff

Majority of students surveyed use electronic devices to take notes

Walk into any campus classroom and you’re bound to see seats filled with students and desks filled with laptops or tablets for note-taking. But what happens when professors ban those devices?

For Ameera Fatima, a business administration sophomore, a typical day in class involves pulling up the professor’s PowerPoint on her laptop to follow along with the lecture.

Fatima said that having the PowerPoint on her laptop makes it easier to take notes at her own pace.

“I usually just use (my laptop) for school and stuff, like taking notes from textbooks, PowerPoints. Most of my textbooks are online,” Fatima said. “But my phone is definitely a distraction if it buzzes. Mostly I use it for … texting people, scrolling through social media and stuff.”

While some professors ban laptop usage in their classes, Fatima said that professors should let students have their laptops out.

“Our laptops usually help more than hinder,” Fatima said. “My laptop would … be kept for seeing the PowerPoints up close. But if (they) want our phones on silent or anything like that, or put away, I would get that.”

Aliya Arni, a biology junior and Peer Leader in the UTD Academic Success Coaching Center, said that using technology in class can both help and distract but that it’s more of an enhancement than a distraction.

Karen Huxtable-Jester, a UTD psychology professor and associate director for the Center for Teaching and Learning, said that she used to restrict laptop use in her class, but over time, began allowing and even encouraging laptop use for various class activities.

“I would tell people it’s not the best way to take notes. You’re much better off without that distraction. You’re better off taking notes by hand and thinking about what you’re doing,” Huxtable-Jester said. “But I found that just simply having a flat out ban like that … was ableist, essentially, that I’m discriminating against people with disabilities who maybe need this accommodation.”

Huxtable-Jester said that she noticed that students were often appearing to be distracted by laptop usage, though it was hard to tell simply by looking.

“Somebody can be staring straight ahead and seeming to be very attentive, and they’re not paying attention at all because you can fake it,” Huxtable-Jester said. “Students still will be distracted just as always been the case, even when students used to read newspapers in class. When I was in school… somebody might actually have the newspaper wide open in class in some big lecture hall.”

In a survey of 100 students conducted by ***The Mercury,*** 69.1% of respondents said that they used their smartphone, laptop, or tablet to look up definitions or follow their professor’s PowerPoint. The survey also revealed that 62.9 % of respondents said they use their technology for social media or texting.

43.4% of students said that they use their smartphone, laptop or tablet in three to five class periods per week, and 27.3% rated their distraction level from electronic devices as a two out of five, with one being not distracted at all.

Fatima, meanwhile, said that writing her notes down on a notebook makes her feel like she’s physically retaining the information.

“I tried using my laptop to take notes, but it didn’t work out as well for me because I learned better when I actually write things,” Fatima said. “Personally, I like writing things down.”

Arni said that using either a notebook or laptop to take notes depends on the class.

“I think for some classes when you can follow the professor and kind of condense your notes, then it’s easier to do it on paper,” Arni said. “But I think that if the professor goes really fast, and there’s a lot of information that you need to just strictly memorize for the class, then I think doing it with typing out your notes is just a faster, more efficient way to do it.”

So, is technology usage in class more beneficial than harmful? Huxtable-Jester said that it goes both ways.

“For me, the solution is to be more directive and say, okay, ‘Now’s the time for everybody to close their laptops and devices. We’re all going to watch this video.’ Or ‘Now’s the time to close it because we’re going to have a discussion.’” Huxtable-Jester said. “As opposed to people sort of thinking, ‘I’m going to sit here and work on my laptop while you’re in the background and if you say something interesting, I’ll look up.’”

Arni said that unless the student’s materials are on a laptop, she understands why professors tell students not to go on their devices, but she also thinks that staying focused is the student’s responsibility.

“If the student thinks something is more helpful, or just keeping their laptop on, or whatever just helps them concentrate…then I think that (the professor) should kind of leave it up to the students (to decide) what they want to do,” Arni said. “Because in the end, they’re learning and it’s their grade.”

Huxtable-Jester said that she didn’t want to dictate what students did and that students must resist distractions themselves.

“If I’m in a faculty meeting or in a workshop… I wouldn’t say, you know, ‘You’re not paying attention, put your laptop away,’ because I wouldn’t do that to a colleague. So I wouldn’t do it to a student,” Huxtable-Jester said. “But I might say to all the faculty, ‘Let’s all do this now because this is what we’re here for.’”

Fatima said that students who are getting distracted with tech use should limit their social media time because it takes away from studying time, and Arni said that sitting near a TA or professor may keep a student in check during class.

“That way you know that what’s on your computer, everyone else around you can see,” Arni said. “So that’ll help you be more controlled and not do other things that you don’t want other people to see.”