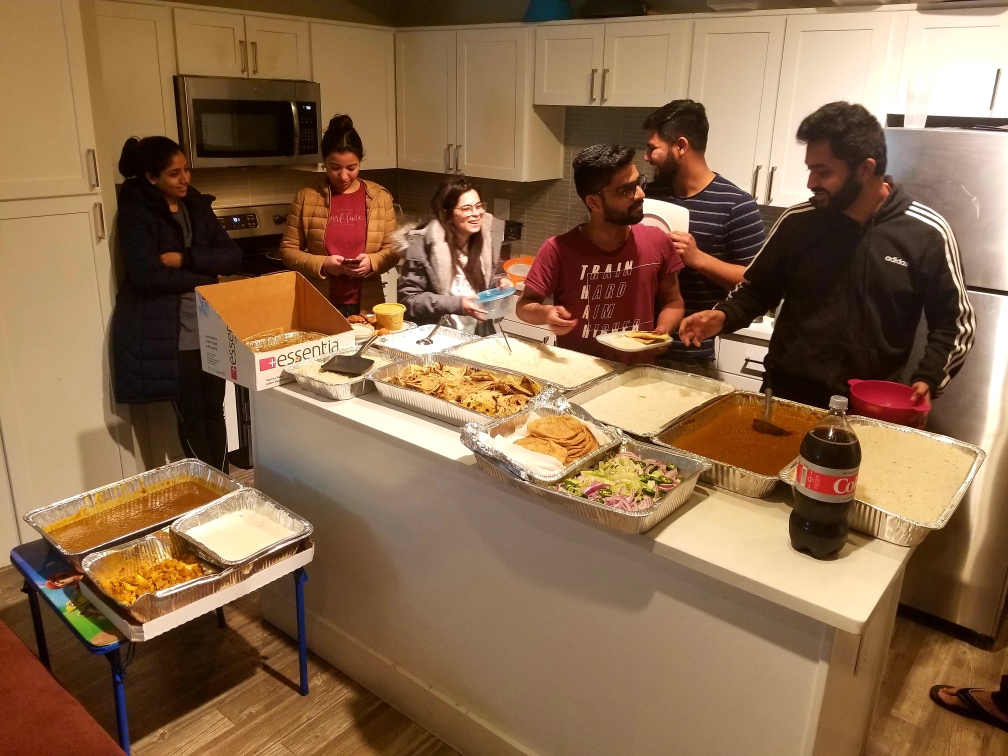 Takesh UTD Food Supply enlists a team of over 30 volunteers to bring food to students. Photo Courtesy of Takesh Sahu

Thirty to 40% of food is wasted in the US, according to the USDA, but a group of UTD alumni is making efforts to reduce local food waste and help hungry students.

Takesh UTD Food Supply is a volunteer organization that redistributes leftover food to international students from South Asia. They take excess food from gurdwaras, Sikh places of worship, as well as Hindu temples, Indian restaurants and social events, and give it to the international students living in apartments near campus.

The volunteer service began in March 2017, when Takesh Sahu, co-founder of the volunteer group, and his four roommates were masters students at UTD. Co-founder Nishanth Rath said they noticed leftover food being trashed while volunteering in the kitchen of a local gurdwara. So, with permission, they filled five to 10 ziplock bags with the leftovers to share with friends.

“In the states, you cannot keep the food stored in a restaurant or public space, you have to make fresh food everyday. We felt bad because back in India, people who used to work in the restaurants used to take (excess) food and give it to their own people,” Rath said.“That instigated this whole thought process.”

Now, more than 30 volunteers make up this organization, Sahu said. To coordinate the various activities, there are three groups, each with different tasks.

“One group provides us the lead, where we get the food donors. Another group handles the operation, basically the logistics, from where to bring (the food) and by what time it should be brought,” Sahu said. “Then once we get the food, we share it with the third group of volunteers, who stay in the different communities where we place the food.”

Communication between the volunteers and food recipients is done through a Whatsapp group with 223 members that rely on the deliveries, core volunteer member Sehjbir Singh Rinthawa said.

“Food is served irrespective of caste, religion and economic status,” Rinthawa said. “It’s basically done to bring equality to the people, so all people can sit together and have food.”

Sahu, who makes close to 10 deliveries per week, said there are a few factors he considers when choosing what food to pick up.

“First, how fresh is the food? Second, from where to pick up? Third from what time should it be picked up?” Sahu said. “Based on if we are available, the time frame and the quantity of food, we will come and get it.”

Next, they decide which apartment complex to serve the food at and notify the group chat. Finally, the food is placed in the apartment of a volunteer from the third group, primarily made up of UTD students living in the various apartment complexes.

Eight to 10 food items are laid out buffet style, and international students in need of food go to the volunteer’s apartment during a specific time and serve themselves. Food from the gurdwara includes rice, dahl, which is made of slow cooked lentils, roti, a type of flatbread,  and sabji, a vegetable curry. However, they have served other food as well. Sahu and his volunteers taste the food to ensure it’s safe.

“We accept all kinds of food. The only condition is the food should be very fresh. It shouldn’t be two days old or stale food,” Sahu said. “There is no restriction on how much students can have. They can simply take whatever they want.”

One initial challenge was transportation as the group didn’t have a car. Instead they used ZipCars, Uber or the local metro train. Then in May 2017, when the volunteer service picked up steam, Sahu and his friends bought a car together.

“To help the student community, we decided to get a car, and after that it was kind of flawless,” Sahu said. “When (South Asian international) students come here, the US, for the first time, the Indian Student Association helps us find accommodation,” Sahu said. “But when it comes to food, (the students) have no idea where to go to get food, how to order, they don’t even have phone connection initially. We used to provide whatever we could.”

Juggling their course work and making deliveries was difficult as masters students, Rath said, but once they restructured and created time in their schedules it became easier.

The main obstacle is logistics, Sahu said. Most of the logistics volunteers, who are UTD alumni, have full time jobs, making weekday deliveries difficult.

“We have enough food, we have demand as well, but to bridge the gap between these two is very crucial for us and we have been struggling,” Sahu said. “The scale has increased on both the sides. Students expect (food) every weekend or every day. Unfortunately, we are not able to provide that service. For 2020, our goal is to bridge this gap, streamline everything and define the responsibilities.”

“We have come far, and are very fortunate we have really good support from the student community, from the volunteers, and from the DFW area,” Sahu said. “Service is not important, the important thing is in what way can we help to improve this society, the surroundings, the world. Even a small contribution is helpful.”