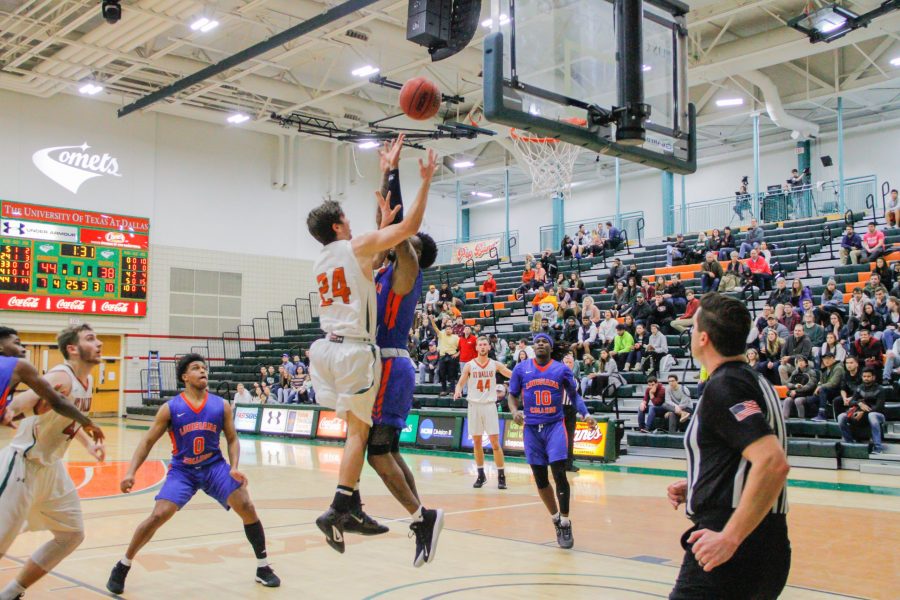 With the final blare of the buzzer going off, men’s basketball faced a tight loss to  Sul Ross.  Despite the 68-65 loss, UTD still has a chance of securing a top four spot in the American Southwest Conference.

The men’s basketball team currently has a conference record of 6-2, and with eight games left before ASC Championships, the Comets have a fair shot of improving on last year’s conference record of 13-3. The team ended its opening games with an overall record of 5-4 before the players hit their stride in the UTD Classic, securing two wins in the tournament, then winning the next two games as well. The team went on to secure three more wins against Letourneau, Belhaven and Louisiana College with only one loss in between until their latest defeat against Sul Ross State.

Last season, the team earned the title of conference champs and not a single player has graduated since that victory, so the lofty goal of defending that title once again this year seems achievable, head coach Terry Butterfield said.

“I think that the outlook among our players is very optimistic,” Butterfield said. “We’ve learned to plug holes where there have been holes. Our preparation and intensity (have) been good. I think going forward, we’re in this thing, and we will continue to be in this thing.”

That being said, this season still has had its ups and downs. The team has had to handle extended absences from four key players — like senior guard Curtis Allen — due to injuries. In spite of this setback, the team has tried to adapt accordingly and keep its chances of winning high.

“All of the credit has to be given to the players because they’re keenly aware that we’re missing some pieces,” Butterfield said. “And they’re aware that we’re missing some impact(ful) guys. But they really haven’t let them slow them down to a large degree. Guys that have returned to the team this year have grown as players (and) are doing more to close the gaps for those guys that aren’t there.”

With all the growth they have undergone this season, these players are high quality, Butterfield said. This standard, however, is not just limited to the court. These players are also very successful in the classroom.

“It’s very difficult to find guys playing basketball that can meet the academic criteria,” Butterfield said. “But… because I get such high level kid(s), they’re really smart and they’re very driven and they have excellent priorities. I feel very fortunate to be able to coach kids like that.”

In addition to having a major offensive role, senior forward/center Hans Burwitz serves as a leader on the team and tries to connect with each player, Burwitz said.

“The best part about our team is the guys,” Burwitz said. “We have a close connection and we always know how to mess with each other but not take it too far.”

Burwitz has been playing with UTD for the past three years, and during his time here he said he has grown as a person.

“UTD, with academics and basketball, really pushes you harder than most places, and it makes you a lot better for it,” Burwitz said.

People like these seniors are not only good players, but also have personalities that are very conducive to a strong team representation, Butterfield said.

“When I got here, I didn’t think I would be here very long,” Butterfield said. “I thought maybe three to five years tops — I’m an east coast guy and spend all of my time on the east coast basically. Twenty years later, here I am. I stay because I get to work with a really high-level, high-character type of kid, and I love that.”

Although basketball is the common factor that initially brought these players together, Butterfield said their relationship has become much more than that.

“The basketball stuff is a whole lot of fun, but it’s those sorts of things that last forever,” he said. “The connections, the friendships, the relationships, the times that we had together, and watching (them) evolve into grown men, to me, you can’t put a price tag on that.”