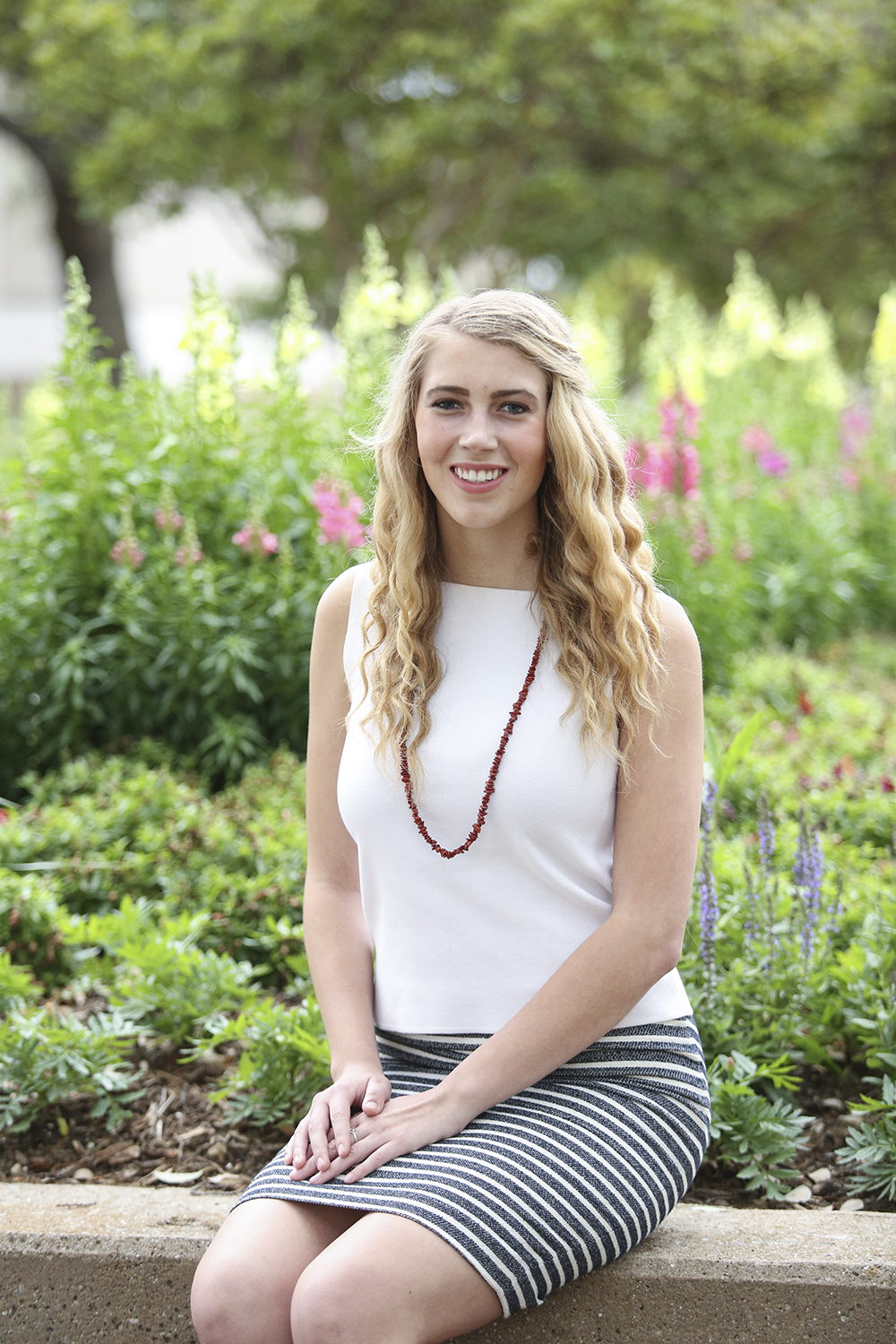 Yang Xi| Staff Political science sophomore Nancy Fairbank has been working with homeless teens ever since a high school project introduced her to the issue. Her book, “Throw Away Youth...”, is due to be published in May.
Archives
Life & Arts

Nancy Fairbank sat in a dimly lit, narrow room on a solitary couch with a homeless teenager.

She was interviewing them for a school project, but this encounter inspired her to do more to raise awareness on teenage homelessness.

A political science sophomore and current Student Government vice president, Fairbank is now working on a book called “Throw Away Youth: Stories of Springfield’s Homeless Teens” to bring attention to the issue. It is due to be published in May.

During her junior year of high school, Fairbank filmed a short documentary for her broadcast journalism class on The Rare Breed — a local drop-in needs center for homeless teens in Springfield, Mo., Fairbank’s hometown.

By conducting interviews, Fairbank learned that The Rare Breed offered transitional living programs, where participants would be assigned apartments and different levels of assistance to try and help them get back on their own feet. Fairbank talked personally to homeless teens and learned about the reasons behind their struggle.

“My first emotion was shock,” Fairbank said. “Every stereotype about homeless people was being broken down by these stories and they were just good kids in bad situations.”

Loni Brewer, program director for The Rare Breed, used the short documentary as a promotional tool to spread awareness about the issue and posted it on the center’s website.

Even though the video helped, Fairbank still wanted to do more about the issue.

“I knew that more awareness work needed to be done,” she said. “I didn’t understand why we weren’t up in arms as a community about the fact that we have 13 year olds sleeping on the streets.”

Fairbank started by creating a volunteer program through her high school, Central High, called Teen to Teen. Students who were involved clocked a total of 600 hours of service at The Rare Breed and raised a few thousand dollars in donation.

Volunteers also hosted a talent show production and art auction at the high school. The money raised at the auction was used to help create a scholarship for teens at the shelter.

“Unfortunately, after I left Central there were a new group of officers in charge and they didn’t really put a lot into it,” Fairbank said. “It went very well for about a year until I was there but then dropped off after that.”

Apart from starting this volunteer initiative, Fairbank also began to work on a project of her own in 2012 to raise awareness about the issue.

“So the stereotypes are all like they’re drug addicts, they’re bad kids, they just don’t want to listen to their parents, and I really wanted to address these misconceptions,” Fairbanks said. “A lack of awareness was also a huge problem; there weren’t enough resources for these teens. It’s often called the invisible problem because when you see a teenager on the street you’re not going to assume they’re homeless, while adult homelessness in comparison is very visceral, very visual.”

Fairbank began to work on a book that highlighted the different policies that could be changed and what people could do to alleviate teen homelessness. She approached local and national publishing companies while still in Springfield, but they didn’t accept her manuscript because she didn’t have the credentials to present it in an analytical framework.

One day, Fairbank spoke at the local rotary club in Springfield about the issue and caught the attention of James Baumlin, a creative nonfiction professor at Missouri State University and the editor of Moon City Press.

It took more than a year of working together in an independent study setting and giving criticism for Fairbank to submit a revision that was at a professional level, Baumlin said.

“She never questioned any advice,” Baumlin said. “She sees the dignity in all people and knows how to talk to everyone. She treats a professional and a homeless teen the same way — with respect.”

He agreed to publish her work and guided her in presenting the book from a narrative standpoint, which was achieved by transcribing the       interviews of eight homeless teens where they shared their stories.

“She is a natural born debater and I had to turn her into a storyteller,” Baumlin said. “She was capable of telling the stories of homeless teens in a way that gave a human face to them, and that is a quality of a professional writer.”

The book was accepted for publication in December 2014 through The College of Arts and Letters at Missouri State University. Any profits the book garners will go to The Rare Breed.

Laurene Heybach and Patricia Nix-Hodes from The Law Project of the Chicago Coalition for the Homeless will be writing the introduction. They were involved with the passing of the McKinney-Vento Act, the first federal law that addressed homelessness.

“It’s amazing to have them on board because they’re going to help bring the book from being about Springfield, Missouri to showing that this is a national issue,” Fairbank said.

While Fairbank was working on the book, she found other ways to get involved.

Carol Cirulli Lanham, the assistant dean of undergraduate studies at the School of Economic, Political and Policy Sciences, invited Fairbank to participate in a research seminar during the summer of 2014 to create a drug and alcohol awareness and intervention program for homeless teens in the Dallas Independent School District.

Fairbank’s work within this project centered on researching a subset population within the larger homeless population based on what drugs they’re using and why. She referred to literature from past studies and incorporated the interviews she’d conducted for the book to conclude that homeless teens were using drugs for two reasons: either as a form of escapism or because drug use was normalized in their households before the teens ran away.

Fairbank and two other students evaluated the benefits of the current programs focused on drug and alcohol awareness and intervention. They chose a program based on the “Free Talk” model that had a college readiness component.

The program designed by the research seminar was pilot tested at Patton Academic Center this last semester and is still active. School administrators want the program to be taught to another group of students, but details are still being sorted out, Lanham said.

The class is a smaller version of the college class Lanham teaches on the effects of drugs and alcohol on society. The students are surveyed for potential problems with substance use. Group interviews are conducted and participation is required.

The group of student researchers presented at the Southern Sociological Society’s annual conference in March in New Orleans.

Lanham said she was very proud to have worked with Fairbank. 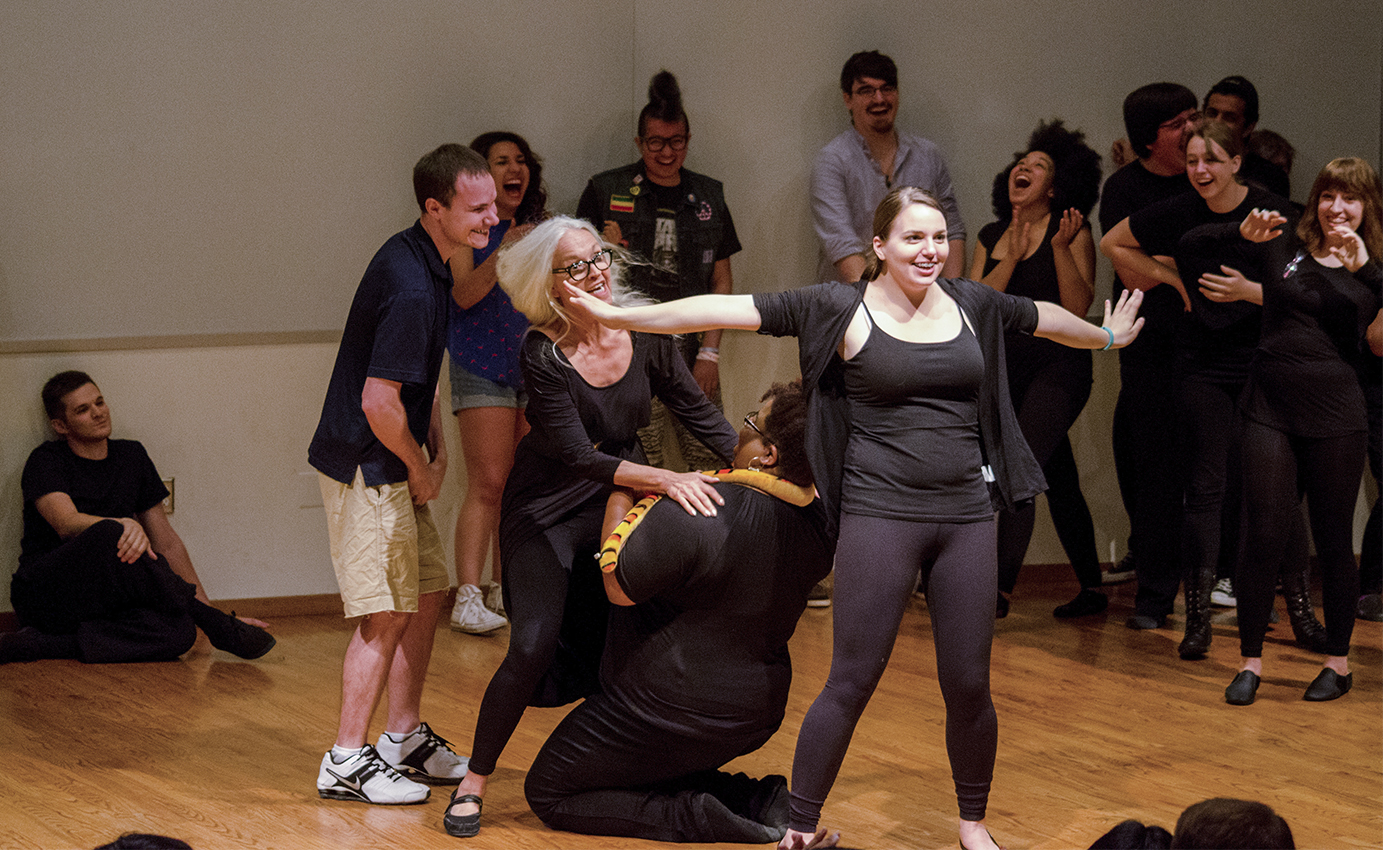