Spending a day in the heartbeat of UTD

Observations from 24 hours outside the Student Union 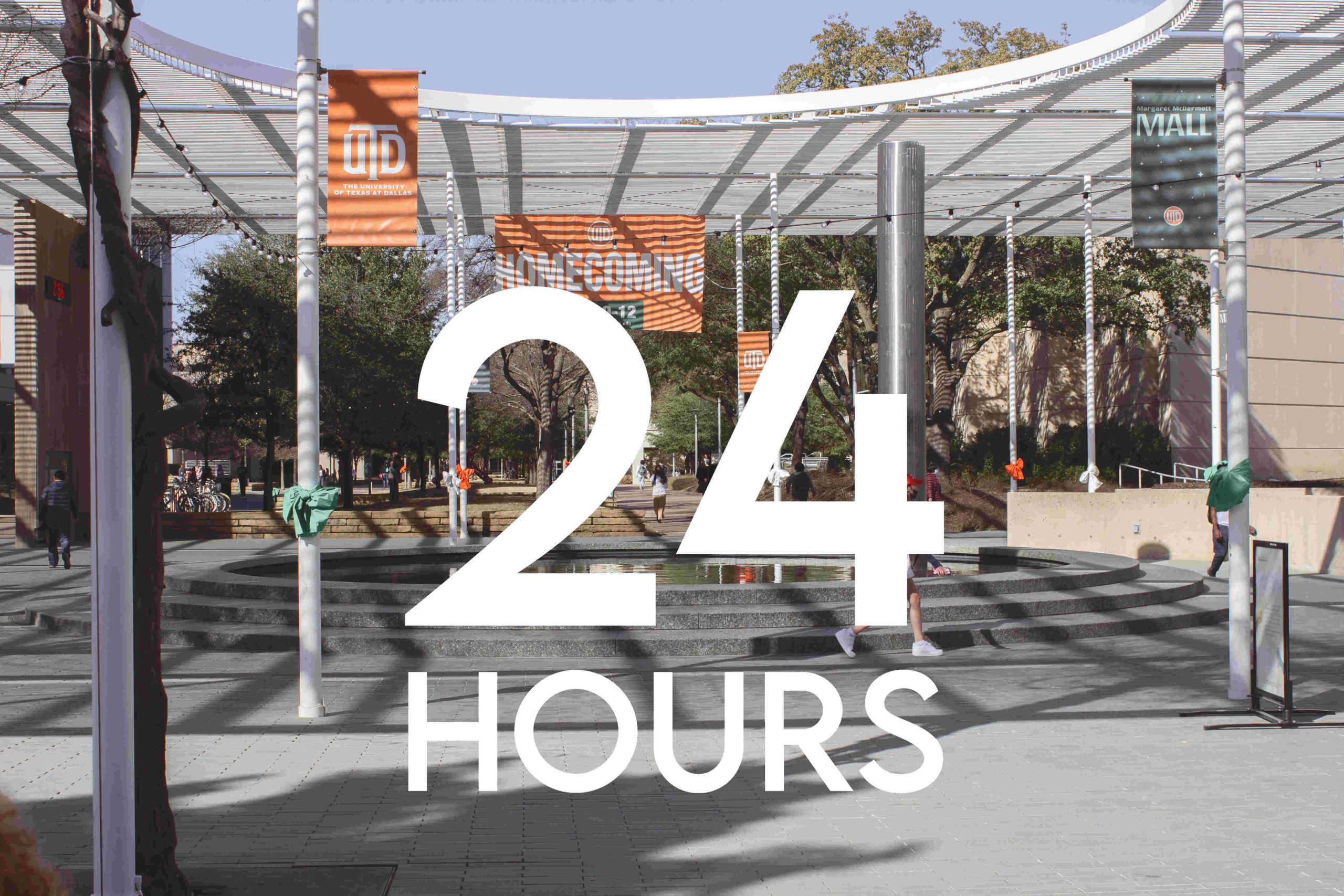 As the clock struck midnight on Friday, Feb. 11, I settled on a rock by the Memorial Pond with a simple sign: “Mercury Marathon – 24 Hours on the Plinth!” And what a 24 hours it was.

Let’s set some ground rules: the 24 hours last 12:00 a.m. Friday to 12:00 a.m. Saturday. They are outside, on the Plinth, in front of the Memorial Pool. I get three bathroom breaks. If any of you feel like getting smart about the breaks, you are welcome to try consuming that much Bang Energy while listening to constant fountain sound effects.

The day’s skateboard tally began at 12:12 a.m., when a single skater coffined down the hill by Starbucks at top speed. The occasional thunder of boards on brick and the burble of the Memorial Pool fountains behind me were the only sound around at that hour.

Until a jogger at 2:17 a.m., that is—a jogger who must have completely lost his mind, because it’s 46 degrees out and he’s in shorts. Pot and kettle, with how I’ve decided to spend a full day wrapped in an owl-patterned fleece blanket, but at least I’m not doing cardio.

Thomas Nazarro, a human resources junior returning from his friend group’s game night, walked up at 3:23 a.m. to investigate our cutting-edge journalistic experiment.

Then, he spotted the Mercury reporters with a blanket and a Twitch livestream.

“I just walked by and saw some people looking like homeless people sitting by the Plinth, and I was like, ‘hey!’” he said. “They had Temoc colors, so I was like, ‘they can’t be that harmful.’ Temoc has benevolent energy.”

We waved him on his way, warned him not to approach any more suspicious strangers and went back to counting boards.

“Are you guys genuinely going to be sitting here for 24 hours?”

The first Tobors of the day were released at 7:02 a.m.! I watched the army march forward in an orderly line…until one paused to contemplate existence, forcing all others to recalculate around it. Typical group project member behavior.

Two minutes later, it was still pondering in front of the TechKnowlegy Bar. One friend stayed behind for a while to watch it approach sentience. Eventually, however, duty called, and the thinker was left alone. A few more minutes, and it powered down entirely, with no one there to help. I felt like a nature documentarian watching a wolf starve to death because of a non-interference policy. Good night, sweet prince.

At 7:31 a.m., it woke up only to run straight into a pole. Are we here just to suffer? Thank goodness for the Tobor rescue guy—even if his method of unhinging the Tobor’s jaw like a snake to roll it away is a little unsettling.

The window between 8:00 and 9:00 a.m. featured a steady trickle of people heading to morning lectures, mostly yawning and clutching steaming cups of coffee or tea. A single sprinter came through just after nine looking absolutely panicked on the way to a lecture…I hope that worked out for him.

At 11:05 a.m. a squirrel considered squaring up to the livestream camera. I contemplated how big of a rabies shot this article was worth, but it lost courage and fled before I had to make any big decisions. We may never know.

A group of small children descends on the Plinth, one chanting apropos of nothing: “We were here first!” I did not correct his mistake—partly because I could not feel my fingers. A man started skimming leaves out of the Memorial Pool, a calming sound effect that helped soothe the obligatory Bang jitters. I reconsidered the life choices that led me here several times.

Christine Veras, an assistant professor in ATEC, chatted with us about adjusting to an in-person semester on the way back from her morning seminar.

While COVID-19 brings an element of uncertainty and concern for the semester, Veras is enjoying seeing students in the classroom.

“I was kind of reluctant, but I think now after being in-person, and talking to students, and seeing the dynamic…it is much better,” she said. “I’m excited. I just hope everybody will be considerate to one another and keep wearing masks.”

After her departure, a tour group came through, reminding me how extraordinarily small high school students are. There’s no way we were ever that short, right?

The group guide teaches them that the Plinth Fountain is called the “Fog Log,” a name that kicks off my second sidequest of the day: asking everyone who comes through what their name for it is.

Thankfully, it had warmed up a bit by the time the midway point of our journey arrived. Senior Ben Wise, double-majoring in public affairs and visual and performing arts, kicked off the afternoon portion with his take on changing campus life.

“It’s so nice to see people. It’s been a little weird, because of that whole experience of being basically alone on campus, but it’s just really nice to be walking to class and see someone you know and you can actually say hi to them,” he said.

Living on campus during the online-only semesters, Wise got used to biking around empty streets and construction sites.

As he mentioned it, another group came around the corner. They continued to spread the “Fog Log” propaganda.

1:18 p.m. brought a 1935 Wheat Penny buried in the black gravel by the Memorial Pool. Perhaps it was a ghost’s message to stop, but I would not be deterred. Unfortunately, it also brought biology senior Lane Hughes and computer science junior Willie Chalmers, who insisted on T-posing in front of the Twitch stream. They did so as slowly as possible once told it would be used to create a time-lapse video.

Once they tired of the T-pose terrorism, we talked about that weekend’s Homecoming festivities—the dining options in particular.

“I think the food back in Fall 2019 when they last did this was Chartwells-provided, so…make of that as you will,” Chalmers said. “They got separate food truck vendors this year, so that’s where we’ll be going.”

They did so. The curse left behind by their T-posing was dispelled by the appearance of a small dog in a smaller sweater at 1:45 p.m. His name was Toast, which was critical.

Campus was much livelier in the afternoon, with many people stopping by to chat about campus life and classes in a time of COVID-19. The Plinth grew busy enough to warrant UTD PD Chief Larry Zacharias watching over the crowd, enjoying a semester with the most student activity he’d seen in two years.

“The officers that we have working here really enjoy the student interaction,” Zacharias said. “During COVID, everything that made our job fun no longer existed, so that was pretty hard on everybody…we’re all glad Feb. 7 [the start of in-person coursework] finally got here.”

As the afternoon wore on and we spoke to more and more people, the variation throughout UTD in academic interests, culture and campus involvement shone through. No two students had the same story- and not just about the Plinth Fountain’s true name. Consistently, however, the answer to any kind of “favorite things” question came back to the diversity of UTD’s student body.

Sahithi Chundu, a mechanical engineering and economics freshman, attributed her positive experience at UTD to its unique students.

“There’s a lot of college campuses where there’s like a spectrum from ‘nobody cares about anything at all’ versus ‘people are extremely individualistic and prideful’, and I feel like UTD is a nice medium,” she said. “We have people that are passionate about what they do, but we also have people that are kind.”

It wasn’t just Comet culture that had made her first year a positive one; Chundu was also happy with the University’s overall performance.

Something new for this reporter: we hit 69 skateboards exactly as the clock struck 4:20 p.m. Seriously. I have a witness. If you bombed the Starbucks hill on a longboard that Friday, you are a national hero.

At 7:03 p.m. sharp, the Tobors began their slow parade back to their stations. One by one, they roll in, much like the steady growth of people that joined me in my vigil.

My collection of squatters came in handy when we’re surprised by a large group of people in unfamiliar uniforms at 9:28 p.m. One of them goes to investigate and discovers that UCLA is here for a dance competition. This is on-the-scene reporting in action.

By 9:54 p.m., 22 hours into the marathon, I had to give in to the intrusive thought and send someone to ask if the person manning the Techknowlegy Bar could be called a “bartecher.” Sadly, that is not yet their official job title.

The crowds had all passed by that time. Only a few groups came through at a time, but they were surely interesting ones. On one side, a couple is dancing to the Plinth music, laughing along to the pop-synth beat; across the way, someone reminds a friend to keep their phone charged before leaving for the night. It occurred to me that the root of humanity is love. Then, I realized my hands were cold again, so never mind all that.

It takes until 11:30 p.m. for the final Tobor to roll back to the Student Union. Our ragtag crew saluted, singing a very garbled version of the national anthem, and I recalled something our afternoon photographer said about sleep deprivation having a similar effect on brain function as alcohol.

Impairment aside, the group stayed together until the final toll of midnight, lending even greater credence to the shared sentiment of that day’s interviews: it’s the people that make the experience, here—students coming from vastly different backgrounds to work together as a whole.

And what a work it was! The final skateboard tally was 144 even, notwithstanding five roller-skaters, eight scooters, two hoverboards and a single mysterious unicycle that I’d love to track down once I can feel my hands again.

My 24 hours on the Plinth gave me a new appreciation for the University as a whole, but particularly the people who go here. Maybe it’s just the mere exposure effect of watching it for this long. Maybe it’s the actual exposure of freezing outside. Either way, I know that something has shifted on campus, something that goes far beyond a single day.

Not the Plinth Fountain name, though; the jury’s still out on that one.