How virtual relationships have flourished during the pandemic 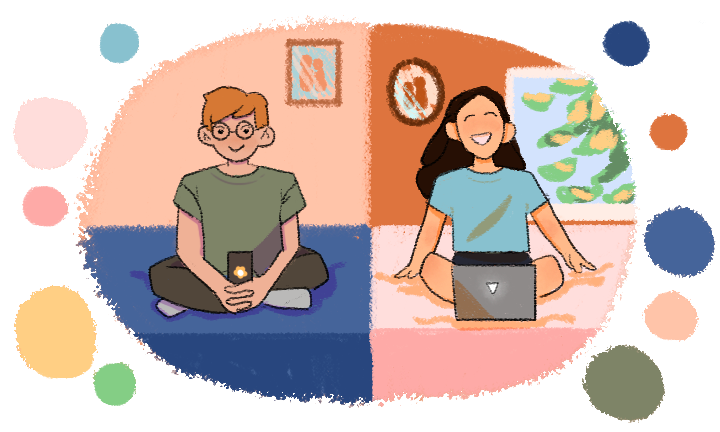 Regardless of whether a couple lives in the same city or on opposite sides of the world, nearly all communication is now virtual. Pavan Govu, a computer science senior, has been in a mostly virtual relationship for a little over a year.

“The way we contact has kind of evolved over the year,” Govu said. “At first, we really began mainly through Snapchat, and then we would occasionally text each other. As it stands now, almost exclusively FaceTime.”

One quirk of the pandemic, said psychology professor Regina Ybarra, is that unless a couple is living together, the relationship can feel long-distance.

“The biggest thing that keeps long-distance relationships going is being able to communicate,” Ybarra said. “The entire relationship exists in what we can communicate with one another because we don’t necessarily get to do stuff together, and you don’t get to experience the person in how they’re doing things.”

Karen Prager, a professor of relationships and intimacy, said that virtual communication now plays a large role in relationship maintenance.

“Now with Skype and Zoom and other kinds of communication, people can connect so much more vividly than we’ve ever been able to do before,” Prager said. “I know it’s been a whole year, which can be forever in a short relationship, but I would like to think that couples could keep something going through these platforms.”

However, there are still a host of other problems for couples to consider – including lack of physical touch.

“I would just argue for lots of Skyping, FaceTiming and all of that. Trying to stay in touch as much as you can, but you are bound to feel affection and sex-starved,” Prager said. “Deprivation is the name of the game under these conditions.”

Even though Govu and his girlfriend are within relatively short driving distance, Govu was only able to meet up with her for a couple days throughout the whole year. This lack of physical presence has been a challenge, Govu said.

“If she’s ever feeling sad or if she’s feeling pained about something, comforting her is just so hard because I have to do it entirely through words when a hug speaks a million words. Sometimes that’s all that’s necessary to make someone feel better,” Govu said. “But hey, I can’t hug someone through a phone screen. There’s only so much I can do.”

The lack of traditional interaction has also limited relationship development, especially when a relationship can only grow through deepening emotional connection. However, Ybarra said, this could be a good thing.

“Relationships don’t jump as fast; you really get to know the person before we ever make that leap to be in-person,” Ybarra said. “With traditional long-distance relationships, it just means we need to make the commitment of the time and money to be able to travel somewhere. Now, I need to take a risk and a leap of faith to interact with you in some sort of way. So before people choose to do that, there’s that kind of buildup of that trust in the relationship that has to happen.”

Govu said that while long-distance relationships often get labeled as impossible, heading in with a positive mindset is key.

“Understand that there are certain parts that make long-distance tricky, but there are good parts to it too,” Goyu said. “It just really comes down to communication and working with each other to find a system and being understanding that there’s no really easy way to do this.”