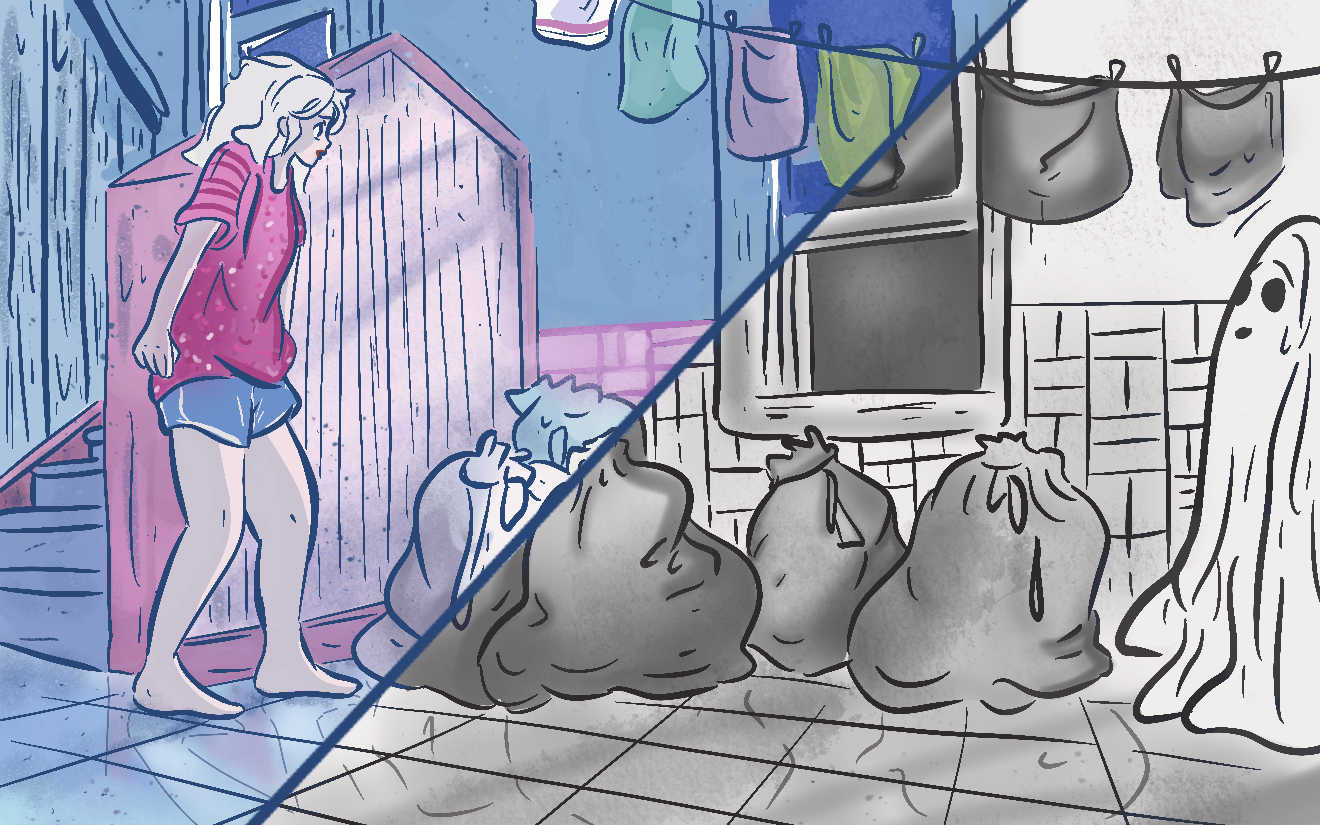 With an inviting pastel color palette and soft art style, Brenna Thummler tells two intertwined coming-of-age stories that capture both middle school’s mucky feelings of awareness and the challenges of facing problems that are bigger than oneself.

Our first main character, Marjorie Glatt, is a middle school student in charge of the family laundry business. But she’s also yearning for the comfort of her recently-deceased mom, responsible for a younger brother and has a dad that is going through a depressive episode…leaving Marjorie feeling like a ghost. By contrast, the second main character, Wendell, actually is a ghost, and not an invisible spectre either: he is a stereotypical, bedsheet-wearing ghost.

Having died young, Wendell’s routine consists of awkward group “death therapy”, neglecting the upkeep of his sheet-covered body and coping with his insatiable desire to return to the human world. As Wendell and Marjorie each pursue their individual objectives, their paths collide, and it is ultimately revealed that Wendell’s journey of reinvention is actually the source of many of Marjorie’s problems.

What sets “Sheets”apart is the subtle complexity that Thummler imbues into all of her characters—even the antagonistic ones. There is always a reason or motive behind a character’s actions, making “Sheets” an intricate story that revolves around more than just its two main characters.

Thummler’s attention to detail in storytelling goes beyond just her writing, though. Throughout the comic, her artwork is positively gorgeous – but she also takes the time to do something interesting with the comic’s color palette. When Marjorie is the focus of the story, everything is drawn in vibrant color; however, when it is from Wendell’s perspective, everything is in dreary black and white.

Like other stories that heal someone’s inner child or validate hardships, “Sheets” gives resolution to those uncomfortable middle school years. With an inviting art style, compelling story and complex character-work, Brenna Thummler is able to create a work that unexpectedly touches you – and might just become your new favorite story. So, while you might not be actively looking for something that will take you back to thea time of mixed feelings that are our early teen years, the beautiful rollercoaster ride that “Sheets” takes you on is well worth that unwanted blast from the past.