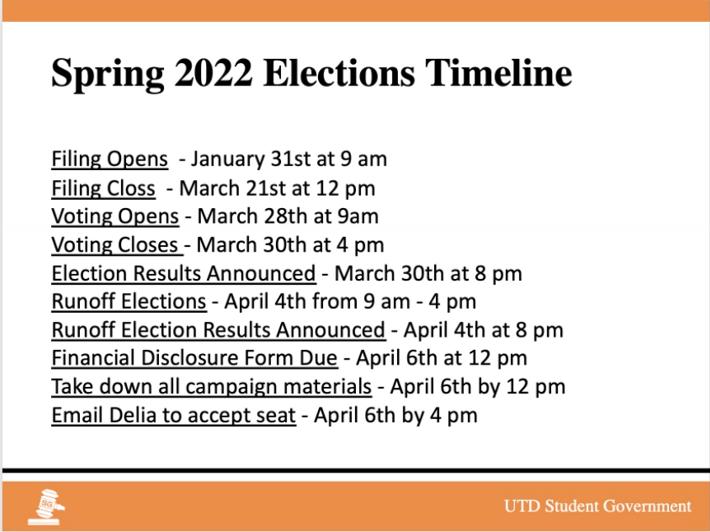 To accommodate UTD’s large gaming community, the Student Affairs Office and the Student Union are tentatively planning to expand and renovate the Pub into an Esports Lounge. Student Affairs is hosting an open forum on Feb. 9 and Feb. 10 at 3 p.m. and 12 p.m.respectively to gauge student interest and solicit feedback for this Lounge. The forums will be located in the SSA Auditorium, with virtual attendence options taking place over Microsoft Teams. Vice President of Student Affairs Gene Fitch said his office is particularly interested in getting feedback on dining options for the gaming facility.

Homecoming will take place on campus from Feb. 9 – 12, and will include a Flag Parade, Chalk Art contest, Lawrence concert, basketball games and the annual Homecoming parade among other events. Comets can find a full list of events and their times on the 2022 Homecoming website.

SG will host Homecoming court elections and a vote to amend SG’s governing documents from Monday Feb. 7 to Friday Feb. 11. For the latter election, Students will get to vote for or against changing SG’s GPA requirement from a 3.000 to requiring ”academic good standing” with the University, which is currently a 2.00 for undergraduate students and 3.00 for graduate. SG will email students the election forms at the beginning of Homecoming week.

The Green Initiative Committee’s Single-Use Plastic Ban proposal passed through the Academic Senate and Staff Council on Jan. 19. As the proposal’s name suggests, the Ban aims to eliminate non-essential, non-compostable single-use plastics such as plastic straws and plastic bags from campus. A Plastic-FreeTask Force – whose members and affiliated departments will be determined over the next month – will strive to carry out the Ban’s goal.