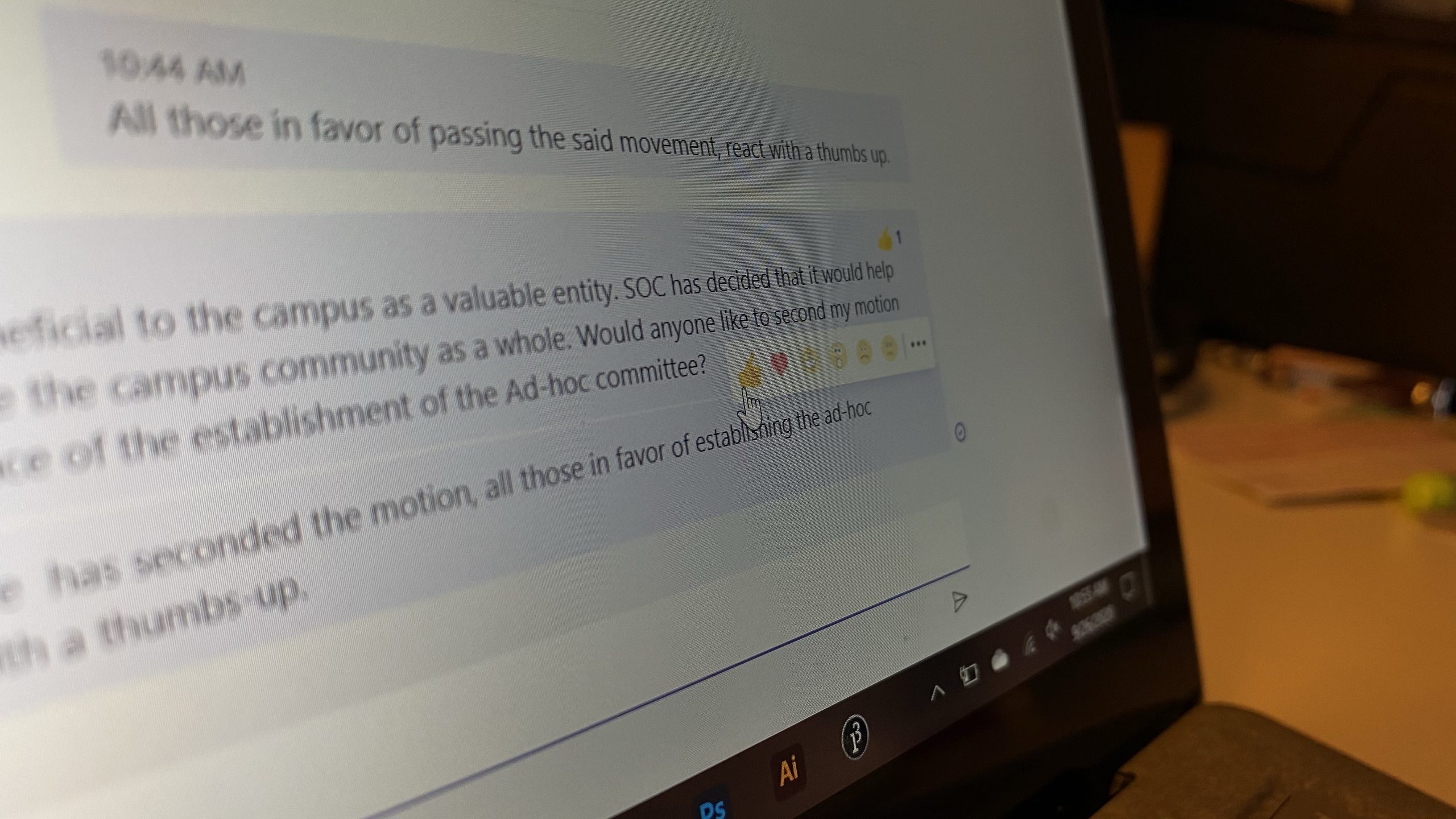 Some senators said that using Teams reactions to vote was a mishandling of voting procedure.

Student Government senators have voted to amend Article V of the SG bylaws and establish a new ad-hoc committee focused on diversity and equity. The amendment passed by one vote.

Voting took place at the Sept. 22 senate meeting, via Microsoft Teams. With this being their second virtual meeting of the academic year, the senate used Teams reactions to vote on the amendment. According to SG bylaws, a two-thirds majority vote is required to pass these amendments. And with 61 elected senators, 41 people needed to vote in favor – which they did. However, said SG president and finance and economics senior Sara Brennan, not everyone voted.

“In person you can see everybody and make sure that everyone gets their vote counted, but virtually it’s like a little more difficult to make sure,” Brennan said. “I think that’s part of the reason why it was such a close margin.”

Rutendo Chando, history sophomore and recently elected SG vice president, proposed the idea of the committee to the senate. Racial equity and diversity were a large part of Brennan’s and Chando’s election platform.

The goals of the committee, said Chando, include helping students get mentoring, setting up a Ko-fi fund and getting students more information to learn about diversity and equity on campus – in addition to figuring out the diversity of scholarship programs like AES and McDermott scholars. Additional details about the power and responsibilities of the committee can be found on SG’s Instagram.

Chando also said that a lot of students feel like they’re being underrepresented. While SG hasn’t done any initial surveys to confirm this, Chando said she is basing this idea of off the comparatively low numbers of Latinx, Black, Native American and Pacific Islander students.

“You don’t necessarily need to go out and ask people. You can still tell that they’re feeling alienated, because I myself and other students have felt alienated in classes when they’re the only black person or the only Latinx person in that class,” Chando said. “They do feel like they’re not being as represented because again, a lot of the programs we have on campus isn’t necessarily targeted to them.”

Yet – said political science senior, former SG president and current senior senator Ayoub Mohammed – every senator who voted against the creation of the committee was a minority.

“Some people interpreted (my dissent) as it was a no to diversity and equity, and we all know that is absolutely not the case,” Mohammed said. “It’s an amazing committee, what they’re trying to accomplish – but they weren’t able to provide the answers as to why they need to create this committee.”

Computer science sophomore and ECS senator Willie Chalmers III said he also dissented in the vote for the committee for several reason, one being that – in light of recent events – establishing the committee might cause SG to no longer be politically neutral.

“I believe that this shift in perception of Student Government is not what we need right now, especially given the history of student government being perceived as a senate full of people who are only looking out for their resumes,” Chalmers said. “I believe that in order for SG to build up or maintain its credibility and reputability in the long term, it needs to focus more on issues that the majority of students have and have been having.”

Another issue he had with creating the committee, Chalmers said, was defining and distinguishing between equality and equity – and that for him, that’s at the heart of the diversity and equity issue.

“I think it is only necessary to ensure that there is equality in the opportunity as opposed to ensuring the equality of outcome,” Chalmers said. “Focusing on equity as opposed to equality leads to perverse, unintended consequences that ultimately negatively impact everyone.”

Chando and Brennan are representatives on the UT System student advisory council, which, Mohammed said, tackles issues with equity and racial injustice across all 14 UT institutions.

“I just don’t think we need it at the local level when it already exists at the upper level,” Mohammed said. “Student Government is already stretched so thin, Student Government doesn’t accomplish as much as it wants to; and I just think by diverting our attention to issues that can’t even be pointed out or even exists at UTD – I don’t know, I just don’t think we’re focusing on the issues that do exist and we’ve already identified.”

There was an extended period of time, Mohammed said, between the 38th vote and the 41st, and that he thinks people almost felt guilt-tripped to vote for it. Mohammed said he even faced backlash following the vote, and said that he felt the process was poorly executed.

“The president’s supposed to remain neutral and Sara was kind of jumping in and going like, ‘Hey, like please vote for this. You know, it doesn’t hurt. It’s better than nothing,’ type of thing. I’m not blaming her. It was only her second meeting, and just maybe she just didn’t know. But it was just mishandled,” Mohammed said. “The vote was visible – which it shouldn’t have been, it should have been anonymous. But it was (visible), so people would just felt compelled to do it.”

Students wishing to serve on the committee do not have to be elected senators, and should contact Thomas Gebremichael – political science senior and committee chair – to get involved. Brennan also said that members of the student body can check the SG website (which will be updated within the next week) for links to the senate meetings. Otherwise, the public can reach out to sg@utdallas.edu for the meeting invites.