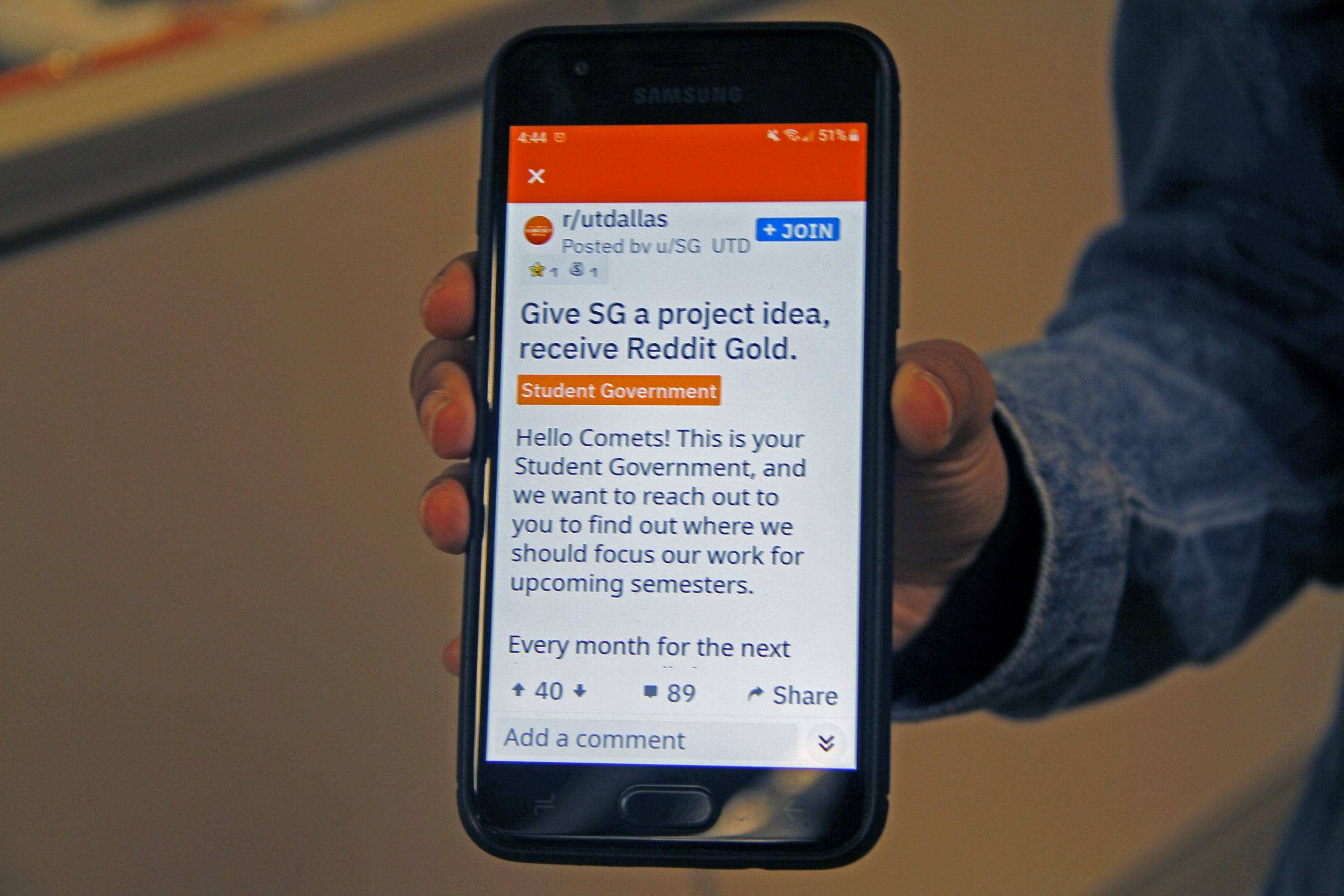 Two ideas suggested on the subreddit are hanging lights around the plinth and adding more printing locations. Photo by Anna Phengsakmueang | Photo Editor

UTD’s Student Government is using a new approach to get ideas from students, now offering Reddit Gold to those who post feasible ideas to the school’s subreddit. The posters get the gold and their idea receives consideration as an SG project.

SG first joined the subreddit over a year ago, but their new initiative is a more permanent attempt to increase the organization’s online presence. Incoming chair of the Technology Committee and biology senior Alexander Quach said the idea for online suggestions came about when existing methods, such as meet-and-greets and suggestion boxes weren’t working well enough.

As leadership of the Technology Committee changes hands, online accessibility is being taken on by Quach. He said having an online platform for discussion was necessary to make sure all students’ ideas would be represented.

“A lot of times, you’ll hear the same suggestions over and over again. You’ll hear a lot of things about parking, you’ll hear a lot of things about food, but sometimes people who might not have the chance to say it will be more willing to share that on the internet,” Quach said. “We weren’t looking for anything specifically, but we were just looking to include everybody because that gives everyone a more fair chance.”

As a part of an SG funded project, the Reddit post is kept clean and on-topic by SG moderators. Outgoing Technology Committee chair and molecular biology senior Yilong Peng said that for the most part, there was very little that needed to be dealt with.

“We’ve had a lot of people suggest project ideas. We’ve also seen a lot of discussion within the separate project ideas as well, which is something that, while we were not expecting, was very nice to see,” Peng said. “We have a full tabulated list of all the ideas that were brought up, all the questions, as well as how many upvotes, which are points that indicate roughly to us how popular they were with other people, and so that’s kind of creates a natural priority list and pecking order for this on how or what order you might want to address those ideas.”

When deciding which responses get Reddit Gold, members of the Technology Committee and its officers will consider both their upvotes and viability. SG President and political science senior Ayoub Mohammed said that many simple projects have various unforeseen obstacles.

“Give us an idea that can be fixed in a physical manner, right? A timely manner as well. Just don’t say something like lower tuition, for example,” Mohammed said. “There’s a lot of factors that go into every single one of these ideas. I mean something as simple as putting up the homecoming lights year-round, there’s a lot of costs. Some ideas we have seen on there, like more printing locations, maybe that’s something more feasible.”

The newly implemented CVS vending machines on campus were suggested on a similar Reddit post made last spring. Mohammed said having the post was important to receiving the perspective of the rest of the student body.

“There may be around 70 of us, but that doesn’t mean we see every single part of campus, or we’re going to see every single point,” he said. “There might be students out there who have ideas that we’ve never thought of, some 30,000 students. Everyone has different ideas, different opinions.”

Vice President and public affairs senior Hope Cory said the idea for the Reddit post came from wanting to be able to benefit other students. By increasing its transparency and visibility, she said it made SG able to access student needs.

“Not only does it give Student Government visibility by being on Reddit but it also gives us transparency, showing the students that we really do care about what they want to be done on campus as far as accessibility goes,” Cory said.

Despite not having officially chosen responses, Cory said there were certain responses she had taken note of. She said responses discussing creating more print stations stood out to her, mainly due to already having been working to create them.

“I think there are a lot of projects that maybe we have in the back of our minds like, ‘This is something that we should probably get done,’ and then students come forward and they’re like, ‘We want this right now.’ That’s something we need to move forward,” Cory said.  “…some of them are things that we’ve been trying to get established and maybe didn’t have enough student feedback.”