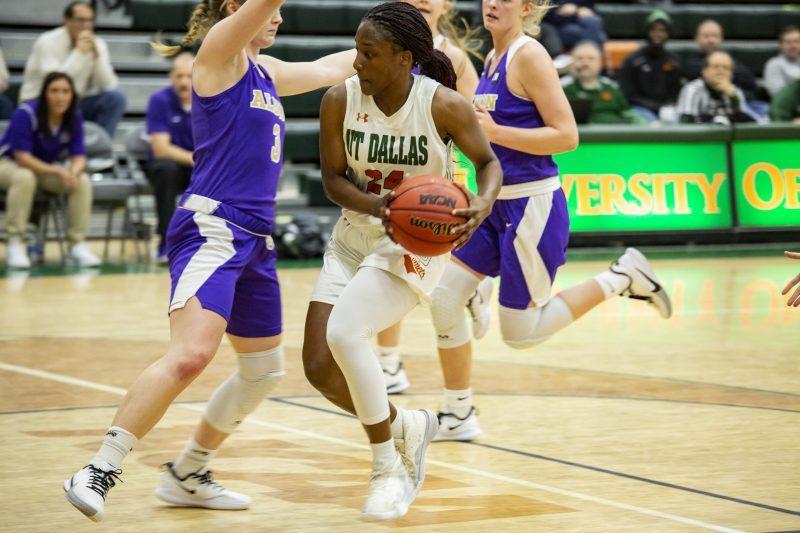 Women's basketball head coach Polly Thomason said despite a rough start in the first few games, the Comets were much stronger in the Dec. 4 opener game. She said they played aggressively and offensively while also getting stops defensively. Photo by Amina Hussain | Mercury Staff

Men’s and women’s basketball won their first American Southwest Conference opener games of the season before starting winning streaks for their respective teams.

“It was a good game that we came out from the tips just playing aggressively, offensively and getting good stops defensively,” Thomason said. “The first half we really looked like ourselves; we really looked like UT Dallas — you know, the team we should be — so I was just really happy to see that because … the first few games we didn’t start off as strong.”

Thomason said that she relied on her returners to be leaders for the team and that her team’s goal this season was to develop into the best team they can be.

“They’ve got experience, and they’re bringing that to the table every game, you know, with Victoria Pena and Raenett Hughes, they’ve always been really good players for us and they’re continuing to do so,” she said. “I mean, for us, I think all it just boils down to is just making the right plays offensively, defensively and trusting that your teammates are going to do their job as well.”

Hughes and Pena have shown out this season, helping the team get an eight-game winning streak. Pena got a record 12 assists at the team’s Jan. 2 match against Concordia Texas, bringing her season total to 67. Hughes was named ASC East Division Women’s Basketball Player of the Week three weeks in a row, averaging over 20 points in the team’s most recent games and hitting a season high with 35 points at the Dec. 15 match against Trinity.

Pena said that the team always has a lot of energy and the teammates have one another’s backs.

“Something super cool about us is that we have a super lit bench,” Pena said. “Whether you play or not or whether you sit on the bench — we don’t care what your role is, you matter to our team.”

“Our kids have to be prepared for every practice and every game. They have to practice well, they have to play well and we have to maximize the skills of our team,” Butterfield said. “I think that we’re good enough to have success against anybody, but I think that we’re also at a point where if we don’t come prepared, anybody can come get us as well and steal the victory away from us.”

The men’s and women’s basketball season ends on Feb. 22, with the last game of the season against McMurry. If the teams qualify for the American Southwest Conference Championship Tournament, they will advance to the first round on Feb. 27. Last spring, both the UTD men’s and women’s basketball teams won the American Southwest Conference Championship. This year, Butterfield said that their goal is to defend their titles.

“That’s sort of what we play for,” Butterfield said. “And if we’re able to win the conference championship, that gives us an automatic invitation to the NCAA tournament, which is the national tournament for division three.”

Butterfield said that the team is working together towards a common goal, and his players want the opportunity to show who they are on the court.

“I really believe that team spirit has to come from within the group. It’s got to be about the quality and character of our players to band together,” he said. “And I’ve got four seniors that are what I call my group leaders who are really important to that spirit and leadership: our point guard — his name is Jalen Weber, Xavier Ferrell is a senior for us, Hans Burwitz is an inside player senior and Dimitrius Underwood, who was an All-American last year and is not participating due to injury this year.”

Senior guard Jalen Weber hit a season high with eight assists at a Dec. 29 game against Blackburn, senior forward Hans Burwirtz was named ASC East Division Men’s Basketball Player of the Week on Jan. 6, averaging 13.8 points and 10.3 rebounds this season. Senior guard Xavier Ferrell has 35 assists this season and got 10 points at the team’s Jan. 4 match against Mary-Hardin Baylor, bringing their win streak to five games. Butterfield said that defense and rebounding make the biggest impact on whether a team wins or loses a game.

Butterfield said that the basketball team must grow upwards and get better every day.

“What I want to be able to say is that look how far we’ve come since December,” Butterfield said. “We have really climbed the stairs — we have climbed that mountain — and we’re much better now than we ever were back in December.”