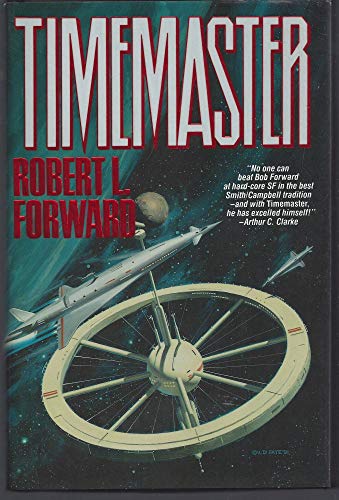 Timemaster provides a disturbing look at a man who gains power through time travel. Photo courtesy of Tor Books

Some books have fascinating premises that grab you right off the bat. Some books have well-written, clever dialogue and snappy explanations of scientific ideas backed by real experience. Some books have all of the above, and go on to be a thoroughly enjoyable story. Robert L. Forward’s “Timemaster” is not one of those books.

While Forward’s premise in “Timemaster” is brilliant, its off-putting blend of unlikeable characters and skeevy content makes this male power fantasy a little too much to handle even for the most patient of reviewers. If you’re looking for an innovative approach to time travel—firmly grounded in real scientific concepts via Forward’s career as a physicist and aerospace engineer—this novel beats out media like “Avengers: Endgame” by a mile. The intelligence of that science, however, is utterly derailed when Forward begins to think with his hormones rather than his head.“Timemaster” tells the story of Randy Hunter, a billionaire industrialist who becomes the greatest man in the universe through his advances in technology, particularly his invention of time travel. After inheriting his wealthy father’s aerospace engineering empire, Randy expands it into providing round trips through the galaxy using the Moon’s gravitational pull as a slingshot, raking in millions from interstellar transportation and shipping as well as through a galactic asteroid-mining operation. Some of his company’s workers on a mining rig in the asteroid belt encounter a semi-intelligent alien lifeform that emits an energy source. (Imagine a Golden Retriever that farts enriched uranium. Now add tentacles.) This energy source unleashes a whole new world for Randy, who soon realizes its potential to grow his business empire and even unlock the mystery of time travel.

It’s your standard science-fiction fare of exciting discoveries at the limits of scientific possibility, pushing into new worlds of invention to create a better future for all of humanity. It’s a premise that can lead to the main character’s destruction, as he discovers the cost of pushing too far into new frontiers and choosing capital gain over relationships and time with his family; it could also lead to wider philosophical questions of who we are as a species in this universe, what life means when it becomes unlimited by time, what right we have to interfere with other life forms’ development and so on. Forward, however, answers none of these.

Instead, Randy spends the novel gaining more and more material wealth, learning next to nothing about himself or the world along the way. He becomes the richest man to ever exist. He marries his girlfriend, has several children, and spends absolutely no time raising them. The only challenge he faces is a high school rival, a football player that always bullied him for his nerdiness, going after him—a challenge that’s swiftly and decisively resolved by the literal intervention of two of his future selves.

Frankly, the method by which Randy…the Randies…utilize the time-space continuum to warn themselves of future events and prepare in advance is the highlight of the novel. Forward’s use of hard science is absolutely fascinating, and worth a read for that alone. The way all three of them come together in the story’s climax is downright exciting, with every piece slotting into place like a well-built Rube Goldberg machine. Narration is also a strongpoint, with Forward finding a way to tell the same scene three times over from each Randy’s perspective in chronological order yet keeping it interesting and fresh in every instance.

“Timemaster” is a brilliant example of both excellent and awful science fiction writing—a duality which is impressive by itself. Forward, while a master of describing theoretical astrophysics in a fairly approachable way, gets a little too comfortable in the novel’s latter half, and lets it turn into an extended self-insertion fantasy. If you enjoy a deeply flawed man becoming the savior of the universe through gaining money, go listen to Bo Burnham’s “Bezos” songs on loop; if you are looking for well-written hard sci-fi, check out Greg Bear. If you’re really here for the time traveling, self-incest space orgies…well, I suppose it is Forward’s time to shine.