Tech thriller breaks ground in some areas, but ultimately aims too wide in topic scope 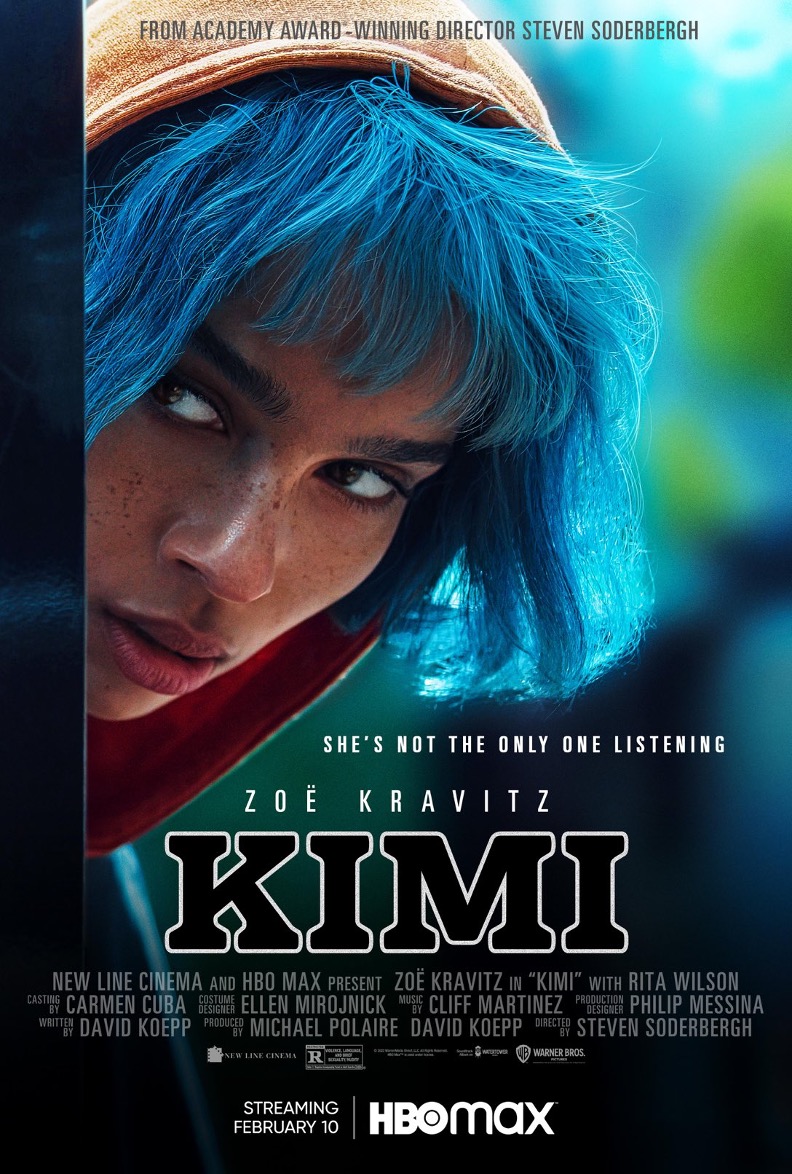 'Kimi' tells the story of a mentally ill tech worker who's witnessed the result of violent crime. Photo courtesy of HBO Max

If you have an Alexa, there could be Amazon employees listening through your audio at any point to improve voice recognition, unless you opt out of contributing user data. So, what would happen if one of these employees came across evidence of a violent crime? Would they try to report it? Or would Amazon avoid claiming responsibility? This is not a hypothetical—it has already happened; it also serves as the premise of the 2022 tech thriller “Kimi.”

Set during the COVID-19 pandemic and released in February, “Kimi” follows the story of Angela, an agoraphobic tech worker who discovers evidence of a violent crime. Angela meets mortal danger time and again in her quest to help a mystery woman she hears in a voice recording at her desk job. In the process, she confronts a variety of social issues relevant to today’s America. While the film breaks ground on some cinematography techniques and social commentary, its overly broad scope proves to be a cheap parody of more meaningful stories.

One of the core issues with the plot of “Kimi” is that it attempts to do too much. Among the modern issues criticized in this film are the effects of technology on society, the intrusion of corporations into the justice system, the COVID-19 pandemic, mental health, sexual assault, inequality and police brutality. These are all problems that have found a prominent place in the public eye in the past few years, and clearly deserve addressing. However, the fact that they are all loosely related to one another does not allow an adequate examination of these issues in just ninety minutes. By bringing up all these issues and then failing to deliver on them, “Kimi” comes across as a cheap attempt at saying something “deep.”

The overly broad thematic scope of “Kimi” is glaringly obvious in its inability to resolve several plot lines. Much of the story seems to be there simply as filler or for shock value. Angela develops a toothache for no real reason, her voyeur neighbor is teased throughout the movie yet barely given any screen time and Angela is provided with a flat, two-dimensional love interest. Most grievously, the movie brings up an assault in Angela’s past for which she was ignored and shamed—and then suddenly drops this idea. While this knowledge informs our understanding of Angela’s character and why her quest is so important, the film never provides a satisfactory resolution to this trauma beyond Angela beating the bad guys and magically healing. To be completely honest, it feels as though there is a solid thirty minutes missing from this film despite the quantity of information the director attempts to throw at the viewer.

In spite of some of its writing failures, “Kimi” makes some strides in its depiction of mental illness. Angela is succinctly characterized by her neurotic quirks. She demonstrates several obsessive rituals—scrubbing herself raw in the shower, compulsively cleaning the sheets, using hand sanitizer more times than one can count and constantly checking the locks on her door. Only later do we see how this may be a response to her trauma—daily routine is something that Angela can control, while her world and mind become increasingly chaotic. Similarly, when Angela discovers a mysterious voice recording of a woman’s brutal murder, she finds the mystery woman was also deemed crazy shortly before disappearing. If Angela doesn’t play her cards right, she could disappear just like her. Even before the plot escalates, however, Angela anxiously hyperfixates on the plight of this woman as if it can make up for her own pain. She asserts: “I always clear my list!”

As previously mentioned, Angela is agoraphobic. Often, agoraphobia is portrayed in media as some nebulous fear of “the outdoors,” with a character having a panic attack because someone tracked dirt into their house. “Kimi” accurately shows how agoraphobia is specifically a fear of being in a public place from which escape is difficult in case of a panic attack—there is a strong social element to this fear, and the audience can clearly see Angela’s slight discomfort around people even in one-on-one settings. My only criticism is that this fear seems to conveniently disappear in the heat of the action. She may have her medication, but benzos can only do so much.

When Angela braves the outside world with the help of copious amounts of Xanax, the film makes some strides in depicting how it feels to reside in an anxious mind. Walking to the train station, the camera suddenly flips upward and out, showing Angela huddled in the corner of the screen. She looks and feels small, and the emptiness of the surrounding space becomes almost suffocating. As Angela walks toward an office building, the camera completely leaves her side to explore the environment, conveying her escalating dissociation and separation from the world.

While this film’s take on mental illness and cinematography is refreshing, it cannot make up for its more pressing plot issues. Even from the start, I had a sense that “Kimi” was taking on too much for one film. The movie shot for the stars and regrettably fell short.