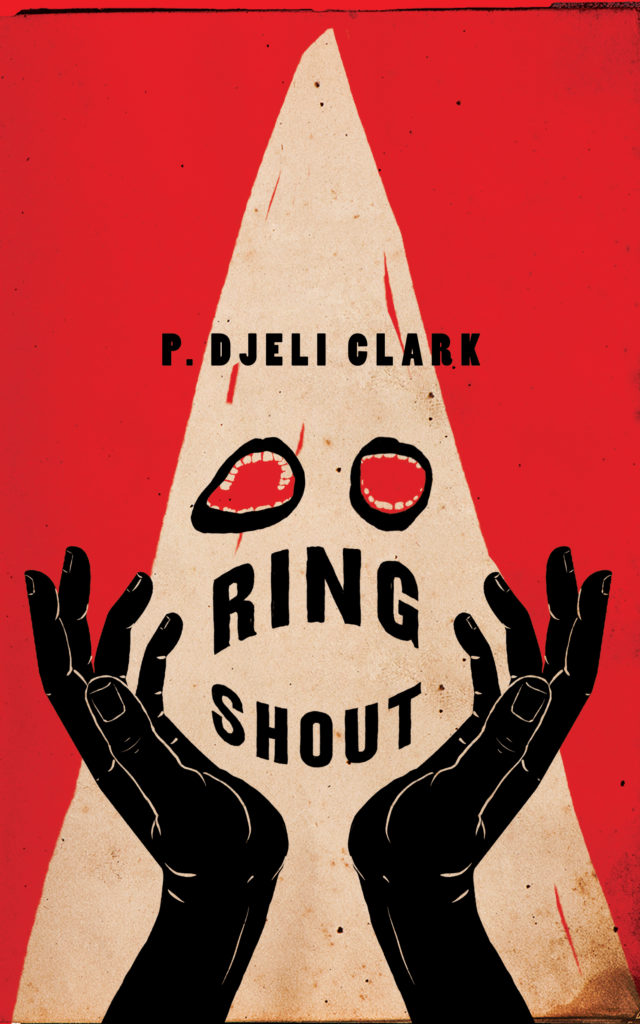 Clark's action-packed novel features a trio of monster-hunting Black women seeking to save humanity from the eldritch horror of the KKK in the post-war American South. Photo courtesy of Tor.com Publishing

That’s right, monsters: “Ring Shout” hosts some of the most skin-crawling descriptions of body horror this reviewer has had the displeasure of imagining, as the release of the Ku Klux Klan’s infamous “Birth of a Nation” summoned up beings from another world to feast on human hatred. The story kicks off in the middle of a KKK march, with three snipers checking it over for monsters walking among men. This is where we first meet the novella’s main trio.

Maryse Boudreaux, a folktale-inspired heroine wielding a cursed sword and a vendetta against the Ku Kluxes for killing her family, narrates the main story. That alone is a compelling lead for any tale, but every one of Clark’s characters breathes life into the story’s setting. Maryse meets Sadie and Cordelia in a community of Klux-hunters living in Macon, each of which could star in a spin-off series. Cordelia Lawrence, going by “Chef”, is freshly returned from World War I, having fought with the Harlem Hellraisers disguised as a man; Sadie is a staunch conspiracy theorist, a great source of comedic relief and humanity in a story this dark. All of them come together to fight the supernatural, delivering witty banter alongside a scathing criticism of white supremacy. Perhaps Clark is drawing an intentional parallel to the way Black women have historically led the fight for civil rights, from Rosa Parks and Marsha P. Johnson to modern pioneers like Tarana Burke.

Historic events play a large role in the narrative. Clark’s background as a historian and academic shines through his writing, which deftly weaves elements of African and American Southern folklore and events into a cohesive narrative. Inspiration for different facets of the story comes from a variety of sources. The Ku Kluxes are Lovecraftian, coming from a dark world parallel to this reality and feeding off of human hatred to grow more powerful. The matriarch of Macon’s KKK-hunting found family is a Gullah woman, using ring shouts–a spiritual dance form that blends Central and West African tradition with Christian prayers–to ward off the monsters.

I will admit: I was initially worried about this characterization of Klansmen as otherworldly monsters. “Abraham Lincoln: Vampire Hunter,” while a tremendous movie for fans of terrible movies, strikes the wrong note in scapegoating vampires for all-too-human slaveholders’ crimes. Clark makes it clear from the start, however, that these beings came as a result of human activity, and that the ultimate blame for racism, violence and the horrific acts of the Confederacy rests squarely on our shoulders. Fans of “Lovecraft Country,” “American Gods” or that one “Supernatural” episode about tulpas may find this familiar territory—it is human hatred that gives the Ku Kluxes power.

Clark does not shy away from questioning the Black main characters’ responsibility in fighting them, either. After all, as a character poignantly asks, “What we owe this world that so despises and brutalizes us? Why lift a hand to save it when it ain’t never done a damn thing to save us?”

Still, lift a hand they do, in one of the novella’s highlights: epic fight scenes. The adrenaline and power throughout them are clear, keeping you on the edge of your seat and onto the next page well into the night. I actually ended up powering through this in one sitting, temporarily transported away from mid-semester stress and enthralled by Maryse’s determination to protect her newfound family and avenge her old one. This would make an amazing movie, if not a longer-running series, with its striking visuals and electrifying fight scenes that could give Marvel a run for its money.

Despite those pulse points of action, however, the novella does drag a little in its exposition. Time spent on exploring this world’s magic system, the history that backs the rise of the Ku Kluxes and fleshing out details of the setting but aren’t quite revisited take up precious space in a story this abbreviated; the length of a novella doesn’t allow for much explaining. Even with those longer moments, however, it stays exciting, returning to the action well before you’re lost in the lecture.

Hence my excitement at seeing Netflix announce it for series development (starring Kiki Lane of “The Old Guard”): perhaps that will give more space for the exposition to relax and Clark’s brilliant characters, insightful history and thrilling action to shine.

An e-book edition of “Ring Shout” is available for loan through the Eugene McDermott Library.