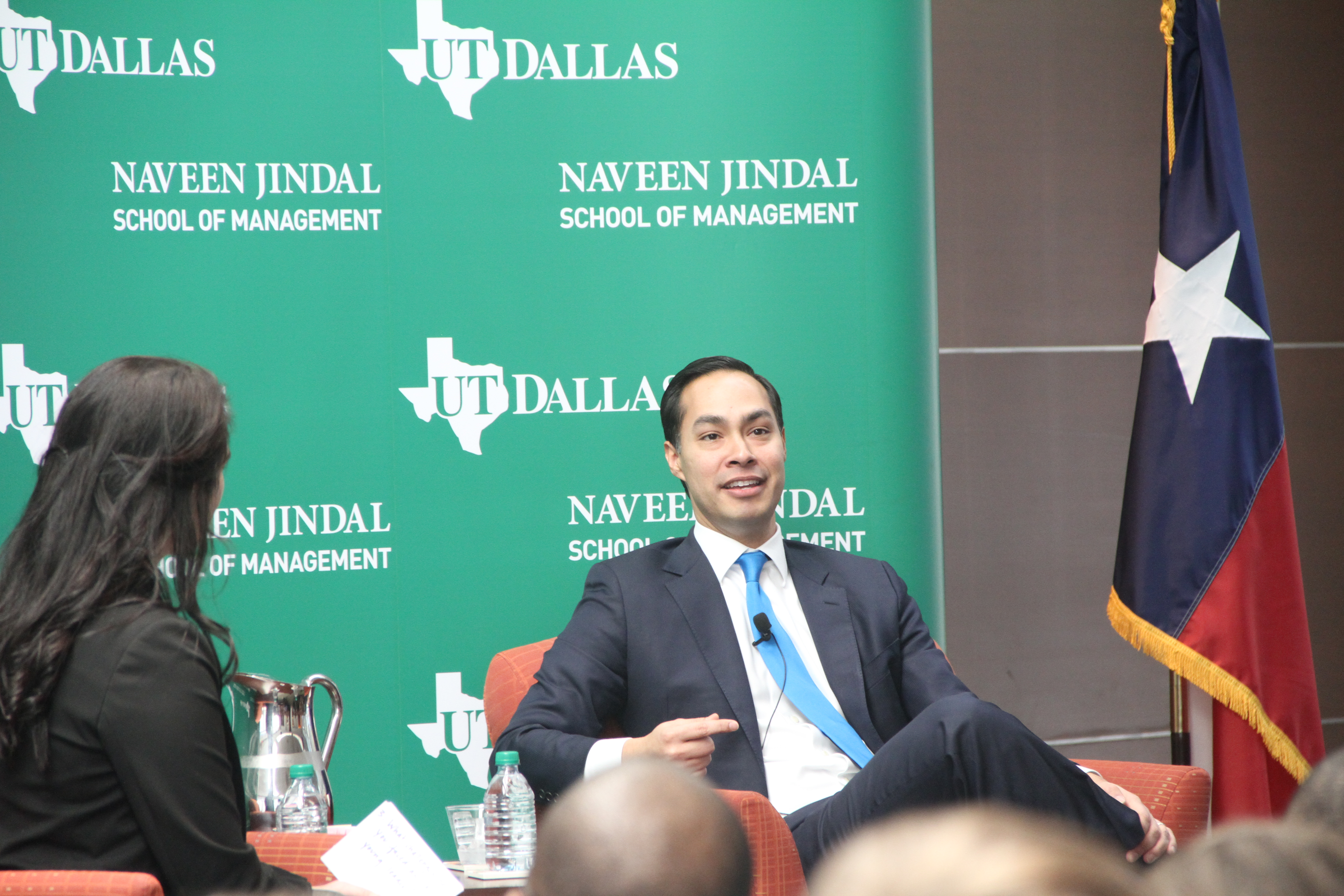 On Feb. 12, Julian Castro, the Secretary of Housing and Urban Development, came to campus to talk about diversity in leadership. The Mercury had a chance to talk to Castro about the election, his job and his plans for the future.

Q: What is your opinion on the drive in the upcoming election to subsidize tuition?

A: My hope is that we will see greater efforts to keep tuition costs down — whether it’s in public universities or private universities through some of the traditional tools like Stafford loans and Pell Grants and Federal Work Study. We have a generation of students who are graduating with way too much debt, and that’s limiting their ability to buy a house, it’s limiting their ability to reach their dreams and to be able to provide for their families. We need to change that, and so I’m glad that some of the candidates running for office this year have put forward proposals to either completely make college tuition-free, or to achieve it so it’s at least debt-free for students.

Q: Is there any weight to the rumor you’d be Hillary Clinton’s pick for Vice Presidential nominee if she wins the election?

A: I fully expect to be back in Texas this year at the end of this administration. I’ve said that I don’t believe that’s going to happen and I’m just trying to do a great job at (Housing and Urban Development) right now.

Q: Do you think being a minority has helped or hindered your career in politics?

Q: How do you think growing up in Texas shaped your political outlook?

A: Texas is a very special place and San Antonio is a unique city. I think that, in Texas, the best way I can describe it is people want things to be on the level. They want things to be basically fair and straightforward and I think I carry that perspective with me, even now as I serve in Washington D.C. at HUD. There is a certain ethos here that has followed me.

Q: How did you decide to accept the secretary position at Housing and Urban Development?

A: More than anything else, I felt like it was a great opportunity to have a broader impact. As satisfying as being mayor of my hometown was — and it really was a thrill (and) I intend to get back there as soon as I can — I felt like I could make a broader impact in this role. The other thing that I thought about — and I had this thought the other day when we were at the National Prayer Breakfast and I was watching the president give his speech — is that it would be something I’d be able to tell my kids and my grandkids, that I served Barack Obama in his administration. And as cantankerous as the debate is, I really believe basically in 20 years, 30 years, folks are going to see Obama in the way Republicans try to hail Reagan. That he’s going to be, I think, even broader than Reagan has become and that it will be very honorable to say that you got to serve under this president.

Q: What led you to support Clinton for president over other candidates?

A: I really believe that Secretary Clinton is somebody who, number one, is progressive. And so I share that viewpoint. Secondly, (she) can get done what she said she’s going to get done. And you can tell in these debates, whether it was before O’Malley left or now one-on-one, there’s not really a comparison in terms of knowledge base there. Of all of the political figures that I’ve seen, she has a command of the issues and an understanding of them. I also believe that her presidency would be groundbreaking. When my daughter was 3 or 4, we were … getting her ready in the morning and we had “Good Morning America” or one of the morning shows on and an image of the president came up and … I told her, “Oh look, there’s the president.” And I said, “You could be president one day,” and she said, “Oh, that’s for boys.” She actually said that. Now as a dad, you start to (think), “Where in the world does a kid that young get that idea already?” I look forward to November of this year and she and I can watch TV and Secretary Clinton gets elected, and I can tell her, “It’s for you, too.”

Q: How has your relationship with activism developed from your upbringing in an activist household to working for the government?

A: What we’re talking about is how people are treated. Let’s just take an example of the issue of policing of communities and all of the bad actors and institutional problems and the wrong approaches that we’re seeing some local police departments take over time. I believe, for instance, that in too many police departments, even though I agree with folks saying the majority of police officers (do) the right thing and they are good officers, that a lesser value has been put on the lives of African Americans. What practically can you do to combat those kinds of issues? So, first of all, try to (get) a more diverse police force, training folks better, ensuring that they understand the community more, that more police officers come from those communities in the first place. In other words, I think that when you start to break down a lot of these challenges, they’re inveterate and they’re very tough, but they’re not something that we can’t do or address.

This was a well conducted interview. The Sanders-Clinton dilemma has been the top thought for many women who don’t want to vote based on gender alone, and that is true. Full disclosure: I am not eligible to vote. However, if I could, to me while Sanders seems like a solution to all problems that we have, pragmatism dictates a vote in favor Clinton. After all, we can’t forget Congress and that all ideas have to fly through there first.