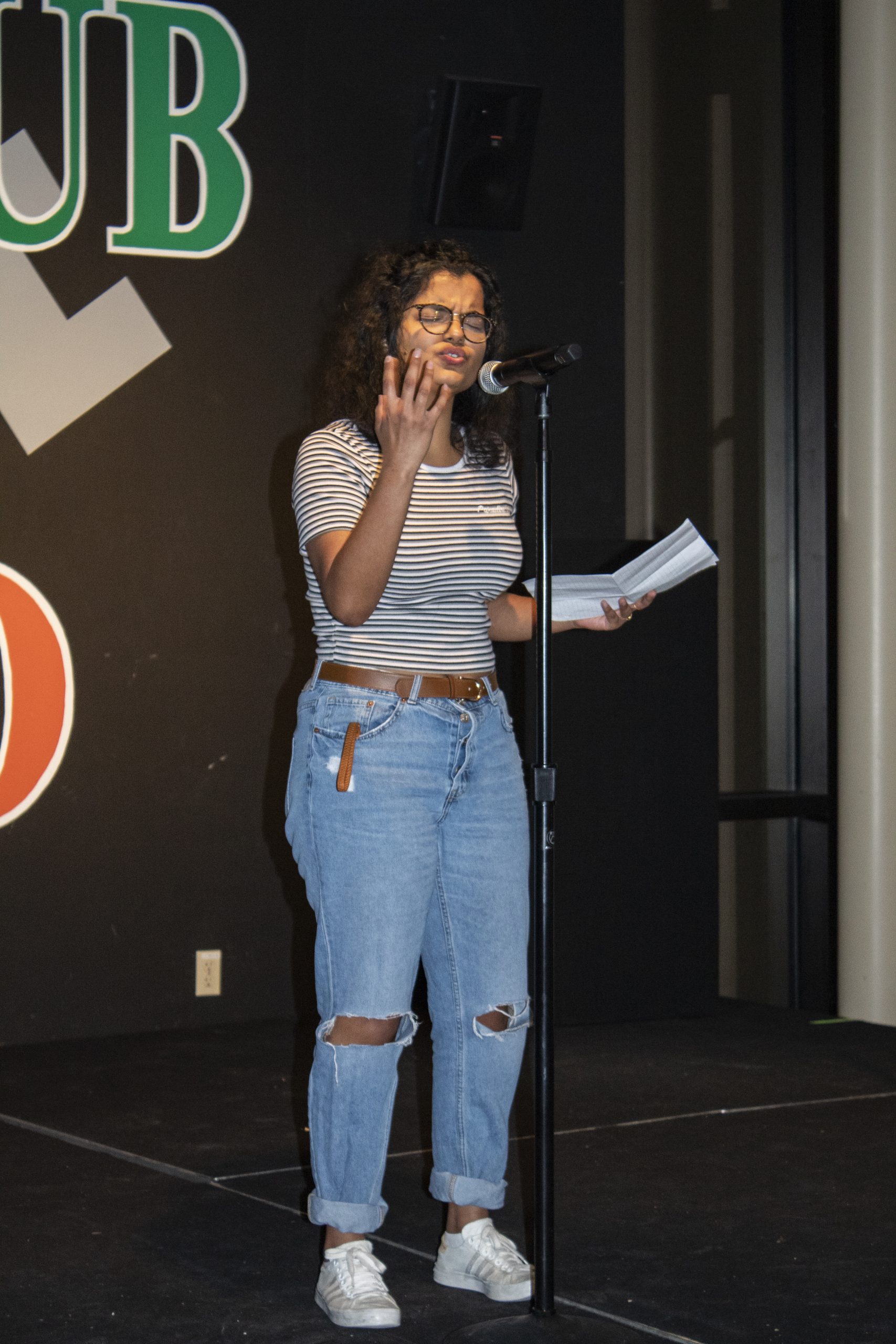 “But I still can’t say goodbye,” said Ashmal Naveed, speaking her final words and softly closing her book. The room held their collective breath before leaping out of their seats and bursting into applause for Naveed, one of several students who performed at UTD’s Diversity Poetry Slam Contest.
In order to be a part of the contest, which took place Feb. 28, each of the contestants had to attend the three workshops that Joaquin Zihuatenejo, contest facilitator and successful poet, taught in the weeks prior, where they learned the skills that they would need to apply for the final performance. Although he was satisfied with the final products that the students created, his goal was to have them gain something, Zihuatenejo said.

“One of the things that I think that every group, every cohort, that’s been a part of this workshop series has walked away from is just how incredibly diverse UTD is and how wonderful it feels to celebrate that diversity on a stage in front of their colleagues,” Zihuatenejo said. “Seeing that look of satisfaction in their face when they’re sharing their voice and their story about their collective ‘we,’ or about their sense of self. There’s not much better feeling as a facilitator and teacher that that I could have.”
The performances were designed to allow UTD students to reveal their own stories of struggle, joy and hope, as Zihuatenejo had intended all along. The impact that he aimed for, however, was not intended to be short term or on a small scale. Rather, he hoped that the students would leave the experience inspired to continue writing, Zihuatenejo said.

“For me, I’m hoping that it makes them want to write poems and tell stories and write them down. Because the world is desperate for stories, right?” He said. “And the world is desperate for poems now more than ever. We need more writers who look like you, whoever you are. Whether you’re a woman, or queer, or whatever you identify as for your collective, we need more of your voices in the literary world.”

Not only has Zihuatenejo been able to impact others with poetry with his own work, but by teaching students with his love of poetry, he has been able to inspire a new group of poets who can go out and share their ideas to the world, as Jayraj Dave, a JSOM information technology and management graduate student, said. Dave tied for second place at the competition on his piece about grief and acceptance after a break-up. Zihuatenejo helped open the pores of his mind to communicate to the world through poetry, Dave said.

“I’ve always been an introverted person, so that’s why I often find art forms to express myself,” Dave said. “I cannot really simply express myself. So this is an integral part for me to express subtle human emotions about me and about the world in general.”

By going through the process, Dave not only learned to perform poetry to others but better appreciate poetry’s value for himself, Dave said.

His passion for poetry was clear to Zihuatenejo, for in the workshops before the contest, Dave asked to video call into the sessions because he was a 28-mile drive away from campus. Another poet who shared the second-place title with his collaborator is physics graduate student Ved Agarwal.

“Poetry is love; poetry is passion,” Agarwal said. “For me, poetry is a thing that hits your mind, but deep down, you can feel it straight into your heart. So, the heart and the mind become one.”

After the first workshop, the poets were asked to share their stories: how they went through pain and how they healed from it. For Agarwal, he had two focuses.

“As a boy, the pain started from the girl I loved when we got separated,” Agarwal said. “The next pain which I feel is the look of sympathy in people because of my problem of stammering.”

Agarwal’s collaborator on stage was ATEC faculty member Ayen Kuol, who saw the power in Agarwal’s words and asked to collaborate with him. Initially, both poets had individual poems they were going to present. While Agarwal’s poem talked about the loss of a lover, Kuol discussed a controlling mother figure who nurtured, yet took away the freedoms of the ones she loved. Both of the traumas that the poets went through were combined into one poem where they could find healing together, Kuol said.

“What I wanted that poem to bring out was truth and honesty. That healing process is not clean, it’s nasty,” Kuol said. “Healing is messy. It’s not sit down and meditate. It’s realizing things that make you want to run away from yourself. But in the end, healing does happen. That is what I wanted the audience to understand.”

Another poet who was able to truly introspect was psychology senior Ashmal Naveed, the winner of the contest. Her piece was about her childhood story in Pakistan at 15 years old, where she left for America while trying to come to terms with her feelings for a boy. By sharing her story, she wanted the audience to take something away from it, Naveed said.

“It’s okay to feel,” Naveed said. “I feel like we’re always scared of our emotions and talking about things that hurt us or things that we’ve been healed from. And the one of the main things is that it’s okay to keep feeling it, even if it’s something that’s hurting, or something that makes you so happy. Keep feeling it, keep experiencing it, because that’s how you learn and grow.”

Although she wanted the audience to come to that conclusion, the process of writing the poem allowed her to reach that conclusion herself, Naveed said.

“Writing about something that happened so long ago, I was kind of reflecting, okay, I was going through that at that moment, and I’m totally in a better place right now,” Naveed said. “I’m better emotionally and whatever I’m doing with my life. So it’s very calming and reflecting that you see where you were before and where you are right now. It just gives you the perspective that you need. There’s so much better ahead of me.”

At the end of the night, the people in that room felt more connected to each other, and humanity, Zihuatenejo said. But the effects of the poetry didn’t stop that night. Rather, Zihuatenejo said, he was only a small part of the poets’ very large lives.

“It starts with the poem and the mic, and then it ripples into the room. Then those people go to their families and their homes and their communities,” he said. “They talk about what they experienced, and they grow from it. It’s what I love about poetry: it connects us to our humanity. I think so many of the poets tonight did that; they connected us to their humanity and our shared humanity.”