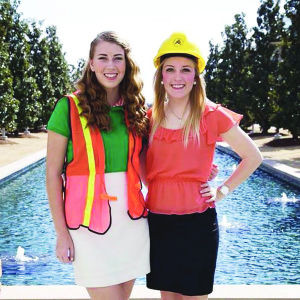 As each of the newly elected Student Government senators were named on the evening of March 26, Brooke Knudtson knew it was a good sign that most came from her ticket “Building Bridges.”

The pair ran against EMAC and marketing junior Katie Truesdale, and electrical engineering sophomore Alex Zahabizadeh — the presidential and vice presidential candidates for the ticket “Forward.”

Part of 2013’s low turnout may be attributed to the fact that only one ticket ran in the election. This year, the two tickets were led by members of the same sorority, Kappa Alpha Theta.

The election became a taboo topic among the Thetas. Knudtson said she knew it was going to be a split vote among the sisters; she and Truesdale didn’t campaign within the group.

“We just wanted to (keep the election) outside of Theta,” Knudtson said. “I’m sure it’s going to be a little awkward for a little bit, but other than that I think it will be fine. I’ve worked with Katie before in other SG things and for 5Ks and stuff. It’s like another professional relationship.”

The platform for Building Bridges is to improve spirit, tradition and community across campus; the three areas Fairbank said most students have asked them to work on.

Apart from the Whoosh, Knudtson, a political science sophomore, said there aren’t enough traditions on campus to bring students together. Additionally, communication must be improved to make students more aware of campus events, and in turn, increase student attendance. Knudtson said she plans to mandate senators attend a certain number of events and sports games in order to increase SG’s presence on campus.

She pointed to the men’s basketball team’s game against Chapman on March 7, which broke a record for number of attendees, as an example of Comet spirit that should be evident every day.

“If we can have that sort of energy throughout campus, that kind of spirit, that’s what we’re looking to build upon…,” Knudtson said.

But adding food options on campus — particularly tacos and vegetarian dishes — is also a top priority for Knudtson and Fairbank next year.

Chartwells currently has a contract with UTD, and thus a monopoly over the food options that are available on campus, Fairbank said. She and Knudtson plan to present a petition to Chartwells to pressure them to either lease out space to more vendors, expand their own menu or allow an off-campus vendor to sell their vegetarian food on campus.

“I think that if we can show Chartwells that there’s a very large desire for that, they’ll be more receptive,” Fairbank said. “It should be beneficial to them as well, because if students are willing to pay for vegetarian options, they should be willing to do that to help their business.”

Fairbank, whose brother Nate served as vice president in 2012-13, said she looks forward to leading a diverse group of senators, but is also nervous about accomplishing all of the initiatives Building Bridges has proposed.

“The UT Dallas administration is great, they’re really helpful, but it’s such a large bureaucracy to go through,” she said. “So I hope to do as many as possible and hopefully the very important ones, and I know that that can be a difficult process.”

Immediately upon taking office, Fairbank said she and Knudtson plan to improve SG’s outreach so they may better hear students’ needs and set their agenda for the year. This will include having senators attend Student Organization Center meetings and holding office hours in places around campus.

Ultimately, Knudtson said she hopes to collaborate with the student body to improve the feeling of community across campus.