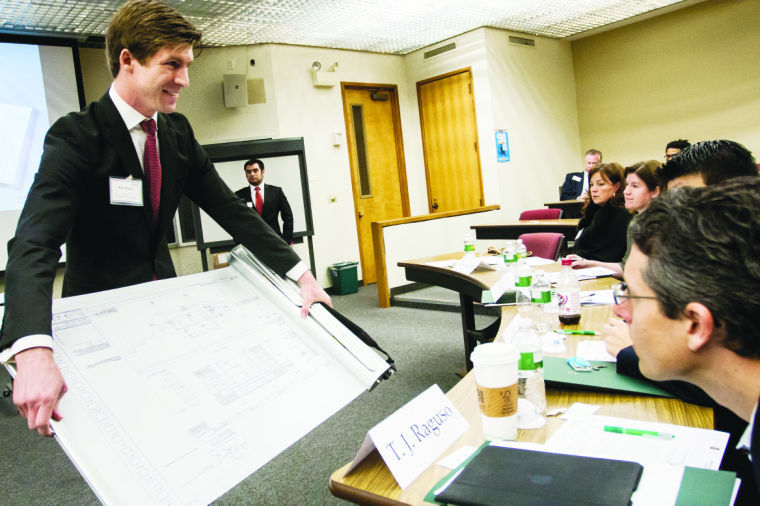 Rollout provides a novel hardware and software solution to enable scalable and full-size paperless blueprints for customers in the architecture, engineering and construction industry. The idea originated from Hinson’s experience in industry where he observed the need and advantage of going paperless, Jacobo said.

Conventionally, updates to paper blueprints are slow and inefficient, and existing approaches using tablets or television screens are either too small and battery hungry, or too bulky for portable applications, he said.

The most challenging aspect of the hardware design, Jacobo said, was the implementation of the display.

“We are in the final talks with our supplier for our flexible screen,” he said. “We have talked to manufacturers, and when it comes to the (Central Processing Unit) and other hardware, it’s not as challenging as you would think since there are people who can do that now.”

Rollout is on the cusp of creating its first prototype and already has interested customers.

However, launching Rollout has not been without ups and downs. Mutual support from co-founder Hinson has led to their resiliency, and a strong partnership has enabled the progress of Rollout, Jacobo said.

“Matt is a tremendous leader, and when you have the right partner, you can get to the next level,” he said.

The lower capital investment requirements and quick development of software startups are reasons why investors may pass over hardware startups, but hardware is still essential as a platform for new services much like smartphones are to apps, Jacobo said.

A lack of media coverage has added to the prevailing view that there are few hardware startups, said Dan Bochsler, senior lecturer at the Jindal School of Management and member of the Metroplex Technology Business Council.

“It’s part of what we see,” Bochsler said. “There are plenty of hardware startups, but I think we hear more about the software startups because they are easy for a broad range of people. There are many phone apps that we hear about that are actually more of a cottage industry instead of being oriented towards a business.”

Despite the focus on software startups, launching a hardware startup company is possible for anyone with an understanding of how to develop a new company, Bochsler said.

Exploration is necessary before execution, meaning a careful understanding of customers is essential before releasing a product, which can be explained in a two-step process, he said.

“First, customer discovery, which is understanding customer wants and needs, competition and market,” he said. “And second, customer validation, which involves the construction of a minimum viable product (prototype) that will give customer feedback.”

Students interested in learning more about launching a startup company or becoming involved in the DFW startup community can participate in organizations like the Richardson Chamber of Commerce or the Metroplex Technology Business Council, but it is also important to focus on networking in general, Bochsler said.

“It’s not just about a technical bent; it’s about finding the right people and organizations that can assist you in development,” he said.

LaunchDFW and Network After Work Dallas are a few organizations that are useful for building a professional network, Bochsler said. In addition, there are several relevant courses offered in JSOM.

“We have startup classes and other innovation courses that any student across campus can take as an elective, as well as a startup launch track in which students can vie for up to $25,000 — with no strings attached — for the development of their business,” he said.

The startup launch classes are ENTP 6360 and ENTP 6361. Other entrepreneurial courses can be found under the prefix ENTP.

Ultimately, no matter if the startup is hardware or software based, both Bochsler and Jacobo agreed that it is important to understand that products are used to accomplish a job, and that capturing value is essential in developing products that customers will want to buy today.