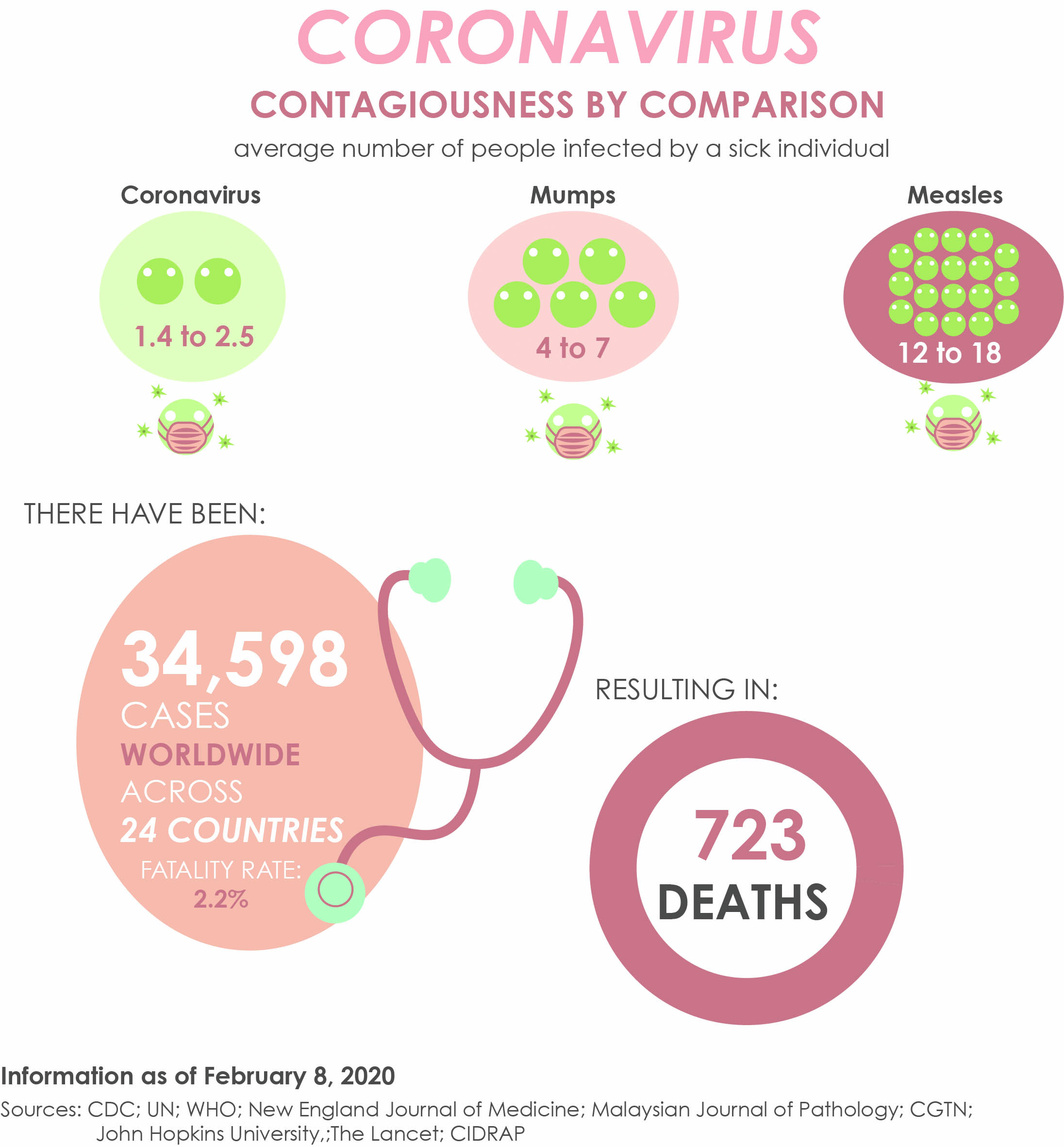 Recent reports estimate over 34,000 cases of coronavirus worldwide, with 0.0003% of those cases in the U.S. Despite the low case rate, media coverage of the virus has sparked nationwide concern.

Coronavirus refers to a family of viruses usually found in animals that are also responsible for the common cold. The latest strain, 2019 novel coronavirus or 2019 nCoV, made the jump from an animal carrier to a human host in December in Wuhan, China. The first case was reported Dec. 1 and has led to 723 deaths, giving it a fatality rate of approximately two percent. This makes 2019 nCoV less than half as deadly as Severe Acute Respiratory Syndrome, a different strain of coronavirus that first appeared in 2002. Associate professor of biology John Burr said that the 2019 nCoV’s genome has a unique feature that makes it less harmful than originally thought.

“It turns out the coronavirus genome is quite large. The coronavirus RNA polymerase can actually do what DNA polymerase does,” Burr said. “If it makes a mistake, it can be detected and go back and correct it and then continue on again.”

The 2019 nCoV is believed to have spread from Wuhan’s food markets and originated from a bat. While bats aren’t commonly eaten in Wuhan, they are known carriers of disease and can spread diseases to other animals, which are eventually consumed. Burr said that viruses typically use a host’s immune system to eventually kill them.

“It’s often not so much that a virus that kills you, but your own immune system kills you. It’s called a cytokine storm,” he said. “Some viruses, especially the 1917 Spanish flu that killed so many people, really super-activated the immune system and it was the inflammatory response of the immune system, all those cytokines that actually was lethal. So, I suspect that’s gonna turn out to be true for coronaviruses.”

Bats have a natural ability to suppress the inflammatory response normally activated by viruses, which is why they’re such good hosts. They allow the virus to maintain the ideal environment to replicate and spread without killing the host. Despite the sizable death toll, 2019 nCoV has killed far less people than the flu. The CDC estimates 12,000 deaths occur from the flu every year in the U.S. alone. Burr said that the widespread concern over 2019 nCoV despite the existence of deadlier diseases isn’t abnormal.

“It’s just human nature. I mean, would you not be a little bit iffy? I wouldn’t go to campus today if we knew that there was a massive outbreak of the newest strain of flu going around on campus here,” he said. “Probably not going to kill you if you get infected, but it’s a damn unpleasant experience to go through.”

The spread of the virus has led to criticisms of Chinese cuisine and increased racism toward Asian people in general. UC Berkeley came under fire for listing xenophobia as a common reaction to the 2019 nCoV. Several posts on social media, including the UTD subreddit, have made jokes about avoiding or fearing Chinese people. Assistant professor of instruction of sociology John Malek-Ahmadi said ethnocentrism, or a sense of cultural superiority may be part of the problem.

“Although there’s plenty of Americans who eat Chinese food and Japanese food or all sorts of Asian cuisine, they’ll make excuses for it and say, ‘Well, that’s not our food.’ And so when something’s wrong with it, or you know, there’s an outbreak like this, it’s easy for people to say,

‘Oh, well that’s, that’s something caused by other folks,’” he said. “It’s kind of the ‘othering’ process takes place wherein if you have a virus like this one that has originated in a particular country, it’s really easy for people many miles away to ‘other’ them, to dehumanize people and to treat them negatively as a consequence of that. Because they’re not really seeing the humanity in it.”

Malek-Ahmadi said people are so quick to label certain groups of people as “other” due to tribal instincts despite the fact that there are more genetic similarities across races than within them. Media sensationalism also has a role to play in public reactions by causing widespread concern, he said.

“You’re scrolling through your feed on your phone and you’re seeing stories about this coronavirus. You’re hearing it on the news, maybe people are talking about it, certain circles at work and when it becomes sensationalized, of course it seems like it’s a bigger deal than it actually is,” he said. “Then, of course when people are scared, they tend to act irrationally and they’ll go back to those baser instincts. And that’s where you’re probably getting the racist comments from.”

The incubation period for the virus is about 14 days and 2019 nCoV is actually less contagious than the flu. No deaths have occurred from the virus in the U.S. and no confirmed cases have been reported in Texas.